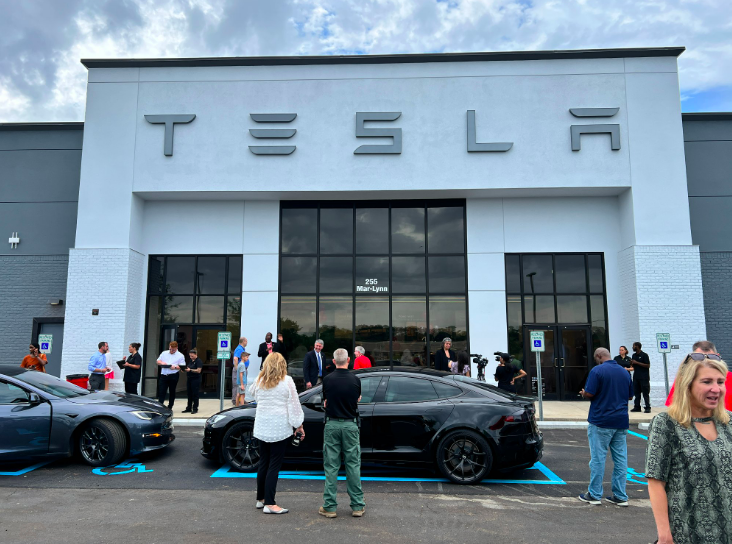 Mississippi welcomed its first Tesla store with a ribbon-cutting ceremony. WJTV reported that Tesla opened its first “dealership” in Brandon, Mississippi and those attending the ceremony were able to test drive some of the vehicles.

“This is not a typical dealership. This is a build it and bring it to the consumer.”

The Mississippi Tesla store used to be a fitness center.

The new store used to be Courthouse Fitness and a physical rehabilitation center for UMMC. Local developer RCI, LLC, and Trihelm Properties have been working together to bring Tesla to Brandon, MS.

In May, it was noted that this would be for a Tesla store; making it the first of its kind for the State of Mississippi. The city of Brandon shared a short message of welcome To Tesla on their Facebook page.

In the photo below, the members of the local community got to see the Tesla Model X do its Chrismast carol dance. For Brandon, Mississippi, Tesla brought them Christmas in July.

Mississippi’s acceptance of a Tesla store is an example set for the South.

I live in Louisiana, a state neighboring Mississippi. And I’ve lived in Georgia and Texas as well. Here in the South, many are seen as stuck in their ways.

Things are much slower here. We take our time and have various versions of southern accents. And some of our politics are not ideal.

I don’t know much about Mississippi and I’ve never lived there. But Louisiana is an oil state. So is Texas.

I think Tesla’s move to Texas will help its mission despite the criticism that Elon Musk being supportive of the Republican party is bad for Tesla. The Republican Party is known for its preference for big oil to clean energy.

I think Elon and Tesla will change this. It won’t be immediate or fast-paced but slow and steady. Hopefully, other states such as my own will see the difference Tesla is making in Texas, and see how Mississippi embraced a Tesla store, and be more receptive to new ideas.