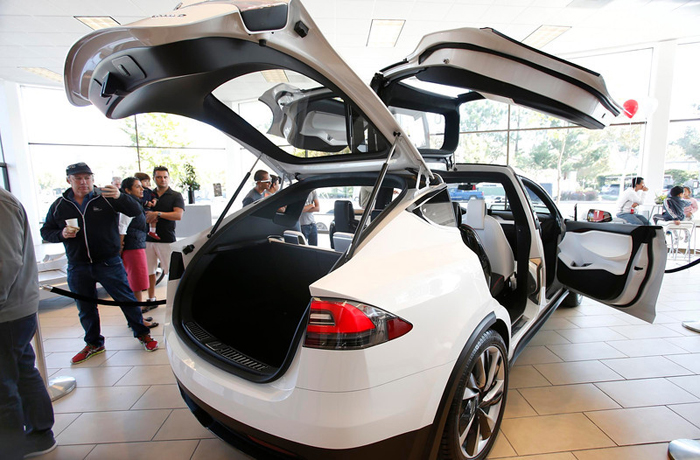 The Model X at Tesla Motors gallery back in the fall of 2013.

2015 is sneaking up on the automotive world and the Model X crossover vehicle deliveries are targeted for the 2nd quarter in 2015 for Tesla Motors—starts April 1, 2015—but vehicle validation prototypes have been noticeably absent from California roads this fall.

With Elon Musk’s legion of fans and electric car enthusiasts on social media, a delay released being floated by industry analysts and journalists may be a reality.

Voelcker says,”I think it will be delayed. The fact we haven’t seen the nearest hint of a production ready Model X for a car, theoretically, that’s going into production in six months or less would seem to indicate that they are taking its time to develop it.”

Voelcker adds, “I rather suspect range issues (with the Model X crossover). That car is bigger, heavier and has a much greater cross-sectional area than the Model S. It also has all-wheel drive and I think they have to get range somewhere between 208 and 265 miles and that my be proving to somewhat of a challenge…I don’t know.”

In a previous conference call this year, Musk emphasized the steep production rollout needed for the Model X, due to a large number of reservation holders at this point. The company can’t afford a slow rollout of production vehicles as they did in 2012 with Model S sedan.

The wildcard here is that maybe Tesla Motors has been testing the Model X crossover vehicle in a more covert way. It’s possible, but the Model X  needs exposure and I’m sure that’s part of the social marketing plan when its ready for testing.

Looking back on the big “D” event in Los Angeles, this may have been a marketing puzzle piece to divert attention away from the all-wheel drive Model X—same drivetrain in the new Model S 85D. Obviously, as I have pointed out in other posts, the Model S 85D is a very strategic product innovation for the luxury class segment and great positioning for the company.

We should get the answer on Wednesday during Tesla earnings conference call and this will probably push the stock considerably lower (full disclosure: I’m a Tesla stock owner). The stage seems set for short-sell run on the stock for the near term.