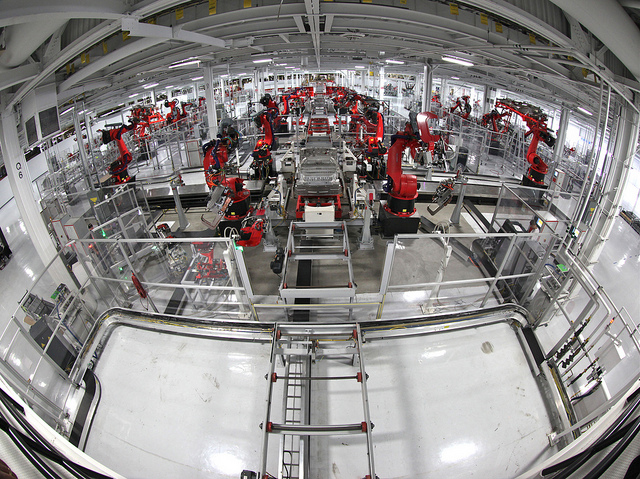 11/20 Update: Looks like the two issues surrounding the Model X, heavy falcon wing doors and lack of battery range, have some pointing to BMW’s carbon fiber material, according to ValueWalk.

Tesla Motors earnings conference call provided some revelatory bits of information from Elon Musk and company, with one particular interesting item: the front electric motor in the new all-wheel drive Model S 85D could be in some shape or form in the Model 3 sedan.

(**Of note, Musk mentioned that there will be no more Performance 85 Model S without all the wheel-drivetrain; aids Tesla Motors manufacturing efficiency.)

Musk “seemed to indicate” that this new front motor in the all-wheel drive could be the prototype for the 2017 Model 3, mass-market electric car. This was in response to one analyst’s question on whether the delay with the Model X launch will affect the release and R&D for the Model 3 electric car?

Musk says,”The development of the small motor for the the dual motor car (Model S 85D), and smaller drive unit, in a lot of ways, is a precursor for the Model 3. It represents a significant improvement in cost, in steady state power, a number of other factors. It’s basically—it’s like a second generation motor essentially, that’s a good pathfinder for Model 3 on the powertrain side.”

But what about the Model X? What exactly are the challenges?  Musk’s comment were pretty cryptic.

Musk says, “We could certainly—it would be quite easy for us to make one (Model X), a handful of production units that are saleable and don’t really move the needle. So, what really matters is at what point can we get to scale production of a really high quality car and that’s really in the third quarter. We also learned a lesson in manufacturing that you have issues that are sometimes one out of 100, but unless you make 100 of something, you don’t see it.”

A cautionary manufacturing approach is smart considering the very slow rollout of Model S sedans in 2012, but I’m not buying this “manufacturing” spin—though mainstream media has been.  The non-answer seems to point to what Green Car Reports’s John Voelcker mentioned in late October: battery pack range issues for a really heavy SUV/crossover.

Musk mentioned that the Model X version is close to a “Beta version,” and let’s hope this is true. They need this car to be a success and provide much needed revenue, a bridge vehicle to the Model 3.

Baron says, “As a result, they are developing electric expertise so slowly that the lead Tesla has built up through its fast growing staff … may soon become insurmountable.” So, maybe this dual-drive technology for the Model X and Model S 85D will pay off.

As an aside, make sure you read the Motor Trend article, “2015 Tesla Model S P85D First Test,” describing their road test with the Model S all-wheel drive Model S 85D. Love these prose gems from the article:

But scrambling to the same 60 mph time in the P85D bears no resemblance to that at all. With one transmission gear and no head-bobbing shifts, it’s instead a rail-gun rush down a quarter-mile of asphalt bowling lane. Nothing in the drivetrain reciprocates; every part spins. There’s no exhaust smell; the fuel is invisible. The torque impacts your body with the violence of facing the wrong way on the train tracks when the whistle blows. Within the first degree of its first revolution, 100 percent of the motors’ combined 687 lb-ft slams the sense out of you. A rising-pitch ghost siren augers into your ears as you’re not so much.