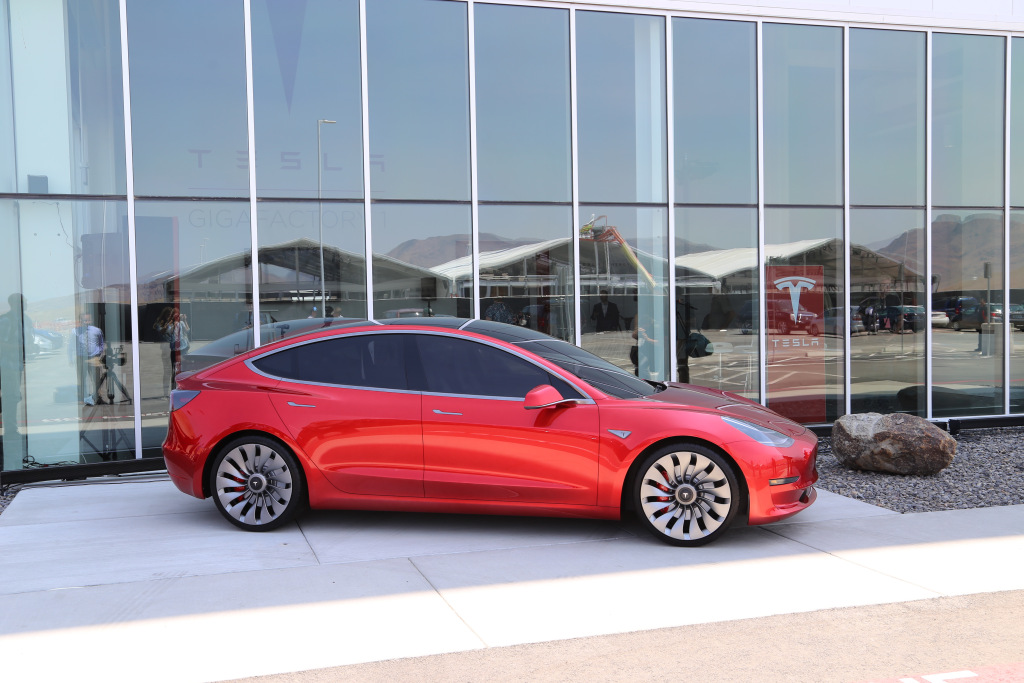 At the press conference held in the lobby of the Gigafactory on Wednesday evening, Elon Musk and JB Straubel told the press a great deal about the upcoming Model 3 and the company’s new focus on solar power.

Musk: “I believe we are on track to meet the half million by 2018. The hardest thing to predict is really the ramp. The ramp looks like an S curve and grows exponentially. Initially the ramp looks really tiny and as you eliminate bottle necks you climb the ramp and you level off. Its always difficult for us to forecast the exact shape of the S curve for the production ramp.

“It’s much easier for us to forecast when things are going to be steady state. So we’ve been pretty good about forecasting 2018, whereas 2017 is much more in the air because we’ll be working through a complex production ramp.”

Straubel: “One of the points is the schedule and ramp up plan for the Gigafactory. With the pull up of the Model 3, and the volume goal to meet a half million cars by 2018, we also have had to pull up the Gigafactory schedule to supply the cells and battery packs for the Model 3.

“What that means is for the earlier schedule for the Gigafactory, we’ve had to pull that ahead by two years. By 2018 we have to be at 35 gigawatt hours of production to support those Model 3s. You can see the evidence of that around the factory. And Panasonic has done their part to absolutely stay in sync with that as we’ve accelerated the schedule for Model 3.”

On The Size Of The Gigafactory

Musk: “What you’re seeing is only 14% of the size of the factory overall. It’s quite huge. One of the things we discovered as we got more into the Gigafactory design and optimizing what it could do, we thought we could probably achieve about three times the output that was originally planned.

“Things are on track to be able to meet the Model 3 plan next year. We’re really excited about what’s happening here.”

Solar Power And  The Utility Grids

A battle is being waged between alternative power solutions and traditional utility companies. SolarCity has recently shut down operations in Nevada, putting 500 people out of work because policies instituted by the Nevada PUC the company feels are unfavorable to rooftop solar. At the press conference Wednesday, Musk made several remarks about the solar power industry and traditional power generation. He was careful to acknowledge alternative energy can cause strains for traditional utilities and grid operators.

“But once you exceed the 20% level, then it does become more difficult for utilities to power balance the grid. So I think it makes sense for net metering to be there up through the point where it helps the cost structure of the grid. That’s the logical thing. The utilities in some cases have tried to obfuscate that its actually helpful, and have tried to lower that number of 20% to like 3%.

Musk: “I think we’ll get into grid services eventually. The goal of Tesla is to accelerate sustainable energy, so we’re going to take a step back and think about what’s most likely to achieve that goal.

Sandwiched into the discussion was a question about whether Musk has any regrets about how Tesla introduced its Autopilot system, especially after Consumer Reports issued a call for the company to disable the Autosteer function recently.

Musk: “No, I think we did the right thing. I think we improved people’s safety, not just in fatalities but also injuries. We can see how it actually reduces impact velocity. It can reduce impact from 76 miles per hour to 46 miles an hour. That’s massive.

“We polled Tesla owners, do you want autopilot disabled or not. Not one person wanted it disabled. That’s pretty telling.”