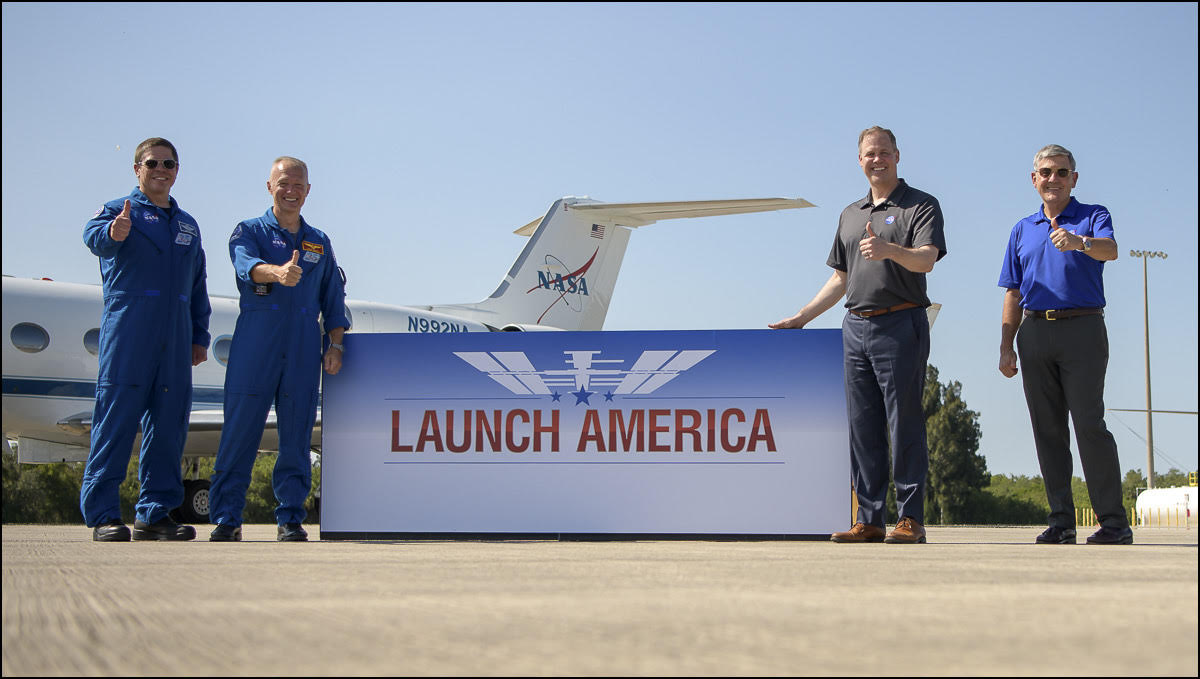 There are just seven days until human spaceflight returns to U.S. soil. In advance of the historic launch, NASA astronauts Bob Behnken and Doug Hurley boarded an agency plane bound for Kennedy Space Center today (May 20). The duo arrived at the Shuttle Landing Facility at approximately 4 p.m. EDT.

The duo will spend the next several days preparing for their mission to the International Space Station, which will last between 1-4 months.

Astronauts for the #DM2 launch, @AstroBehnken and @Astro_Doug have arrived at the Shuttle Landing Facility to begin final preparations leading up to their launch on the #SpaceX #Falcon9! pic.twitter.com/9rzb2wyDDe

Behnken and Hurley have been under a mission-related quarantine that all astronauts participate in prior to launch. In order to spend some time with the pair prior to liftoff, Behnken and Hurley’s families have also been under strict quarantine and will arrive at the launch site a few days before take-off. It also prevents the crew from bringing any transmittable diseases to the other astronauts currently living and working on the space station.

Behnken and Hurley answered a few questions upon their arrival, explaining that they were excited and very humbled to be a part of the commercial crew program. Hurley and Behnken are both veterans of the space shuttle program, with Hurley having flown on the final flight of the space shuttle Atlantis in 2011.

“I didn’t expect to fly again after STS-135,” Hurley told members of the media.

“Thanks to the SpaceX teams from across the country who have worked hard to make this happen,” he added.

Behnken chimed in: “If you gave us one thing to put on our list of dream jobs, it would have been to be onboard a new spacecraft.”

The duo explained that there would be one final dress rehearsal where the crew will practice entering the Crew Dragon spacecraft as well as try on their spacesuits one last time.

The flight is scheduled to take off on May 27, at 4:33 pm EDT (2033 UTC). Everything is on track so far, but there is still a lot of work left to do before liftoff can occur.

On Thursday, May 21, NASA and SpaceX will conduct a flight readiness review system to evaluate the Crew Dragon and deem it ready for flight. If the vehicle passes that, then on Friday, a static fire test will occur, followed by a crew dress rehearsal. On Monday, NASA will hold its final launch readiness review. If all goes as planned, Bob and Doug will board their spacecraft approximately three hours before launch.

They will spend 19 hours on orbit, testing out various systems on the Crew Dragon spacecraft. At that point, autopilot will take over, and the spacecraft will dock with the space station.

This week the head of NASA’s human exploration program abruptly resigned after being on the job for six months. He was supposed to lead the agency’s flight readiness review, but that will now be handled by the agency’s associate administrator Steve Jurczyk.

Former astronaut and current deputy associate administrator of human exploration Kenneth Bowersox will take over for the departed Doug Loverro. According to NASA, Loverro’s departure will not have an effect on the upcoming crew launch.