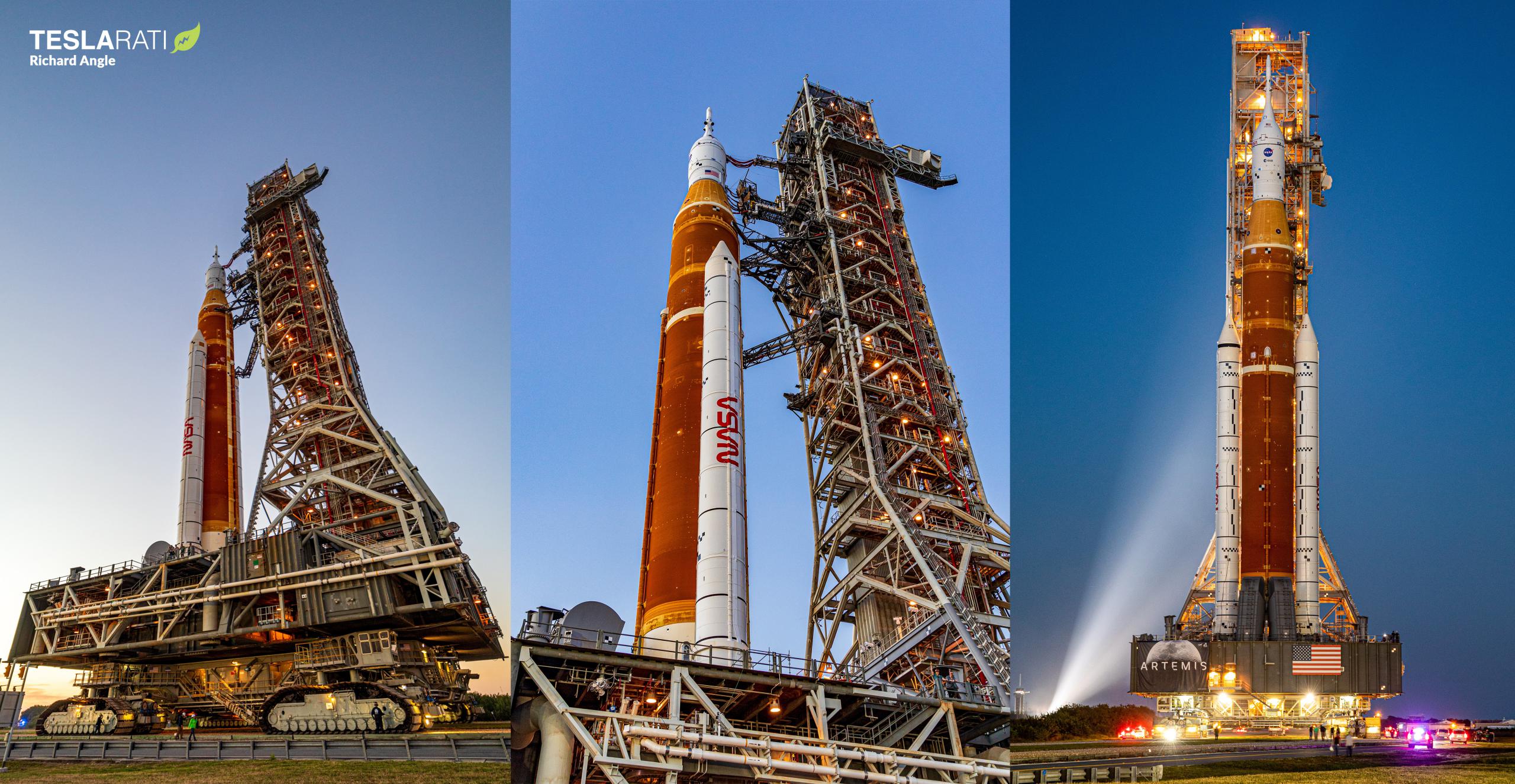 SLS has rolled out of the VAB for the first time ever. (Richard Angle)

About six hours later, the massive rocket departed the VAB for the first time ever and began a four-mile (6.4 km) journey to Pad 39B atop Crawler-Transporter 2. This is the first time a Moon rocket has rolled out of NASA’s Vehicle Assembly Building since Saturn V headed to Pad 39A for Apollo 17 in 1972.

Crawler-Transporter 2 is a building-sized vehicle responsible for carrying NASA rockets – and their even more massive ‘mobile launch platforms’ – from the assembly building to the launch pad. The 6.6-million-pound (~3000 ton) vehicle has a top speed of two miles per hour (~3.2 km/h) while unloaded and one mile per hour (~1.6 km/h) while loaded and is designed to carry a payload of up to 18 million pounds (~8100 tons). The crawler ultimately took about 11 hours to transport SLS, Orion, and MLP-1 to Launch Complex 39B (LC-39B/Pad 39B).

Once the rocket and MLP-1 are fully installed on Pad 39B and the crawler has moved a safe distance away, SLS will be put through its first series of fully integrated tests, culminating in a wet dress rehearsal (WDR) as few as two weeks from now. Once the wet-dress is complete, SLS will be rolled back to the VAB for final launch preparations, including final Orion spacecraft processing, flight software updates. the identification and the repair of any issues found or wear generated during testing.

SLS is comprised of a core stage (CS-1), upper stage (the Interim Cryogenic Propulsion Stage or ICPS), two solid rocket boosters (SRBs), an incomplete but spaceworthy Orion spacecraft, and a new mobile launch platform (MLP-1). This particular vehicle will be responsible for Artemis-1, an uncrewed test flight that will attempt to inject Orion into orbit around the Moon. While most of the spacecraft’s systems are in place, Artemis 1’s Orion will have no life support or environmental control hardware installed and also lacks a docking adapter.

NASA and its SLS/Orion contractors have subcontracted parts of the rocket and spacecraft’s development to more than 1,100 companies spread across the US, as well as every NASA center. SLS and Orion prime contractors include Boeing, Aerojet Rocketdyne, Northrup Grumman, and the United Launch Alliance. Once completed and qualified, all hardware was shipped to Kennedy Space Center, where the SLS rocket was then fully assembled inside the VAB. All Artemis 1 hardware arrived at KSC by the end of April 2021.

NASA says SLS’ launch debut is now expected to occur no earlier than (NET) May or June 2022. However, given the program’s history of delays, particularly surrounding major integrated testing, it’s likely that this stage of SLS testing will take longer than expected, so launch dates should only be treated as placeholders until the rocket has completed prelaunch testing and been inspected and recertified back inside the VAB.