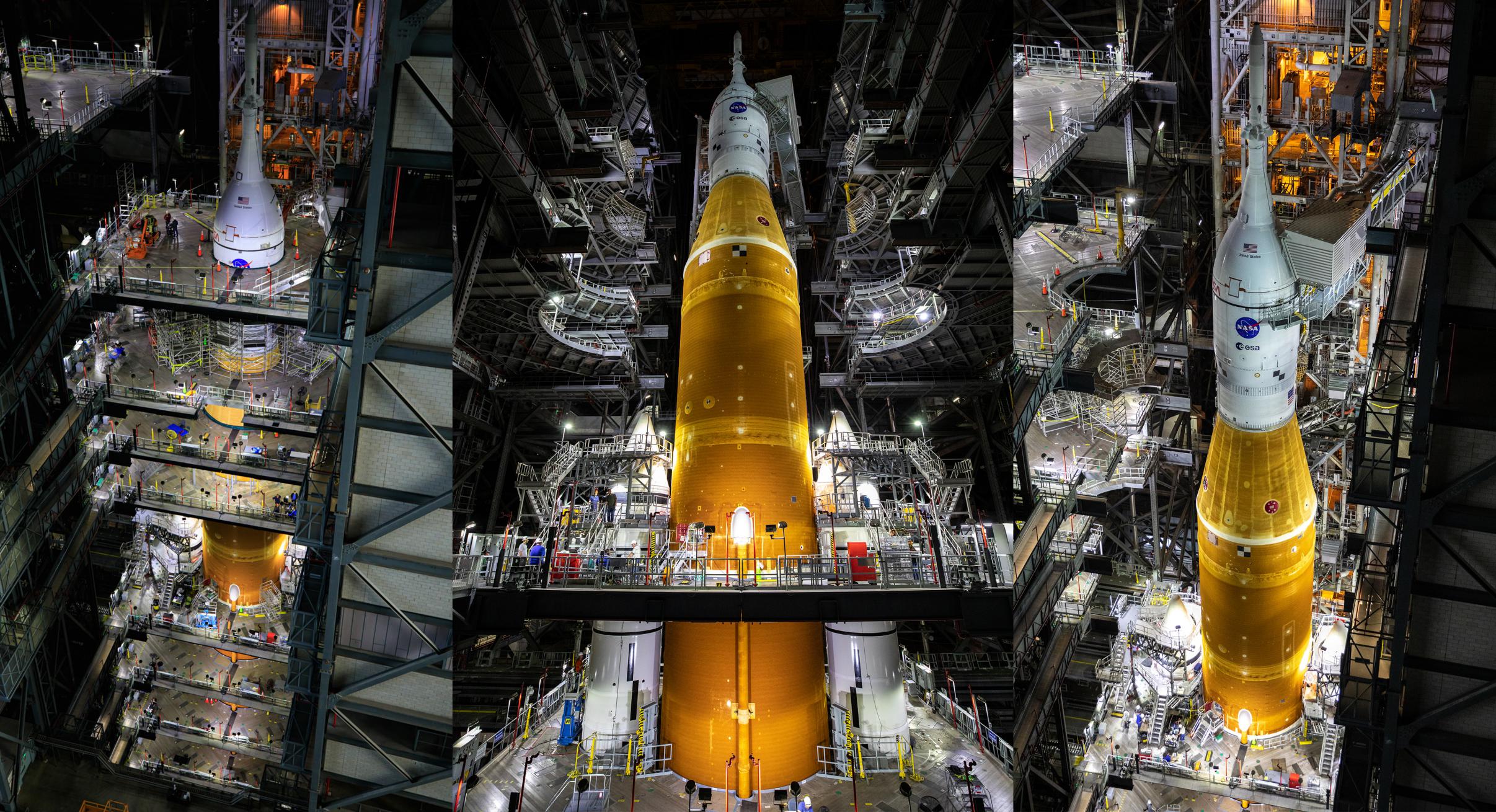 After almost a year of assembly, NASA may finally be ready to roll its SLS rocket to the launch pad for the first time - albeit not to launch. (NASA)

NASA says its first complete Space Launch System (SLS) rocket is less than a week away from its first rollout and the start of its first East Coast ‘wet dress rehearsal’.

Teams have begun retracting work platforms surrounding the fully stacked rocket, slowly revealing the launch vehicle assigned to Artemis 1 – a much anticipated and extensively delayed uncrewed test flight of the SLS rocket and Orion spacecraft. Since April 2021, SLS and Orion have been slowly but surely assembled within the Vehicle Assembly Building (VAB) at NASA’s Kennedy Space Center in Cape Canaveral, Florida.

Preparing the rocket for the launch pad has required an arduous and complex series of tests meant to ensure that the vehicle is ready for the stresses it will experience and the operations it will perform before and during launch. The rollout is expected to begin around 5 pm EST (22:00 UTC) on Thursday, March 17th and, if all goes well, it should take the giant crawler tasked with carrying the rocket and ‘mobile launch platform’ about 12 hours to carry them to Launch Complex 39B (LC-39B or Pad 39B). The first hour of the rollout will extricate the rocket and its mobile launch tower from the VAB, followed by an 11-hour journey to the pad.

NASA says SLS will spend around one month at Pad 39B, during which it will undergo expensive testing required to ensure its launch readiness. After two weeks on the pad, SLS will have its tanks filled with liquid hydrogen (LH2) and liquid oxygen (LOx) propellant and run through a simulated countdown in a process known as a wet dress rehearsal (WDR). Representatives of the Artemis-1 mission indicate “the countdown will end at about [T-minus 9 seconds], which is just moments before the rocket’s four RS-25 engines would ignite [before] an actual launch.” By allowing the countdown to run so low, test teams are able to check all interfaces (aside from the rocket’s RS-25 engines) that must be carefully coordinated during launch.

Once the wet-dress is complete, SLS will be rolled back into the VAB for final launch preparations, including the identification and repair of any issues found during wet-dress, final Orion spacecraft work, and flight software updates. After SLS’ return to the VAB, NASA expects that final work to take one month to complete. However, NASA officials admit that there is still a lot of work to be done to SLS before launch, and almost every aspect of the space agency’s work on the rocket over the last two and a half years has run into extensive delays.

An official launch date has not been chosen by NASA, as delays continue to make setting a specific date impractical. Tom Whitmeyer, NASA deputy associate administrator for exploration systems development, has indicated that a launch in April is no longer feasible. “We’re still evaluating the tail end of the May window,” he said, which runs from May 7 to 21. Future launch windows, governed by orbital mechanics and other mission constraints like ensuring that Orion is recovered in daylight, are June 6 to 16 and June 29 to July 12, with a “cutout” of July 2 to 4, when a launch would not be possible.

The Artemis-1 mission will be the first uncrewed integrated flight test of NASA’s Orion spacecraft and Space Launch System rocket. The SLS rocket is designed for missions beyond low-Earth orbit carrying crew or cargo to the Moon and beyond. At liftoff, it will weigh approximately six million pounds (~2700 tons) and produce around 8.8 million pounds (~4000 tons) of thrust.