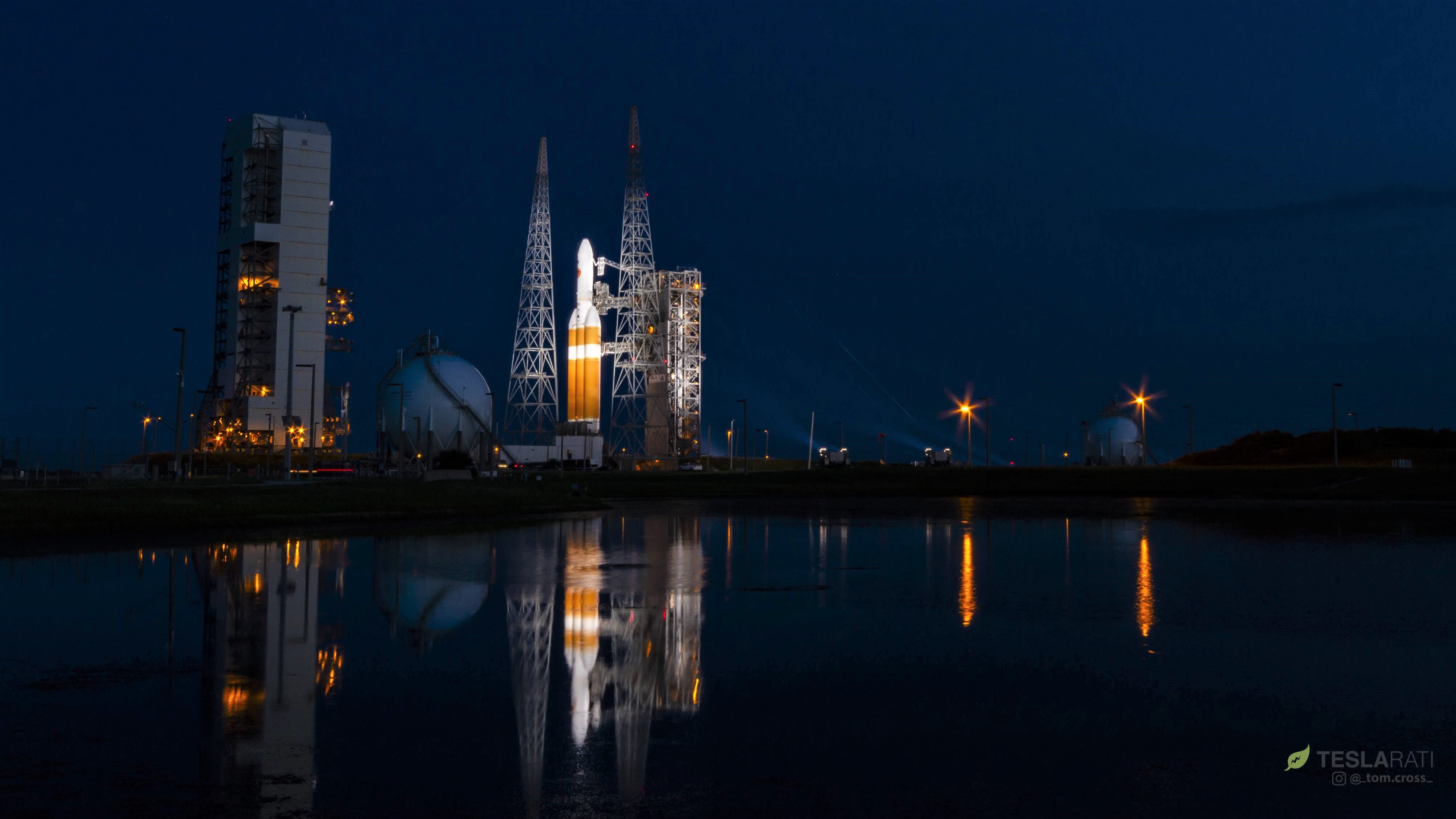 Update: Issues with rocket and ground support hardware ran down the August 11 launch window. ULA scrubbed the attempt and has recycled the launch to August 12, 3:31 am EDT/07:31 UTC. The second attempt will again be streamed by NASA TV.

Teslarati photographer Tom Cross is on the ground in Cape Canaveral, Florida ahead of what will most certainly be a spectacular launch of NASA’s sun-bound Parker Solar Probe atop SpaceX competitor ULA’s (United Launch Alliance) Delta IV Heavy, the world’s second most powerful operational rocket.

Well, we’ve just concluded the most incredible camera setup I’ve ever attended. We had incredible access up to 150ft from the rocket. 4 large locations During sunset 2 hours. I’m not even finished editing photos but these I couldn’t wait to post! 3:33am liftoff @NASA @ulalaunch pic.twitter.com/jlEwulwY7T

Second only to SpaceX’s recently-debuted Falcon Heavy rocket, the Delta IV Heavy (DIVH) is a massive beast of a launch vehicle made up of three single-engine boosters that produce more than 2.1 million pounds of thrust at liftoff. As a side-effect of the rocket’s liquid hydrogen and oxygen fuel choice, DIVH’s booster bodies are a solid 5 meters in diameter (40% wider than Falcon 9) to account for the fact that hydrogen is far less energy-dense than kerosene (Falcon 9’s fuel of choice).

The launch of NASA’s Parker Solar Probe (PSP) will be Delta Heavy’s 10th launch since it first debuted in 2004, giving a taste for how infrequently the rocket typically launches – averaging less than once a year. The target of Parker Solar Probe’s mission happens to be the Sun itself, more specifically the dispersed aura of plasma (superheated gas) – known as the solar corona – that surrounds it.

In pursuit of “touching the surface of the sun”, PSP will wind up becoming the fastest human-made object in history, reaching velocities upwards of 200 km/s (120 mi/s) at a distance from the sun of just 6 million km (3.7 million mi). At that unfathomable speed, Parker Solar Probe would travel from Los Angeles to Manhattan in 20 seconds. 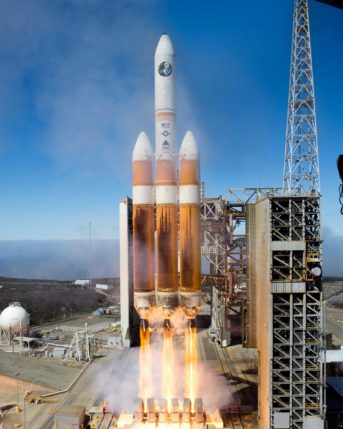 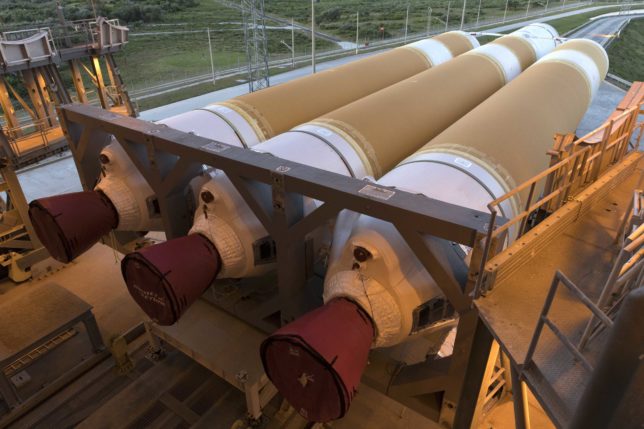 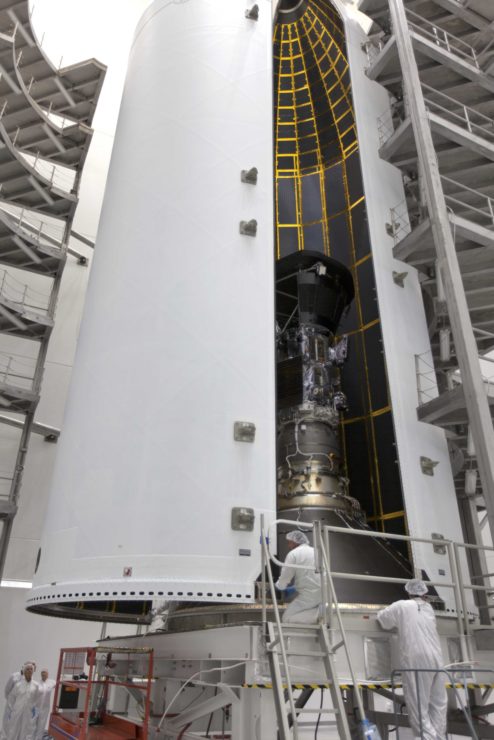 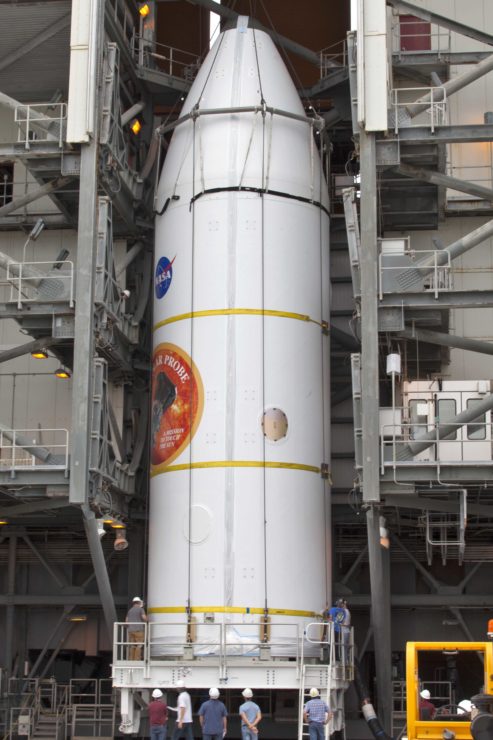 Encapsulated in its payload fairing, Parker Solar Probe is craned atop Delta IV Heavy in a process known as vertical integration. (NASA)

That close to the sun, the temperatures PSP will be subjected to are extraordinary, thanks to the fact that sunlight will be a full 500 times more powerful than the light that reaches us humans on and around Earth. To survive temperatures as high as high as 1,377℃ (2,500°F) and keep its highly-sensitive scientific instruments and spacecraft bits at a more reasonable 29.4℃ (85°F), PSP will bring along a heat shield just big enough for the craft to hide behind.

ULA’s Delta IV Heavy is currently scheduled to launch NASA’s Parker Solar Probe from Cape Canaveral at 12:33 am PDT/3:33 am EDT/07:33 UTC. Follow along in real-time with NASA TV’s live coverage of the launch and stay tuned for photos from Teslarati photographer Tom Cross’ remote cameras.