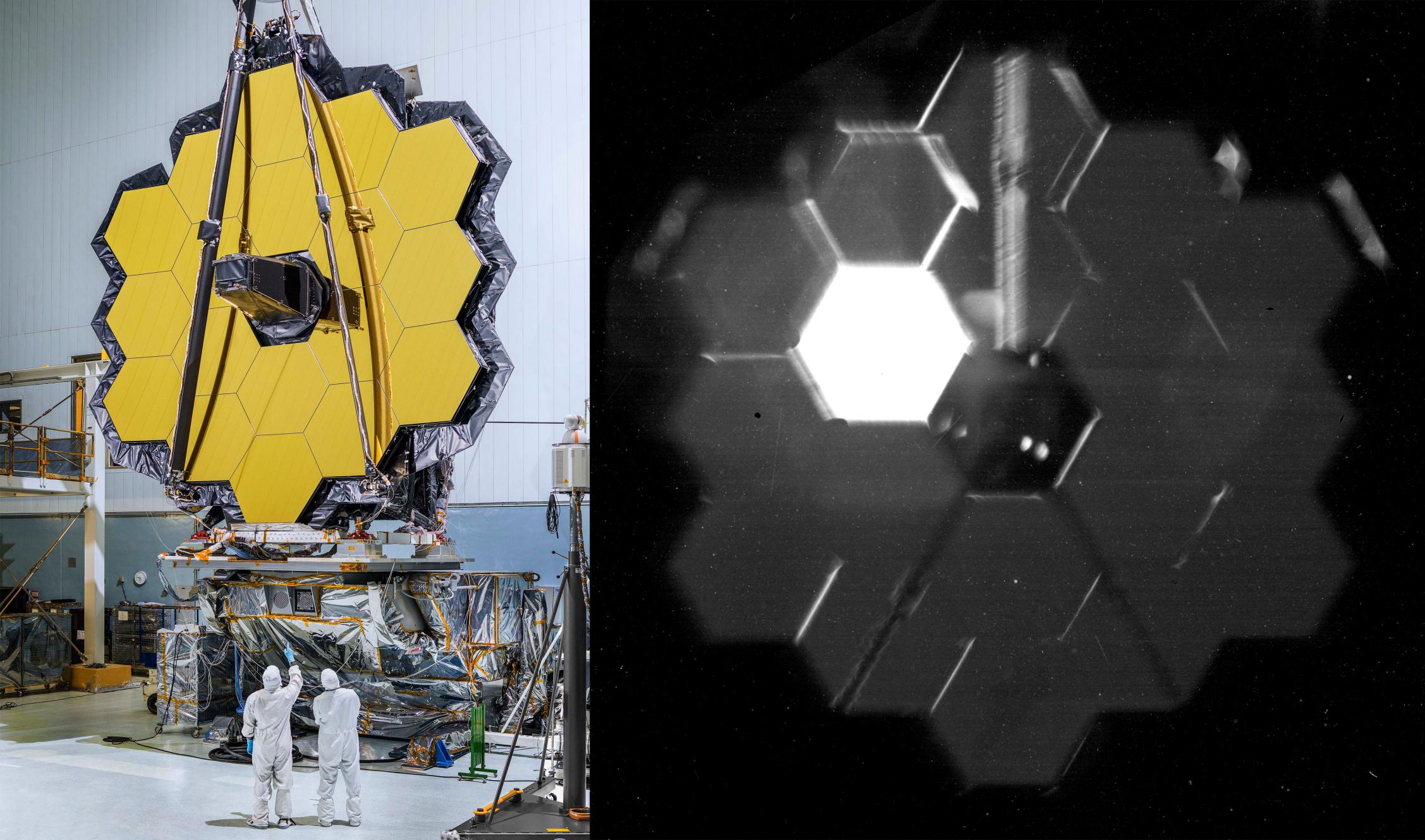 The largest telescope mirror ever launched into space: on the ground and a million miles away from Earth. (NASA)

NASA has published some of the first recognizable photos taken by the James Webb Space Telescope (JWST), the most capable space telescope ever created.

On December 25th, 2021, the James Webb Space Telescope launched into orbit from South America’s Kourou, French Guiana spaceport, catching a ride on a European Ariane 5 rocket. After a 30-day voyage from the launch pad to an operational orbit approximately 1 million miles from Earth; weeks of maneuvering, orienting, and deploying hundreds of mechanical parts, the telescope has finally unveiled its first images from space – including an unexpectedly recognizable view of its vast primary mirror.

The array of images show a nondescript star (HD 84406) in the constellation Ursa Major that was chosen to support JWST calibration mainly because of how dim it is. Each image is created from light reflecting from each of Webb’s 18 main mirror segments, which together make up the 6.5-meter-wide (21 ft) primary mirror of the telescope. In this instance, those images were reflected into a secondary mirror and then recorded by the Near Infrared Camera (NIRCAM). Eventually, if all goes well during the lengthy calibration and commissioning process, all 18 mirror segments will be aligned to the level of individual wavelengths of light (nanometer precision) and focused until all 18 photos of star HD 84406 become one. Finally, each of the telescopes many complex instruments must also be calibrated.

Image capture operations started on February 2nd. Webb was repositioned 156 times to properly capture images of HD 84406 and after 25 hours, JWST was able to locate the star within all 18 mirror segments and generated 1,560 images using NIRCam’s 10 detectors, amounting to 54 gigabytes of raw data.

“This initial search covered an area about the size of the full Moon because the segment dots could potentially have been that spread out on the sky,” said Marshall Perrin, deputy telescope scientist for Webb and an astronomer at the Space Telescope Science Institute. “Taking so much data right on the first day required all of Webb’s science operations and data processing systems here on Earth working smoothly with the observatory in space right from the start. And we found light from all 18 segments very near the center early in that search! This is a great starting point for mirror alignment.”

Additionally, NASA shared an unexpected, ghostly “selfie” that the observatory took of its primary mirror array with a crucial instrument known as NIRCAM (short for Near-Infrared Camera).

“Moving forward, Webb’s images will only become clearer, more detail-laden, and more intricate as its other three instruments arrive at their intended cryogenic operating temperatures and begin capturing data. The first scientific images are expected to be delivered to the world in the summer of 2022. Though this is a big moment, confirming that Webb is a functional telescope, there is much ahead to be done in the coming months to prepare the observatory for full scientific operations using all four of its instruments.” (NASA)

Because Webb prioritizes weak infrared wavelengths of light to detect extraordinarily distant objects in our universe, the entire business side of the telescope – included all mirrors, sensors, and most instruments – must be kept incredibly cold – closer to absolute zero than any temperature humans are familiar with. The telescope uses a tennis-court-sized multilayer sun shield to protect itself from the heat of the sun, which it must be constantly exposed to in order to power itself with solar arrays. The outermost layer will always face the Sun and reflect most of its heat, operating at a scorching 230 degrees Fahrenheit. But each layer of the shield will become cooler and cooler so that JWST’s instruments stay cryogenic, operating around -370 degrees Fahrenheit.

The James Webb Space Telescope is the world’s largest, most powerful, and most complex space-based observatory ever built. If commissioning ends as successfully as launch, deployment, and early alignment, Webb will one day help solve mysteries of our own solar system, look beyond to distant worlds around other stars, and probe the mysterious structures and origins of our universe. Webb is an international program led (and mostly funded) by NASA alongside partners ESA (European Space Agency) and CSA (Canadian Space Agency).