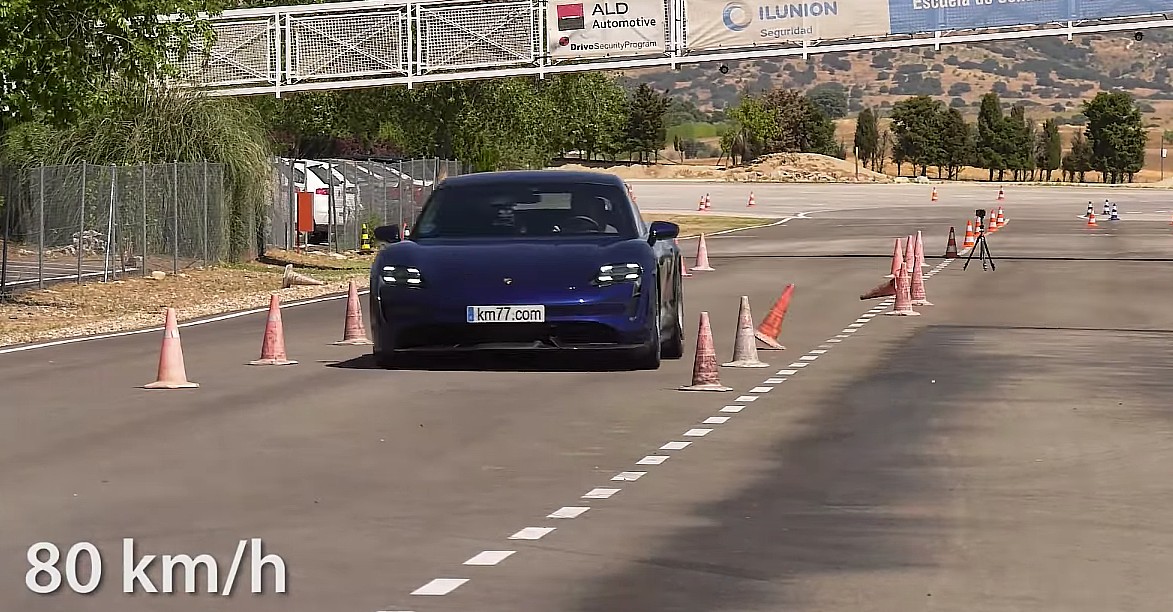 The Porsche Taycan is arguably one of the best-handling vehicles today, electric or otherwise. The vehicle is the German automaker’s flagship all-electric car, embodying the experience gathered and refined by Porsche through its decades of experience in vehicle production and design. The Taycan is a stellar vehicle, the Taycan Turbo S even more so. But if the car’s Moose Test results are any indication, it appears that the Taycan doesn’t quite match up to the record set by the Tesla Model 3 last year.

The Moose Test simulates what happens to a vehicle when it swerves sharply to avoid an unexpected obstacle in the middle of the road. The test is performed on a dry surface with traffic cones set up in an S-shape to simulate an obstacle (like a moose). To pass the test, vehicles must be able to quickly swerve and avoid the obstacle without hitting any of the cones on the road. Needless to say, only the best-handling cars on the market are able to ace the Moose Test.

For all intents and purposes, the Taycan is a vehicle that handles very well, especially for its weight. Expectations were high that the Taycan would ace the Moose Test, especially since the vehicle is from an automaker with a reputation for making the best-handling high-performance cars in the market. For its test, km77.com opted to utilize the top-tier variant of the Taycan, the Turbo S, to see just how well the best Porsche all-electric car can handle the test.

A look at the video of the Porsche Taycan Turbo S’ Moose Test results show that the vehicle performed pretty well for a car its weight and size. It took numerous failed attempts and two different test drivers, but the Taycan Turbo S was able to pass the Moose Test until the top speed of 78km/h (48mph) with the vehicle’s Sport Plus Mode engaged. That’s a pretty fair result, but it does fall 5 km/h short compared to the results of a far more humble opponent: the Tesla Model 3.

Last year, the auto publication took the Model 3 through the Moose Test. The Model 3 performed so well that the all-electric car actually set a new record for vehicles that the publication has tested, acing the test until a record entrance speed record of 83 km/h (51.5 mph). The km77.com team’s test drivers noted that part of its stellar results were due to the Model 3’s regenerative braking system, which allowed for easy control during the test’s swerving maneuvers. Tesla’s floor-mounted battery pack also contributed to the Model 3’s record scores.

That being said, it should be noted that the Taycan is still a car that handles very well. But considering that the Model 3 Performance, the most expensive variant of Tesla’s reasonably-priced sedan, is only about a third of the price of the Taycan Turbo S, it becomes very difficult to argue against the value-for-money presented by the Model 3.

Check out the Porsche Taycan Turbo S’ Moose Test results in the video below.