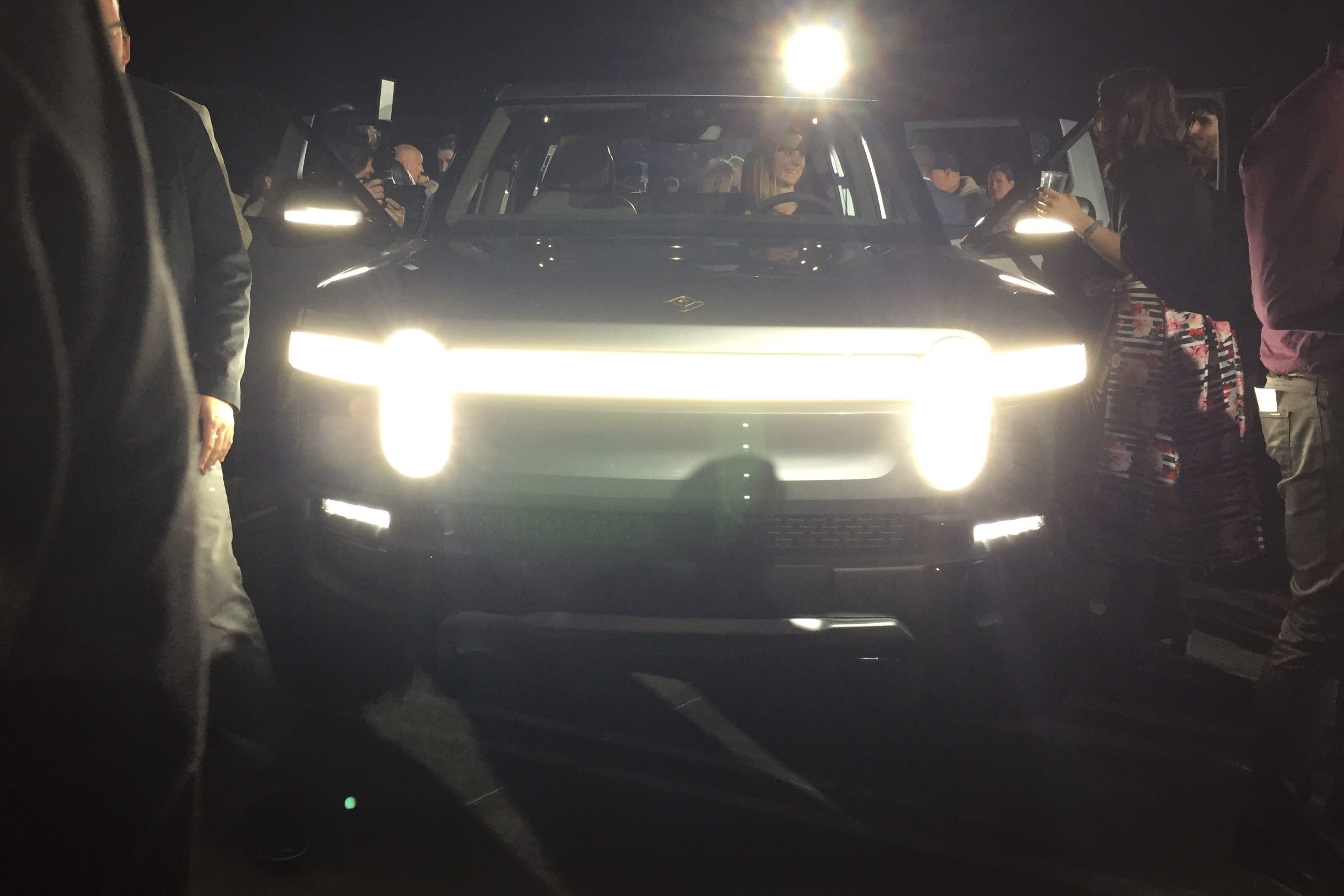 On the grounds of the historic Griffith Observatory in Los Angeles on Monday night, Rivian, a US-based electric vehicle startup, unveiled its first vehicle to a small, quaint crowd. Food was served, and calming music befitting a Four Seasons Hotel serenaded members of the press and the event’s guests, which included social media influencers and even a number of celebrities from Hollywood. Amidst the chill vibe, though, a sense of excitement permeated the air, thanks to the centerpiece of the night’s event — a futuristic, rugged, vehicle that has the potential to disrupt the US’ highly lucrative pickup truck market.

The Rivian R1T, with its large off-road wheels, imposing stance, and adventure-themed design flourishes almost stood as a stark contrast to the unveiling’s quaint atmosphere. Quite unlike Tesla, whose unveiling events feature large numbers of people and a modern, high-energy setting, Rivian’s unveiling event for its R1T pickup truck was composed and almost restrained. The enthusiasm in the air, though, was palpable.

The R1T could be described as a luxury adventure vehicle. The pickup truck is designed from the ground up to be at home both on the pavement and off the beaten path, but the vehicle maintains an air of sophistication nonetheless. While Rivian did not allow test drives during the event, the truck on display was very well put together. It was evident that a lot of thought went into the vehicle’s interior design, from its luxurious seats, its all digital instrument panel, and its unique floormats which were made from a lightweight, thin material that almost seemed like carbon fiber. 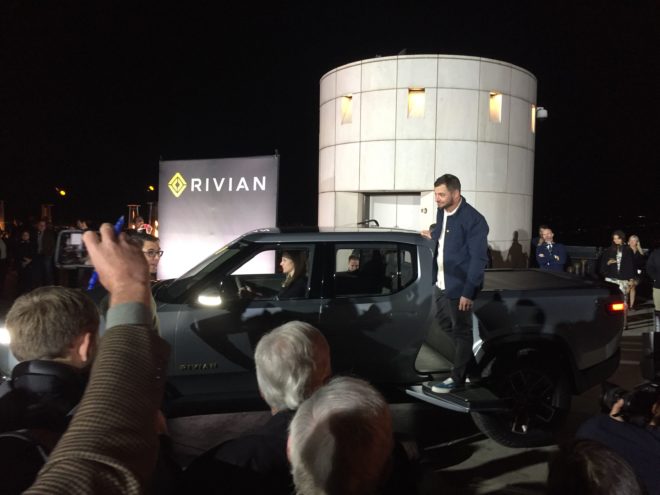 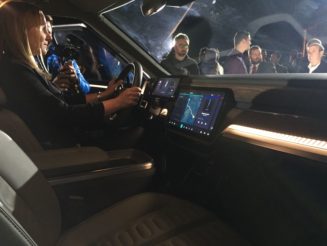 The Rivian R1T’s interior is plush with technology. [Credit: Teslarati] 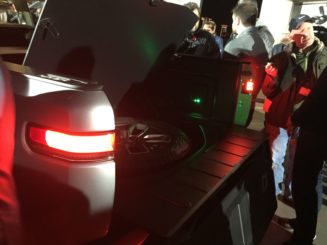 The Rivian R1T features a functional bed with a number of clever features. [Credit: Teslarati] 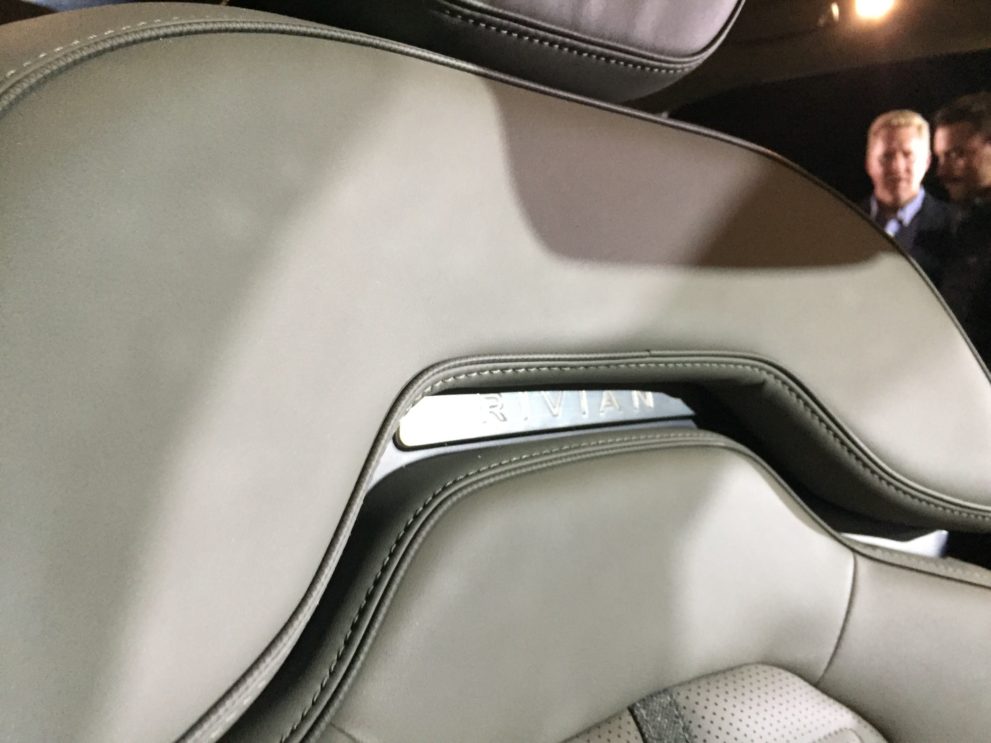 The luxury aspect of the Rivian R1T is reflected in the vehicle’s seats, which are made of premium materials. [Credit: Teslarati]

Speaking before an audience comprised mainly of Rivian employees, select media and even some A-list celebs, CEO RJ Scaringe presented the R1T’s key features and capabilities. Rivian confirmed that they are using 2170 battery cells for the R1T pickup truck and the R1S SUV, which is set to be unveiled on Tuesday. The company noted that it would not be producing its own batteries at this stage of its operations, though their long-term strategy also includes the possibility of establishing a dedicated battery manufacturing facility like Tesla’s Gigafactory 1. Rivian aims to be a battery manufacturer like Tesla eventually, and it aims to license and sell its cells to other manufacturers in the future.

There’s no question that the vehicle’s target demographic are buyers who love luxury and the outdoors. As such, we were impressed by some of the pickup truck’s features that are aimed at making the ownership experience effortless. Among these were its automatic liftgate, and a thin, black lining that automatically protects cargo on the bed with the press of a button. We also found some of the R1T’s quirks — such as headlights that double as a green progress bar when the vehicle is charging — clever and fun. Finally, we liked the vehicle’s storage options, from its “gear tunnel” to its 11.7 cubic foot (330 liter) frunk, which is larger than those found in other premium electric vehicles like the Tesla Model S and Model X.

Rivian noted that it intends to develop self-driving capabilities for the R1T. As such, the truck is equipped with the hardware necessary to make this a reality. These include a suite of cameras, ultrasonic sensors, radar, high-precision GPS technologies, and even a LiDAR. In the future, the company notes that the vehicle should be able to meet its driver at the end of a hiking trail or river run. The company did not provide details as to how it intends to accomplish this, though considering its focus on the outdoors, there is a good possibility that Rivian could be mapping popular trails across the country. 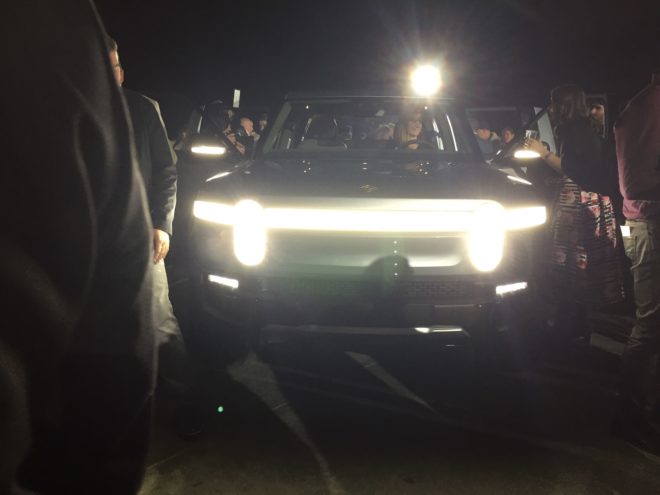 The Rivian R1T has a distinct front fascia. [Credit: Teslarati] 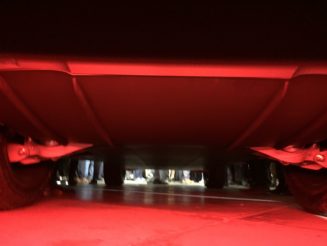 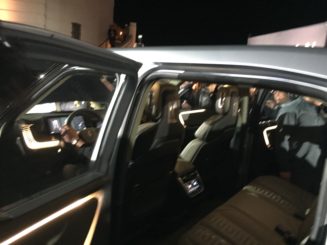 The Rivian R1T all-electric pickup truck has a seating capacity of 5. [Credit: Teslarati] 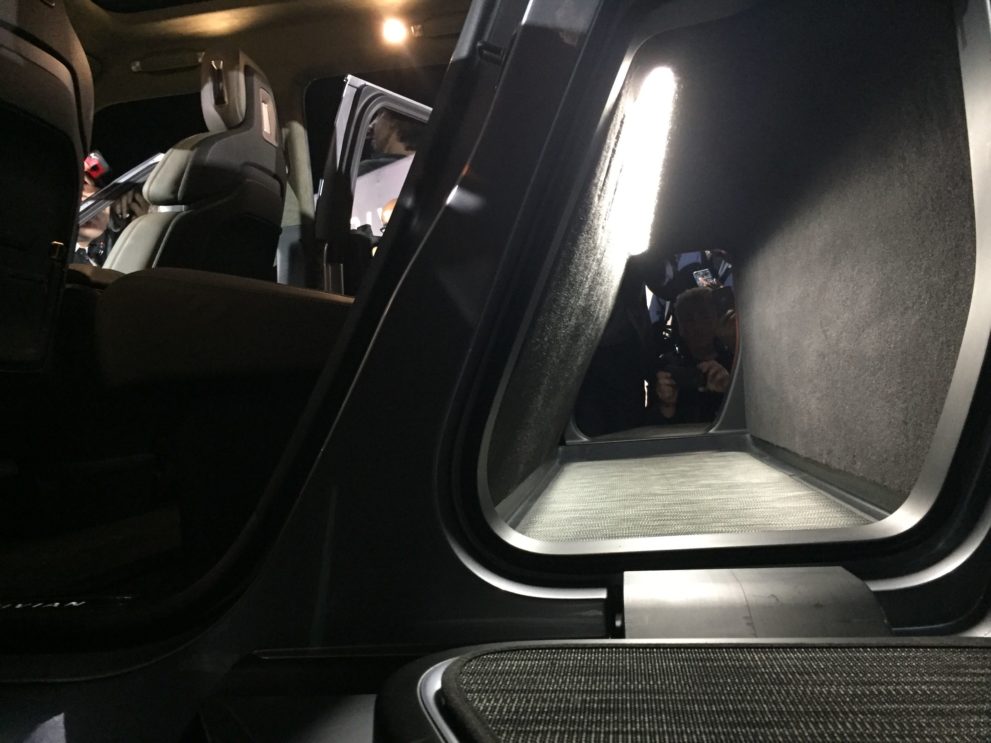 The Rivian R1T’s “gear tunnel,” which is specifically designed to store items like fishing roads and golf clubs. [Credit: Teslarati]

After operating in stealth for the most part of the past decade, Rivian has decided to come out with a bang, renting out one of the most historic landmarks in LA to unveil a vehicle that could very well be equally historic if produced and ramped successfully. The R1T starts at $69,000 for its base trim, which is equipped with four electric motors and a 230+ mile range from its 105 kWh battery. The all-electric truck is still pricier than mainstays of the US’ pickup truck market such as the Ford F-150, which starts at a more affordable $29,650. That said, Rivian CEO RJ Scaringe made it clear that the company is going for a very specific niche with its first two vehicles — those that love the outdoors, and those that love luxury. For this niche of buyers, the Rivian R1T might just be the perfect vehicle.

Production of the Rivian R1T is expected to begin in 2020 in the company’s factory in Normal, Il, which it acquired from Mitsubishi in January 2017 for $16 million. The company plans to manufacture the pickup truck’s higher-end variants first, followed by the R1T’s $69,000 version within 12 months from the start of production. Rivian has also started accepting pre-orders for the R1T, with interested buyers being required to place a refundable deposit of $1,000 for the vehicle.

With assistance from Christian Prenzler.