Speaking in a late-December 2018 interview with Popular Mechanics’ editor-in-chief, SpaceX CEO Elon Musk shared considerable insight into the thought processes that ultimately led him to – in his own words – “convince” his team that the company’s BFR rocket (now Starship and Super Heavy) should pivot from an advanced composite structure to a relatively common form of stainless steel.

Aside from steel’s relative ease of manipulation and affordability, Musk delved into the technical solution he arrived at for an advanced, ultra-reusable heat shield for Starship – build it out of steel and use water (or liquid methane) to wick reentry heat away.

When going to ~1750 Kelvin, specific heat is more important than latent heat of vaporization, which is why cryogenic fuel is a slightly better choice than water

Although there has been some successful experimental research done on “transpirational” heat shields (relying on the heat capacity of vaporizing liquids or gases to soak up thermal energy during orbital rocket reentries), Musk is by no means wrong when he says that a stainless steel sandwich-hulled spaceship regeneratively cooled by microscopic holes and liquid water or propellant “has never been proposed before”. While the basic concept probably arose somewhere over the last 50-100 years, it does not appear that any serious theoretical or experimental research has been conducted to explore transpiration-cooled metallic heat shields, where metallic thermal protection systems (TPS) are already fairly exotic and unproven in the realm of modern aerospace.

While Musk’s solution could dramatically simplify what is needed for Starship’s high-performance heat shield, a stainless steel sandwich on half of Starship offers another huge benefit: the spacecraft can still gain many of the mass ratio benefits of stainless steel balloon tanks (metal tanks so thin that they collapse without positive pressure) while retaining structural rigidity even when depressurized. At the end of the day, Musk very well might be correct when he states that a stainless steel Starship can ultimately be more mass-efficient (“lighter”) than a Starship built out of advanced carbon composites, a characteristic he rightly describes as “counterintuitive”. 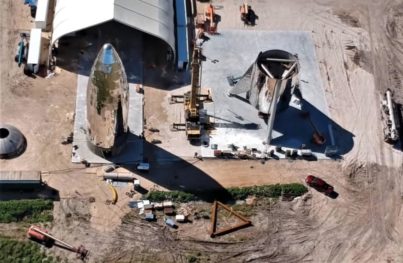 Starhopper and SpaceX’s spartan assembly facilities are pictured here, showing the inside of the aft section and a completed tank dome. (Austin Barnard)

Starship has been shown with actuating fins and canard wings since SpaceX’s September 2018 update. (SpaceX)

What does Science™ have to say?

Based on research done in the 2010s by German space agency (DLR), a porous thermal protection material called Procelit 170 (P170) – 91% aluminum oxide and 9% silicon oxide – was cooled from a peak heat of ~1750 C (3200 F) to ~25 C (75 F) during wind tunnel testing, demonstrating that an average of 0.065 kg (~2.3 oz) of water per second would be needed to cool a square meter of P170 to the same degree, assuming a heating rate of around 200 kW/m^2. Given that 300-series stainless steels have a comparatively huge capacity for radiating heat at high temperatures, will be dramatically thinner than Procelit in any given Starship use-case, and will not need to be cooled all the way to 25C/75F during hot operations, the DLR-derived number is barely relevant without another round of wind tunnel tests focused on metallic thermal protection systems. Still, it allows for the creation of a sort of worst-case scenario for BFS/Starship’s water-cooled shield.

Assuming that the windward side of Starship’s regeneratively cooled heat shield has roughly the same surface area as half of a cylinder, 800 m^2 (8600 ft^2) will have to be actively cooled with water, translating to a water consumption rate of approximately 52 kg/s (115 lb/s) if the entire surface is being subjected to temperatures around ~1750 C. That is, of course, a grossly inaccurate generalization, as aerodynamic surfaces dramatically shape, dissipate, and concentrate airflows (and thus heat from friction) in complex and highly specific ways. Much like NASA’s Space Shuttle or DLR’s theoretical SpaceLiner, the reality of reentry heating is that that heat typically ends up being focused at leading edges and control surfaces, which thus require uniquely capable versions of thermal protection (TPS). Shuttle used fragile reinforced carbon-carbon tiles at those hotspots, while DLR was exploring water cooling as a viable and safer alternative for SpaceLiner. 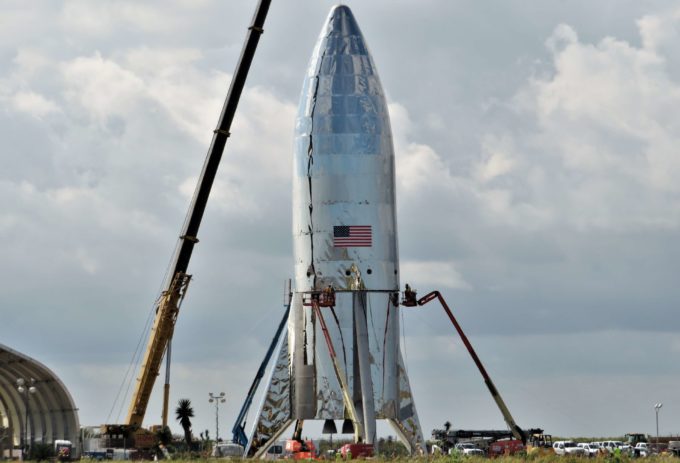 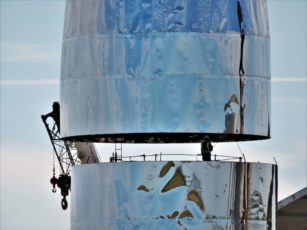 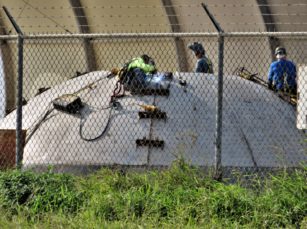 SpaceX’s Starhopper seen in a January render and a January photo. (SpaceX/Elon Musk) 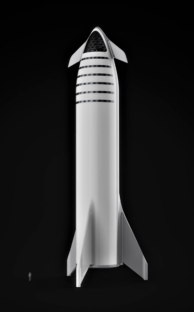 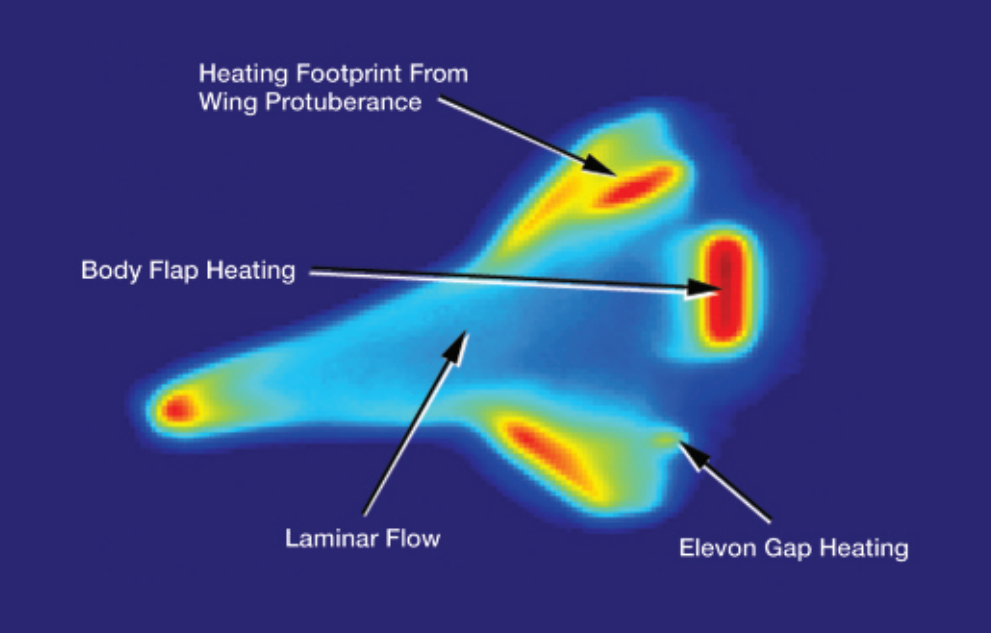 A NASA team—via a US Navy aircraft—captured high-resolution, calibrated infrared imagery of Space Shuttle Discovery’s lower surface in addition to discrete instrumentation on the wing, downstream, and on the Boundary Layer Transition Flight Experiment protuberance. In the image, the red regions represent higher surface temperatures. (NASA)

Aside from heat flux, it’s also unclear when or how long the cooling system will need to be supplied with water during potential Starship reentries. At worst, the spacecraft would need to supply a constant 50+ kg/s throughout a 5+ minute (600+ second) regime of high-velocity, high-drag reentry conditions. Assuming that Starship will need to rely heavily on aerobraking to maintain efficient interplanetary operations, it might have to perform 2+ active-cooling cycles per reentry, potentially requiring a minimum of 15 tons of water per reentry. Given that SpaceX intends (at least as of September 2018) for Starship to be able to land more than 100 tons on the surface of Mars, 15t of water would cut drastically into payload margins and is thus likely an unfeasibly large mass reserve or any given interplanetary mission.

“You just need, essentially, [a stainless-steel sandwich]. You flow either fuel or water in between the sandwich layer, and then you have [very tiny] perforations on the outside and you essentially bleed water [or fuel] through them … to cool the windward side of the rocket.” – SpaceX CEO Elon Musk (Popular Mechanics, December 2018)

The assumptions needed for the above calculations do mean that 30T is an absolute worst-case scenario for a regeneratively-cooled Starship reentry, given that SpaceX may only have to vigorously cool a small fraction of its windward surface and will likely be able to cut more than half of the water needed by allowing Starship’s steel skin to heat quite a lot while still staying well below its melting point (likely around 800C/1500F or higher). This also fails to account for the fact that a regeneratively-cooled stainless steel heat shield would effectively let SpaceX do away with what would otherwise be a massive and heavy ablative heat shield and mounting mechanism. Perhaps the benefits of stainless steel might ultimately mean that carrying around 10-30T of coolant is actually performance-neutral or a minimal burden when all costs and benefits are properly accounted for.

Probability at 60% & rising rapidly due to new architecture

Musk clearly believes with almost zero doubt that a stainless steel Starship and booster (Super Heavy) is the way forward for the company’s BFR program, and he has now twice indicated that the switch away from advanced carbon composites will actually “accelerate” the rocket’s development schedule. For now, all we can do is watch as the first Starship prototype – meant to perform short hop tests ASAP – gradually comes into being in South Texas.