While Tesla’s Solar Roof tiles are already being installed on the homes of first customers in the United States, the shingles themselves are still in initial production. Unveiled back in October 2016, the Solar Roof tiles are expected hit larger production volumes this year. As the company heads into yet another ramp of a potentially disruptive product, though, Tesla appears to be working on some improvements on the tiles’ design as well.

As noted in a recently published patent application, Tesla is developing a system that would allow the company to improve the aesthetics of the solar shingles even further. In the patent application’s description, Tesla noted that integrated photovoltaic (BIPV) roofing systems such as the Solar Roof tiles are becoming more popular in the residential solar market, thanks to their benefits in both function and design. That said, while BIPV systems present an excellent solution for design-conscious customers, the system itself faces some challenges — the most notable of which is visual uniformity.

Tesla notes that in prior art BIPV roofing systems, the active solar portions of a roofing module end up being visibly different in appearance compared to inactive parts of the roof. The company notes that this contrast in appearance can get so pronounced that it becomes easy to spot which tiles are active and which are inactive from road level. Tesla notes that even in the design of the shingles themselves, it is quite easy to determine which parts of the tiles are active and which ones are not. 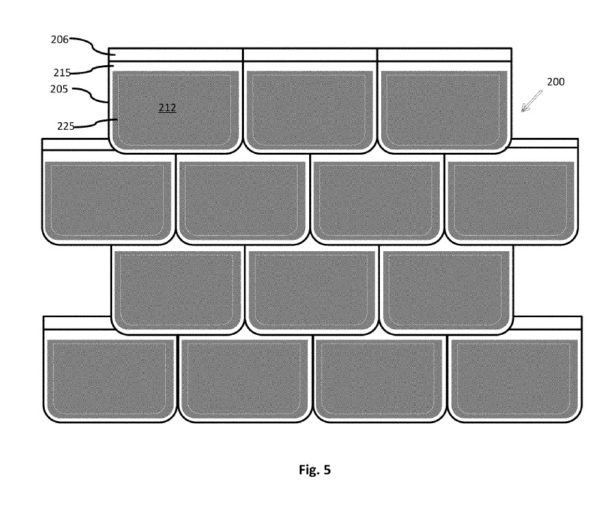 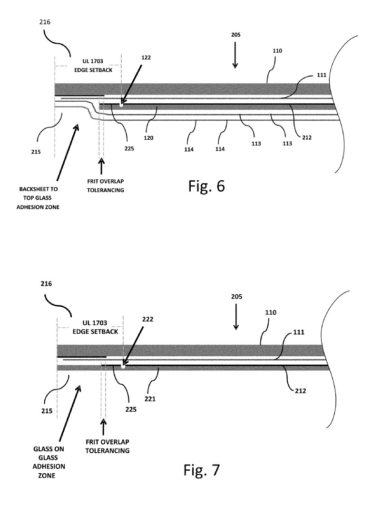 The design of Tesla’s solar shingles outlined in its recent patent application. (Photo: US Patent Office)

Tesla explains this design issue for BIPV roofing systems more extensively in the section below.

“In either tile 105 of FIG. 2 or tile 106 of FIG. 3, the lack of active thin-film material within the edge setback results in a relatively large, e.g. ˜16 mm, visible border around the outside of active area 112 that is noticeable not only when viewed up close, but even at street level distances from a roof surface. This result can be seen in the extended partial array 100 of FIG. 4. The relatively large percentage of tile surface area of the edge setback that is devoid of thin-film material creates a sharply contrasting two-color/two-tone pattern between the area surrounding the active area of thin-film photovoltaic material and the active area of thin-film photovoltaic material. In embodiments, techniques are used to provide aesthetic uniformity such as depositing colored material on the underside of top glass 110 prior to lamination to conceal active area 112 beneath. This approach, however, may result in a reduction in energy collection because these extra materials may block photons from reaching active area 112.”

Tesla’s solution for this aesthetic challenge — which uses an inactive area of thin-film photovoltaic material that surrounds a solar shingles’ active area — is simple and clever. Tesla describes its design in the section below.

“As shown, the tiles 205 include a substantially rectangular active 212 surrounded by a substantially rectangular board of an inactive area 225. In embodiments, the inactive area may completely surround the active area or may only be present on one, two or three sides of the active area. As shown in FIG. 5, the tiles 205 create a more uniform look and, when viewed at distances, such as in shown in FIG. 8, adhesion area 215 blends into the natural seams between adjacent tiles or between active areas 212 of adjacent tile sections. The visible material difference has been attenuated by the use of non-active thin-film material within a portion of the setback region allowing for a smaller adhesion zone.”

Tesla’s Solar Roof tiles are being produced at Gigafactory 2 in Buffalo, NY. Over the years, the facility has largely evaded attention, particularly as Tesla’s energy business was mostly overshadowed by the company’s ramp for the Model 3. Last year, though, Tesla opened the doors of Gigafactory 2 to the media, providing a glimpse of what is in store for the company’s residential solar business. While Tesla did not provide specifics on the facility’s current output, the electric car and energy company did state that Gigafactory 2 is operating 24/7, and that the long waiting list for the Solar Roof tiles would likely keep the entire facility busy for years.