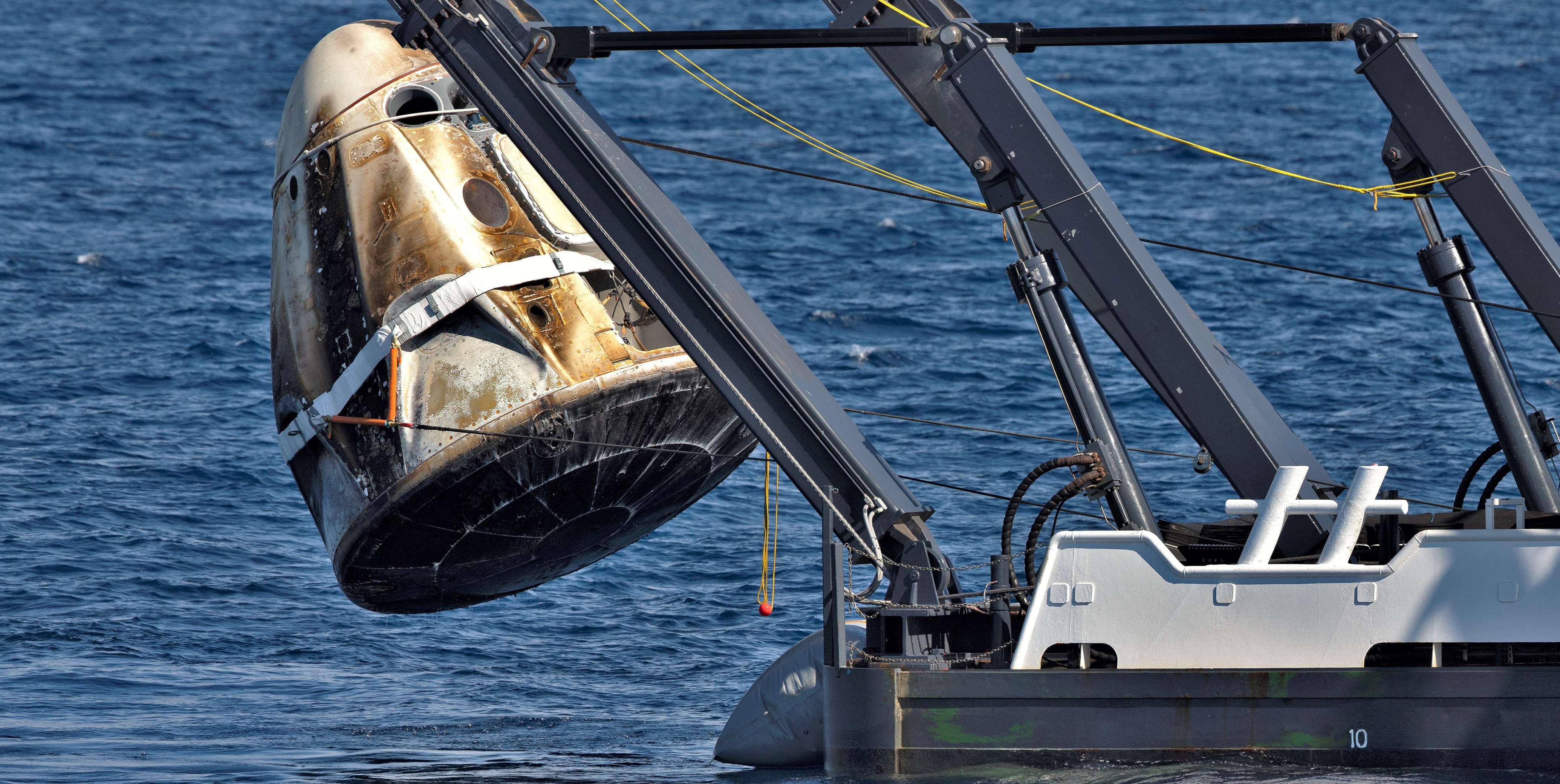 Aside from offering a number of spectacularly detailed views of Crew Dragon after its inaugural orbital reentry, NASA’s photos also provide an exceptionally rare glimpse of the spacecraft’s PICA-X v3 heat shield, revealing a tiled layout that is quite a bit different from Cargo Dragon’s own shield. A step further, CEO Elon Musk offered updates on March 17th about progress being made towards a new, metallic heat shield technology meant to make ablative shields like those on Dragon outdated, serving as a striking bit of contrast to SpaceX’s newest spacecraft, potentially just a dozen or two months away from already becoming anachronistic.

Generally speaking, the basic appearance of Crew Dragon – compared alongside Cargo Dragon, ‘Dragon 1’ – after its first orbital reentry immediately suggests that one or several things about the new capsule and its reentry experience are quite a bit different from the Dragon reentries now familiar. Relative to Cargo Dragon, Crew Dragon appears to either have significantly different thermal protection along its leeward (downwind) section or experienced significantly a different thermal profile over the course of the handful of minutes spent in the period of peak heating.

For the most part, both Dragon variants actually appear to be in similar condition, with most of the variance between capsules likely explained by their distinct aeroshells, particularly the four sloped protuberances enclosing Crew Dragon’s SuperDraco thruster pods. As a result of those pods, the hypersonic airstream and plasma tail of Crew Dragon likely ends up being quite a bit less stable, causing the somewhat haphazard patterns and streaks relative to Cargo Dragon’s more delineated leeward and windward characteristics. In fact, SpaceX CEO Elon Musk noted prior to launch that his only real concern or uncertainty centered around those new aerodynamic characteristics and the subsequent slight risk of instability during reentry.

Aside from Crew Dragon’s thruster pods and moderately different toast pattern, the next-generation spacecraft also features an intact and still-installed nosecone, a significant departure from Cargo Dragon’s own shroud, detached and permanently expended prior to reaching orbit. In the likely event that Crew Dragon’s reusable nosecone and associated waterproofing worked as intended, the myriad hardware situated beneath it – ranging from LIDAR and Draco thrusters to its relatively intricate international docking adapter (IDA) – should have been protected from both the violence of reentry and exposure to saltwater upon splashdown.

Meanwhile, the patterns on the more windward half of Crew Dragon indicate that Musk’s mild but open concerns with potential instability during reentry were predominately unwarranted, displaying scorch marks that suggest the spacecraft maintained its orientation quite successfully over six or so minutes of peak heating and buffeting. Much like almost every other aspect of Crew Dragon’s inaugural trip to orbit and back, the spacecraft performed its duties to a level of perfection so surreal that the SpaceX employees operating the craft – i.e. “on-console” – at points felt like it was too good to be true, searching for and anxiously awaiting anomalies that would have been par for the course of any spacecraft’s launch debut, let alone a system as complex as this one.

Despite their reasonable expectations of at least some sort of moderate to anomaly during flight, the monolithic narrative thus far offered by both SpaceX and NASA continues to indicate that Crew Dragon performed almost exactly as it was designed and built to. NASA deputy Commercial Crew Program manager Steve Stich went so far as to state that “the vehicle really did better than [NASA] expected”, a touch underhanded but still high praise coming from a senior NASA Johnson Space Center manager.