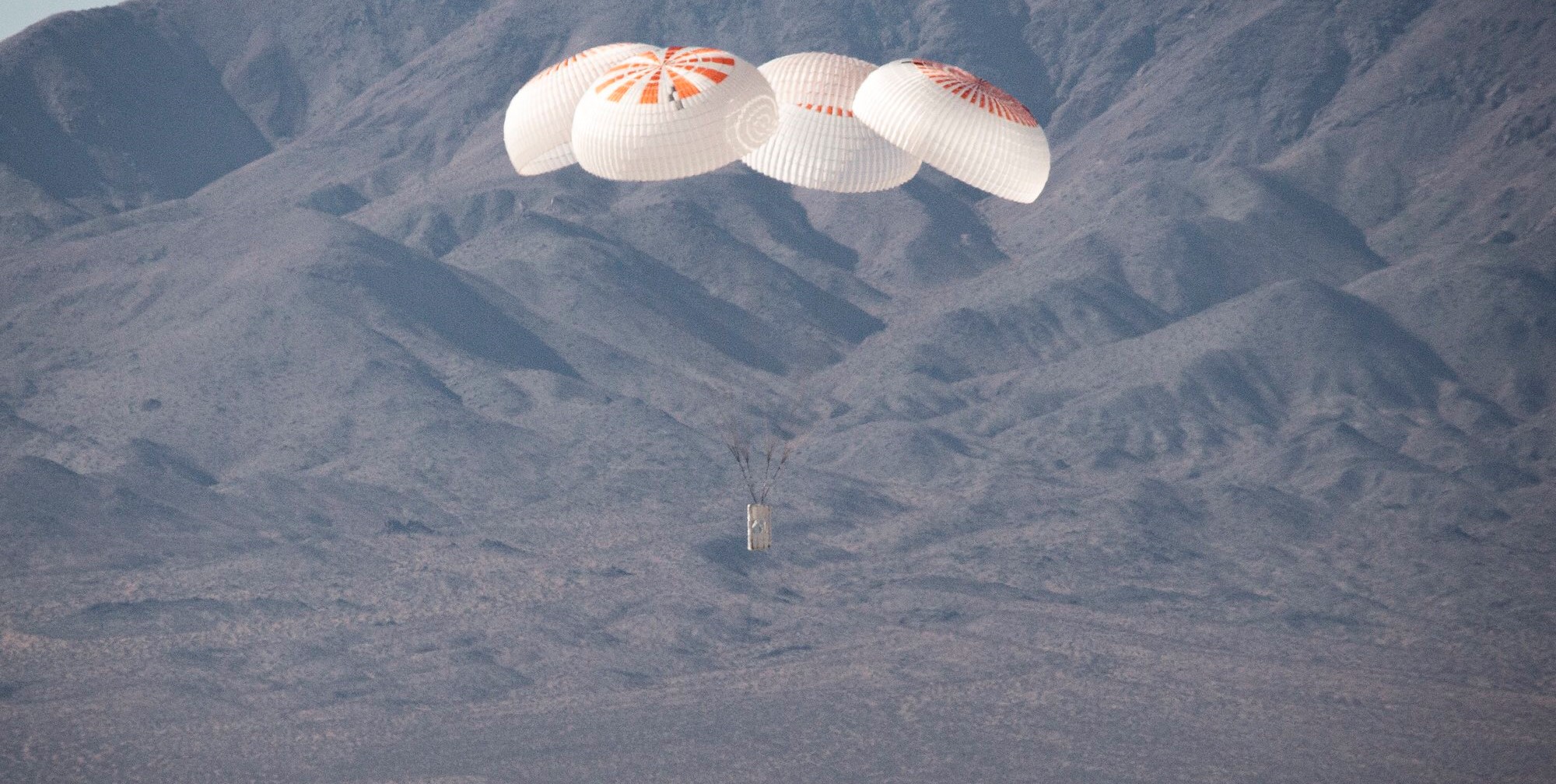 A quartet of upgraded parachutes safely land a Crew Dragon mass simulator, said by SpaceX to be their seventh consecutively successful test. (SpaceX)

SpaceX says Crew Dragon’s upgraded “Mk3” parachutes are almost ready to safely return astronauts to Earth and need to pass just a few more consecutive tests before NASA will have the data it needs to qualify them.

Although SpaceX originally hoped to pursue a program of propulsive landing for Crew Dragon and Cargo Dragon space capsules, that effort was canceled to avoid the major cost increases and delays NASA’s qualification certification requirements would have triggered. Already designed with parachutes as a backup, SpaceX quickly pivoted and redesigned those parachutes as the primary (if not sole) method of gently landing astronauts back on Earth.

That decision was likely made in late 2016 or early 2017 and CEO Elon Musk announced the program’s cancellation – as well as plans for “Red Dragon” Mars landings – in July 2017. For the next 18 months, SpaceX worked with suppliers and NASA to design and test a parachute system up to the space agency’s extremely rigid standards. Coincidentally, Cargo Dragon suffered a significant (but survivable) parachute failure the same year when one of its three main chutes failed to deploy before splashdown. Additionally, Crew Dragon’s first “Mk1” parachutes suffered their own failures during testing.

A Mk2 variant was designed and built to account for Mk1’s issues, but it too suffered failures during field tests, particularly struggling to make it through tests simulating the failure of one Dragon’s main parachutes. As a result, NASA further required SpaceX to add a fourth parachute, requiring a whole new round of tests and experimentation due to the significantly different dynamics it introduced. Mk2 testing continued into 2019 but SpaceX quickly switched gears and worked with its supplier to design an even more upgraded “Mk3” parachute, building off of a cutting-edge program to model parachute deployment more accurately than ever before.

Over the course of 2019, SpaceX began to extensively test Mk3 parachutes with a variety of drop tests. Unfortunately, even Mk3 suffered a failure or two at first, leading SpaceX and its supplier to refine the design even further.

“[In October and November,] SpaceX says it successfully completed thirteen consecutive tests of Crew Dragon’s new Mk3 parachutes in less than two weeks. That essentially blew [NASA administrator Jim] Bridenstine’s expectations out of the water, as SpaceX surpassed his predicted 10 tests and did so barely three weeks into the tentative 12-week window he set. SpaceX now has plenty of time to either continue testing Crew Dragon’s parachutes or refocus its efforts on other equally important qualification challenges.

Prior to those thirteen consecutive successes, SpaceX suffered two failures during single-parachute Mk3 testing. The first two development tests of the Mk 3 design used loads much higher than the parachutes would ever see in operation in an effort to better understand overall design margins and system performance. After a period of rapid iteration with parachute provider Airborne Systems, the faults responsible for those two stress-test failures were resolved and subsequent drop tests confirmed that Mk3’s suspension lines – the numerous lines connecting the parachute to Crew Dragon – are far stronger than those on Mk2.”

In the latest chapter of the Crew Dragon parachute saga, on December 4th, SpaceX tweeted that the spacecraft’s upgraded Mk3 chutes recently completed their seventh successful “system test”. On November 3rd, CEO Elon Musk tweeted that one such multi-chute test had already been completed but said SpaceX wanted to successfully complete ten such consecutive tests before it would feel fully confident in the upgraded parachutes.

If the seven tests SpaceX is now describing are part of the same planned series that kicked off in early November, then those seven were likely consecutive successes and leave just three more tests (give or take) to go. Additional testing may well be required by SpaceX, NASA, or both parties, but if Mk3 continues to perform as well as it has over the last two months, Crew Dragon’s recovery systems ought to be well on their way to NASA certification. Once NASA gives the go-ahead on Crew Dragon’s parachutes (and every other facet of the spacecraft), SpaceX can proceed with its Demo-2 mission, set to be SpaceX’s inaugural astronaut launch and likely to mark the first time the US has launched its own astronauts in nearly nine years.