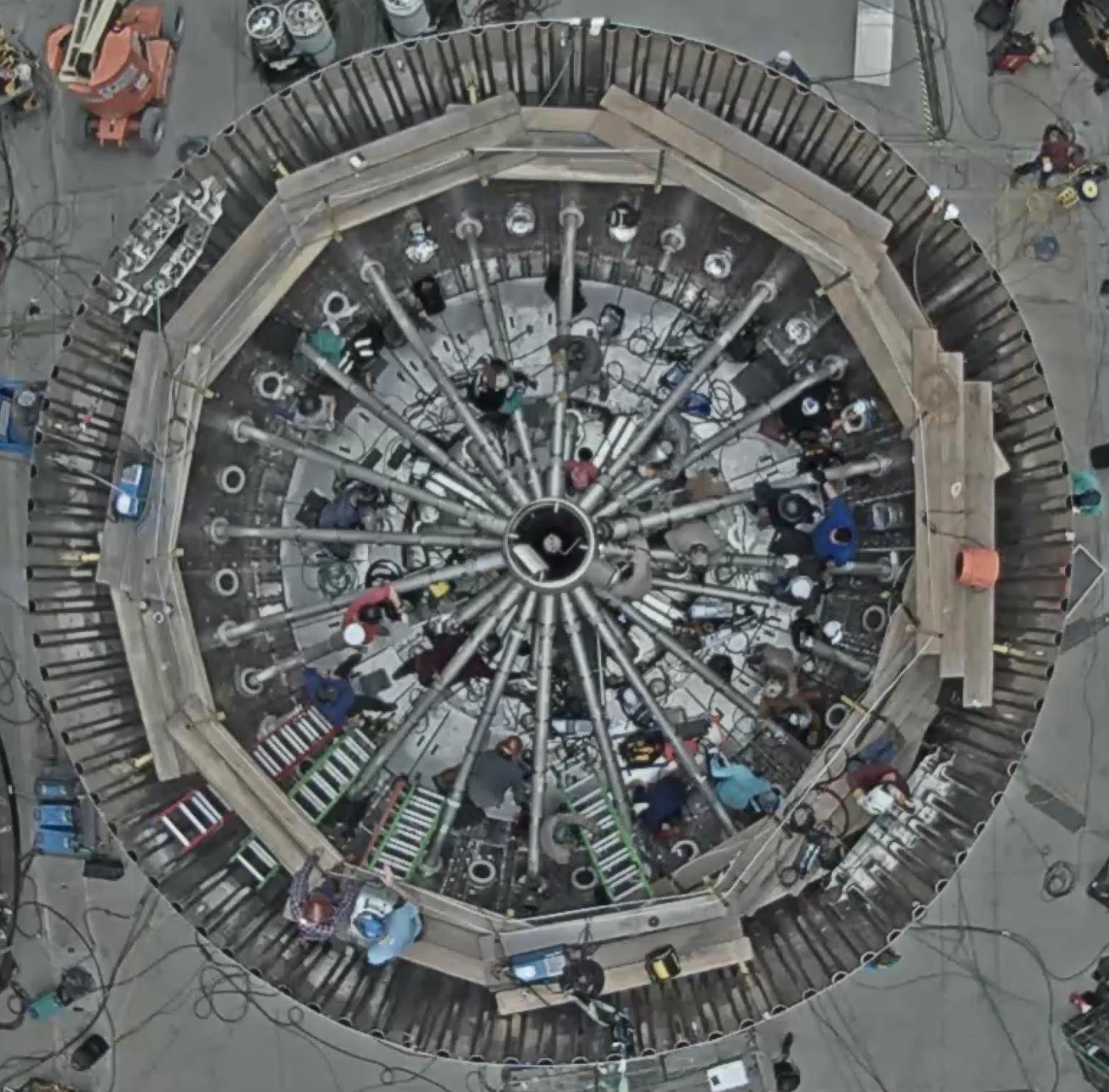 CEO Elon Musk has revealed the first glimpse of the most complex, important, and unproven part of Starship’s record-breaking Super Heavy booster.

Known as the engine section, the aft end of Super Heavy is likely where the fate of early booster prototypes will lie. For the most part, Super Heavy is just a colossal duo of steel propellant tanks that is – to an extent – even simpler than its smaller Starship upper stage, which needs two types of Raptor engines, flaps, a bevy of maneuvering thrusters, and more. However, at the booster’s base, SpaceX must design, fabricate, and assemble a nightmarishly crowded and complex mechanical structure capable of mounting, fueling, and powering anywhere from 29 to 33 Raptor engines.

Simultaneously, that structure and all associated plumbing must withstand the force and pressure of more than 2000 metric tons of cryogenic liquid oxygen and the 7500 tons (16.5 million lbf) of thrust those Raptors can generate. That’s just the bare minimum, though.

Beyond the extraordinary mechanical stress it must withstand, Super Heavy’s thrust section also needs to be able to survive the hellish, violent environment created by almost three dozen powerful rocket engines on one side while the structure is effectively half-submerged in a cryogenic fluid, subjecting the puck and dome to brutal thermal conditions. Last but certainly not least, the exterior of Super Heavy’s thrust structure must be able to survive the mechanical and thermal hell of hypersonic atmospheric reentry with zero cushioning of the blow.

The forces involved are difficult to imagine. At full thrust, Super Heavy Booster 4’s 29 Raptor engines (eventually expanding to 33 on future cores) will likely produce more than 5500 metric tons (12.1 million lbf) of thrust, making it both the largest and most powerful rocket booster ever built or tested. At full thrust, those 29 Raptors will consume more than 17 metric tons (~38,000 lb) of cryogenic liquid methane and oxygen – equivalent to around ten Tesla Model 3s worth of propellant – every single second.

Ultimately, Musk says that the next generation of Starship’s Raptor engine – “V2.0” – “is a major improvement in simplification,” presumably making life a bit easier for the engineers that have to design Super Heavy’s hellish engine section plumbing and the technicians that have to fabricate and assemble it. However, there’s just no getting around the fact that a single rocket booster with dozens of engines is going to have an extraordinarily complex thrust section. Only time will tell if SpaceX’s extensive launch vehicle expertise is up to the task.