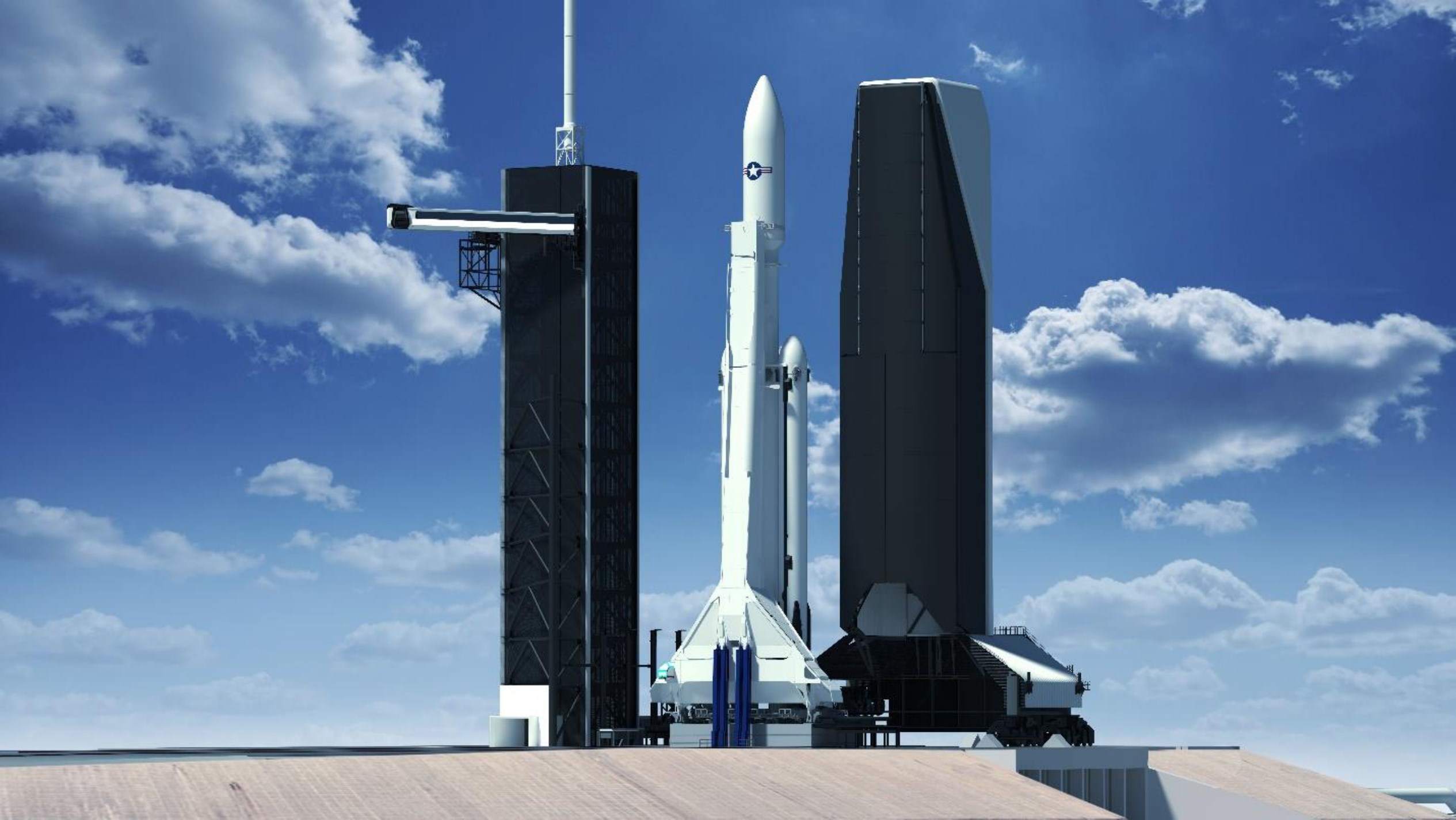 SpaceX has released renders of its proposed Pad 39A 'Mobile Service Tower', meant to enclose Falcon 9 and Falcon Heavy rockets for processing. (SpaceX)

SpaceX has published the first renders of a massive tower (MST) designed to fully enclose a Falcon Heavy rocket, giving the US military access to certain prized satellite payloads even when the vehicle is vertical at the launch pad.

Stretching some 70 m (230 ft) tall and 12.2 m (40 ft) wide, building a movable tower capable of fully enclosing SpaceX’s Falcon Heavy rockets is no mean feat. Known as a mobile service tower (MST), SpaceX has managed to avoid the need for the expensive, complex, and extremely unwieldy infrastructure for the first decade of Falcon 9 and Falcon Heavy launch operations. Instead, SpaceX has designed its launch vehicles around the concept of horizontal integration, meaning that its Falcon rockets can be entirely integrated and prepared for flight before going vertical for launch. This approach has ensured easy, cheap access to the entire rocket and payload up until the last few days of static fire and launch operations, lowering the cost of launch.

Beyond Russian spaceflight operations, SpaceX, and a handful of other companies around the world, nearly all other major launch providers and space agencies – including the United Launch Alliance (ULA), Arianespace, ISRO (India), and CNSA (China) – rely almost exclusively on vertical integration. With its new Pad 39A mobile tower, SpaceX will soon join that small club, giving it the ability to compete on completely even footing with ULA and others for lucrative military launch contracts.

While one only has so much flexibility when designing a mobile skyscraper that needs to survive Florida’s hurricane seasons, SpaceX’s solution is still visually unique. According to the company, the mobile service tower (MST) it plans to build at its Kennedy Space Center (KSC) Launch Complex 39A (Pad 39A) facilities will measure 87m (284 ft) from its wheels to the top of its roof, while the tower’s ‘crawler’ base will be some 36m x 33m (118 ft x 108 ft) wide, a quarter of the area of a US football field.

During launch preparations, SpaceX would integrate its Falcon Heavy and Falcon 9 rockets like usual, joining boosters, side boosters, upper stages, and recovery while still horizontal inside its Pad 39A hangar. The integrated rocket would be installed (still horizontal) on 39A’s transporter/erector (T/E) – the white steel structure seen backing the rocket above – and rolled out to the launch mount, where the T/E is effectively bolted into the ground before lifting the rocket vertical.

Once vertical, SpaceX’s new tower would slowly crawl about 40m (130 ft) to fully encompass a given Falcon Heavy or Falcon 9 rocket. Once safely inside the MST, 11 different levels would give SpaceX and customer technicians access to the vast majority of the rocket. Most importantly, the tower would allow SpaceX technicians to crane certain US military payloads – encapsulated inside a Falcon payload fairing – onto the top of the rocket.

At the end of the day, that’s really the only reason SpaceX needs such a tower – certain customers (the US military and, to a lesser extent, NASA) have certain payloads that they either can’t or won’t tweak to allow for horizontal integration. No schedule for the MST construction has been mentioned yet but knowing SpaceX, it’s safe to say it could be completed sooner than later once environmental impact studies are complete and construction permits have been secured.