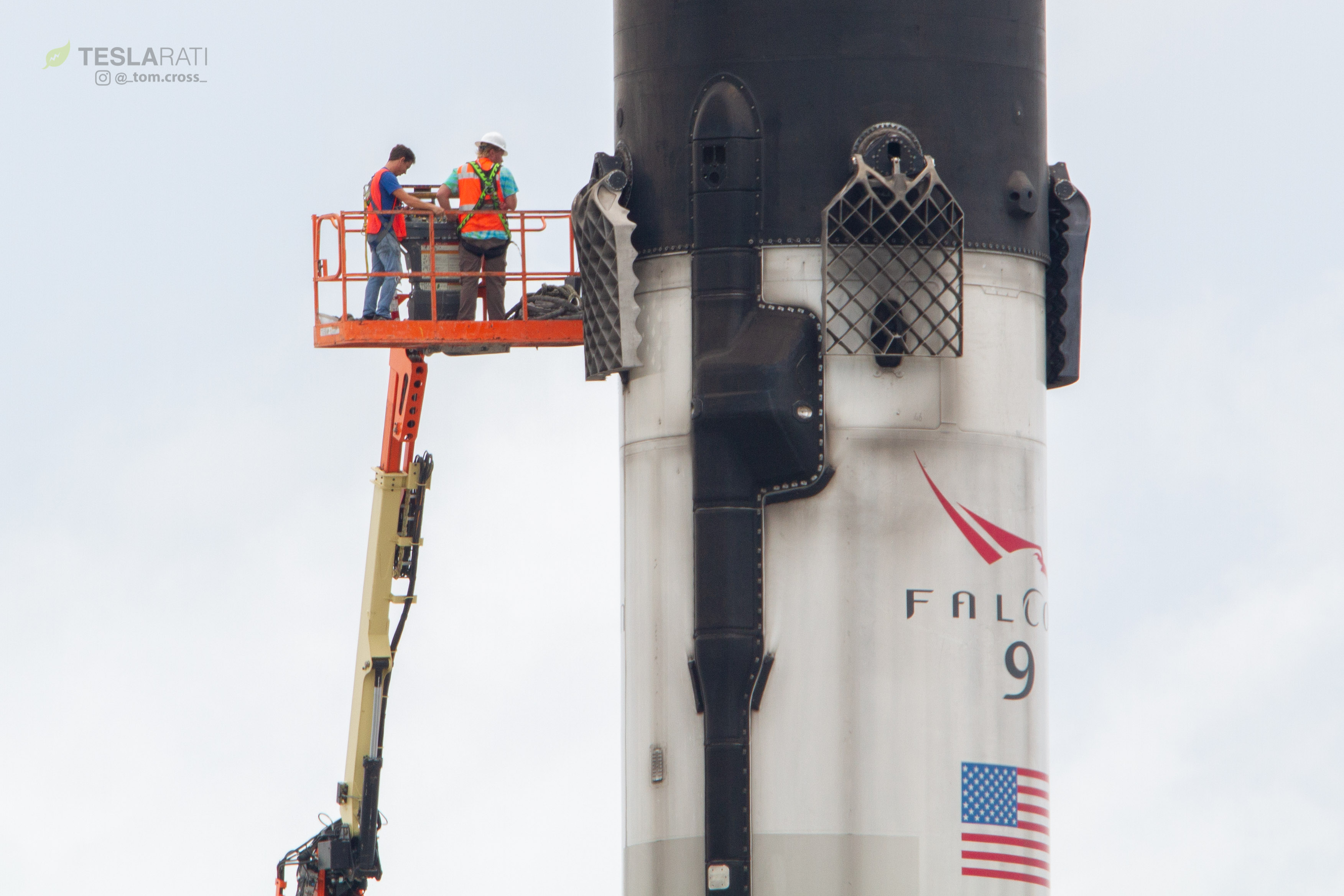 SpaceX’s first launched and landed Falcon 9 Block 5 booster has returned to port after a handful of days at sea, hopefully marking the beginning of a long and storied future of commercial missions. The booster – numbered B1046 – appears to be in extraordinarily good shape, more or less unscathed after a relatively high-energy reentry. Photographer Tom Cross documented the historic return in person at Port Canaveral.

B1046 arrives at Port Canaveral after an eventful inaugural launch and landing. (Tom Cross)

After detaching from the rocket’s second stage, which went on to successfully inject Bangladesh’s first communications satellite into a geostationary transfer orbit, B1046 reached a peak of around 110 km before reentering Earth’s atmosphere. Traveling 2 kilometers (1.2 miles) per second, Block 5 eventually completed a soft landing 500 miles off the Florida coast on the drone ship Of Course I Still Love You. The 25th successful Falcon 9 booster recovery, B1046 marked that historic achievement in proper style, dressed with large, black sections of the new SpaceX-developed thermal protection system, among dozens of other major improvements included in the launch vehicle’s “Block” upgrade. 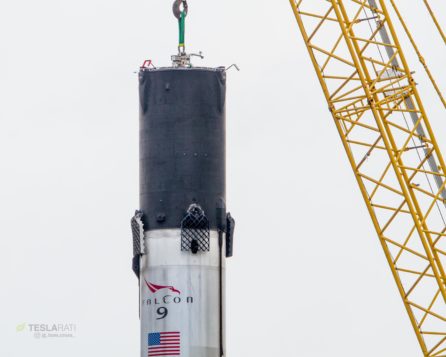 Technicians attach an older interstage-grabber to lift B1046 after its first recovery. (Tom Cross) 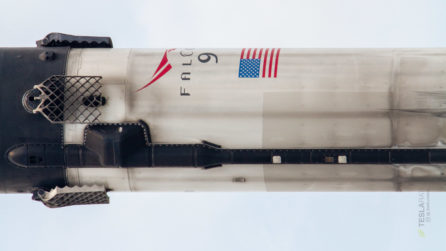 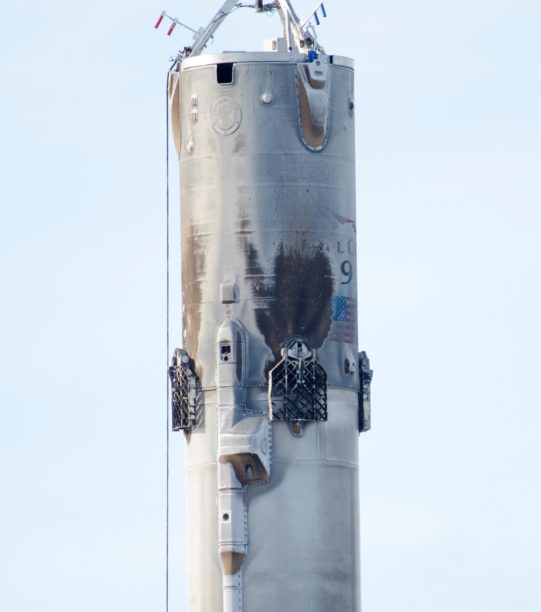 The central aluminum grid fin of 1029 features a dramatic lack of several vanes, likely melted off during the intense heat of reentry. (Reddit, u/thedubya22) 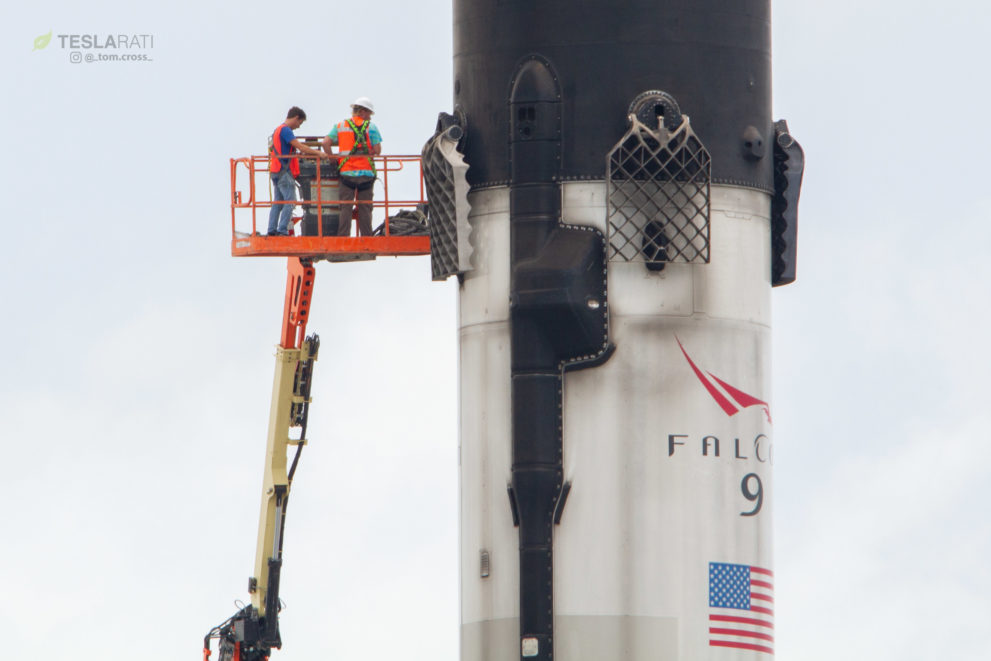 While not visible, the most significant improvements are likely to be found at the base of the first stage’s octaweb – now assembled with bolts instead of welds – in the form of a dramatically improved heat shield around its nine Merlin 1D engines (also upgraded, of course). One of the Falcon recovery technicians showed some exceptional interest in the shield and Merlins, likely documenting their condition in extreme detail to inform engineering reviews of the pathfinder rocket after its first flight test. Per CEO Elon Musk’s pre-launch phone call with members of the press, SpaceX means to do an extremely thorough disassembly and analysis of B1046 in order to (hopefully) validate many thousands of hours of design, engineering, modeling, and testing. If those reviews are promising, it’s extremely likely that B1046 will be reassembled and flown many more times, perhaps one day becoming another historic monument to SpaceX’s reusability program and Block 5 upgrade. 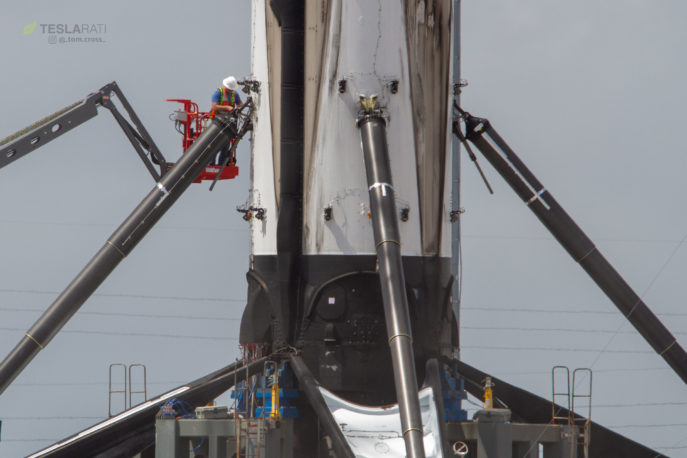 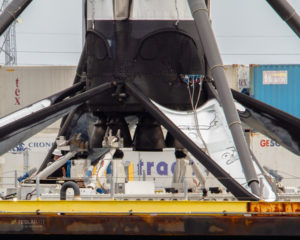 Octagrabber hangs on to B1046 as OCISLY arrives in port. (Tom Cross) 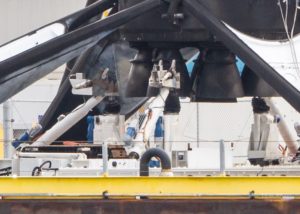 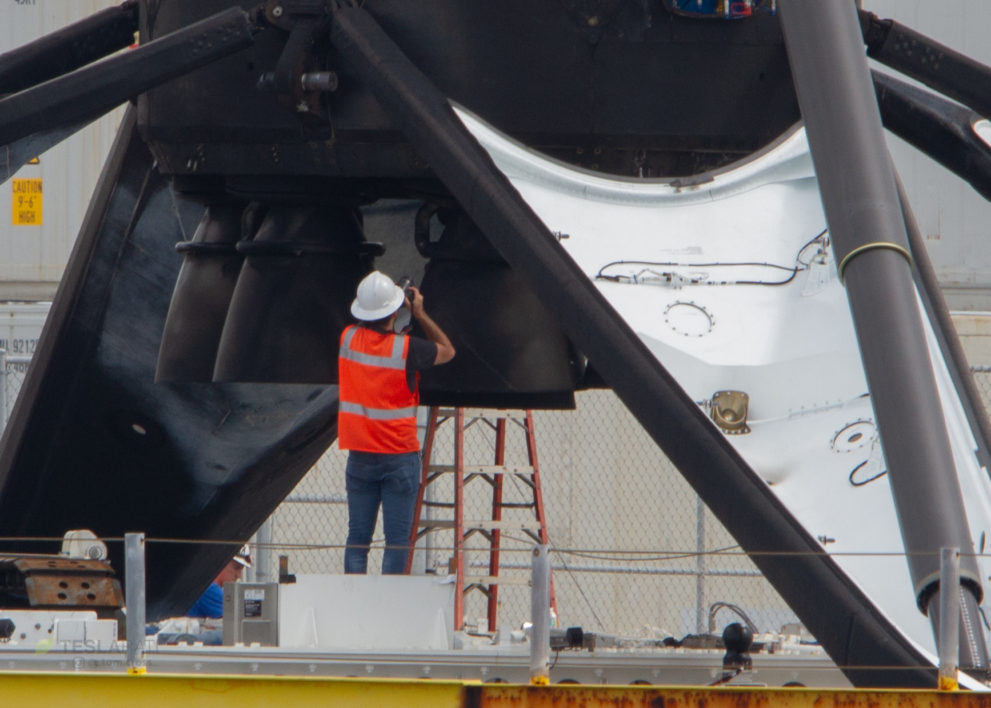 Meanwhile, this mission also marked another routine operation for SpaceX’s robotic stage-securing robot, unofficially nicknamed Roomba or Octagrabber. This custom-built robot is used to better ensure the safety of SpaceX’s recovery crew by allowing them to remain on an accompanying vessel while securing the booster robotically, significantly lowering the chances of it sliding around or tipping over in high sea states.