Falcon 9 B1048 returned to Port Canaveral on Feb. 24 after the rocket's third successful launch and landing. (Tom Cross)

SpaceX’s latest successful launch and landing has wrapped up with Israeli Moon lander Beresheet on its way to Earth’s neighbor, Indonesian communications satellite PSN-6 headed to its final orbit, and the second thrice-flown Falcon 9 Block 5 booster safely returned to Port Canaveral aboard drone ship Of Course I Still Love You (OCISLY).

Known as Falcon 9 B1048, its third successful landing and recovery will almost certainly be this booster’s last after its fourth launch was officially assigned to a critical Crew Dragon launch abort test, one that the booster is very unlikely to survive. According to SpaceX CEO Elon Musk, that test could occur as early as April and will push the first flight-proven Crew Dragon space capsule to its limits.

After weathering what Musk also described as the toughest reentry and heating conditions yet experience by a Falcon 9 booster meant for recovery, Falcon 9 B1048 landing (almost) flawlessly aboard drone ship OCISLY, stationed roughly 700 km (430 mi) off the Florida coast. Hinted at by the booster’s very slight lean on the recovery vessel’s deck, B1048 most likely cut thrust (or ran out of fuel) just before the optimal stop point, causing the rocket to fall a few unintended feet onto OCISLY and eat into part of the aluminum honeycomb ‘crush-core’ present on all Falcon landing legs.

Reentry, even at 1/4 of orbital speed is hard pic.twitter.com/Tk2KJblWH5

In essence, that crushable aluminum acts as a very rough form of emergency suspension meant to minimize potential damage to the fragile structure of Falcon booster propellant tanks at the cost of its landing legs. In the case of B1048’s third landing, the lean appears to be no more than a few degrees – scarcely out of the ordinary, at least relative to past leaning boosters. Most notably, Falcon 9 B1023 experienced a similar anomaly and a far worse lean after its first landing, an experience that did not apparently impact its ability to launch for the second time as a side booster for Falcon Heavy’s inaugural launch. 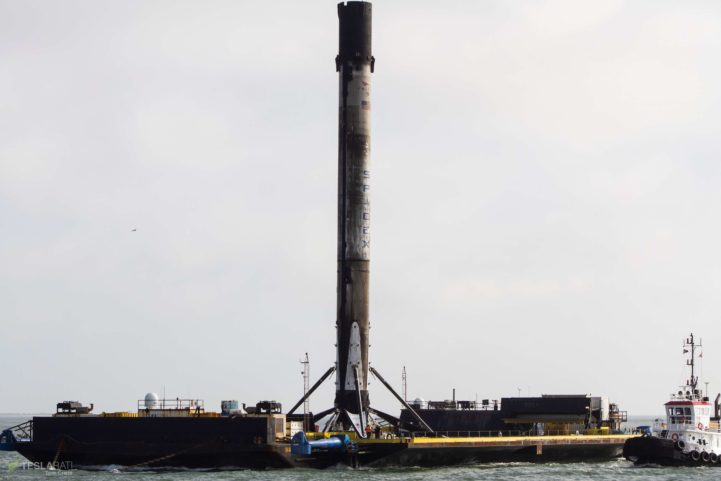 Falcon 9 B1048 returned to Port Canaveral on February 24th after its third successful launch and landing. (Teslarati) 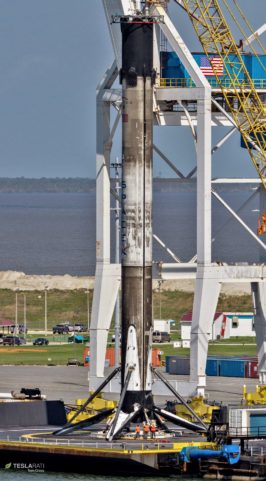 Octagrabber robots are meant to prevent boosters from sliding off of drone ship decks by anchoring them with their tank-like weight. (Teslarati)

B1048’s slight departure from a perfect trajectory should thus pose no problem for in-place plans for the rocket’s fourth (and likely final) launch. Known as Crew Dragon’s in-flight abort (IFA) test, SpaceX specifically requested the inclusion of a second abort test (above and beyond NASA’s testing requirements) to fully verify that astronauts could be pulled to safety at any point during launch. In 2015, the company completed a pad abort test of Crew Dragon, demonstrating that the spacecraft could escape from a failing rocket while static on the launch pad. The in-flight abort is precisely what it sounds like: a demonstration that Crew Dragon can safely escape a failing rocket while in flight. More than simply being in flight, the goal is to demonstrate a successful abort at the point of peak aerodynamic stress of Falcon 9 and Dragon, known as Max Q.

For Cargo Dragon launches, Falcon 9 has typically averaged dynamic forces of about 25 kPa (~4 psi), roughly equivalent to 2.5 tons of force per square meter. During launch, either the payload fairing or Cargo/Crew Dragon are subjected directly to those forces, often requiring a significant period of lower throttle to mitigate the forces those sensitive assemblies experience. Given that Crew Dragon’s abort scenario accelerates the capsule and trunk from a relative speed of zero to nearly 350 mph (150 m/s) in five seconds, the dynamic forces (i.e. mechanical loads and heating) the spacecraft is experiencing could jump 50% or more almost instantaneously. 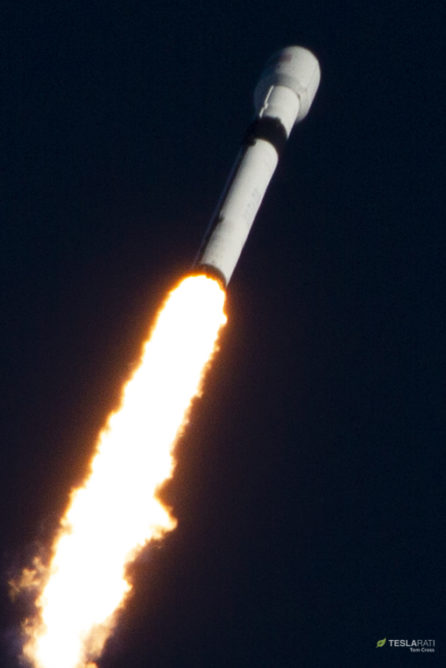 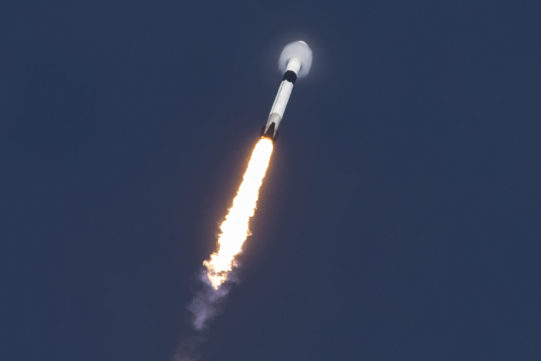 While it doesn’t necessarily correlate with Max Q, vapor cones like the one on B1047’s fairing are a partial visualization of Max Q forces. (SpaceX) 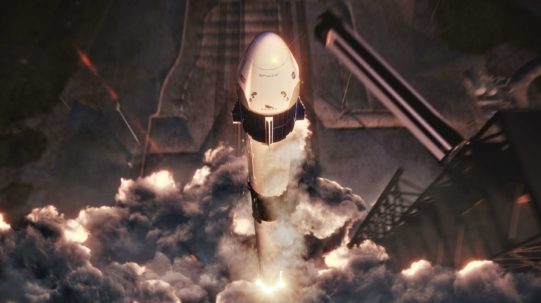 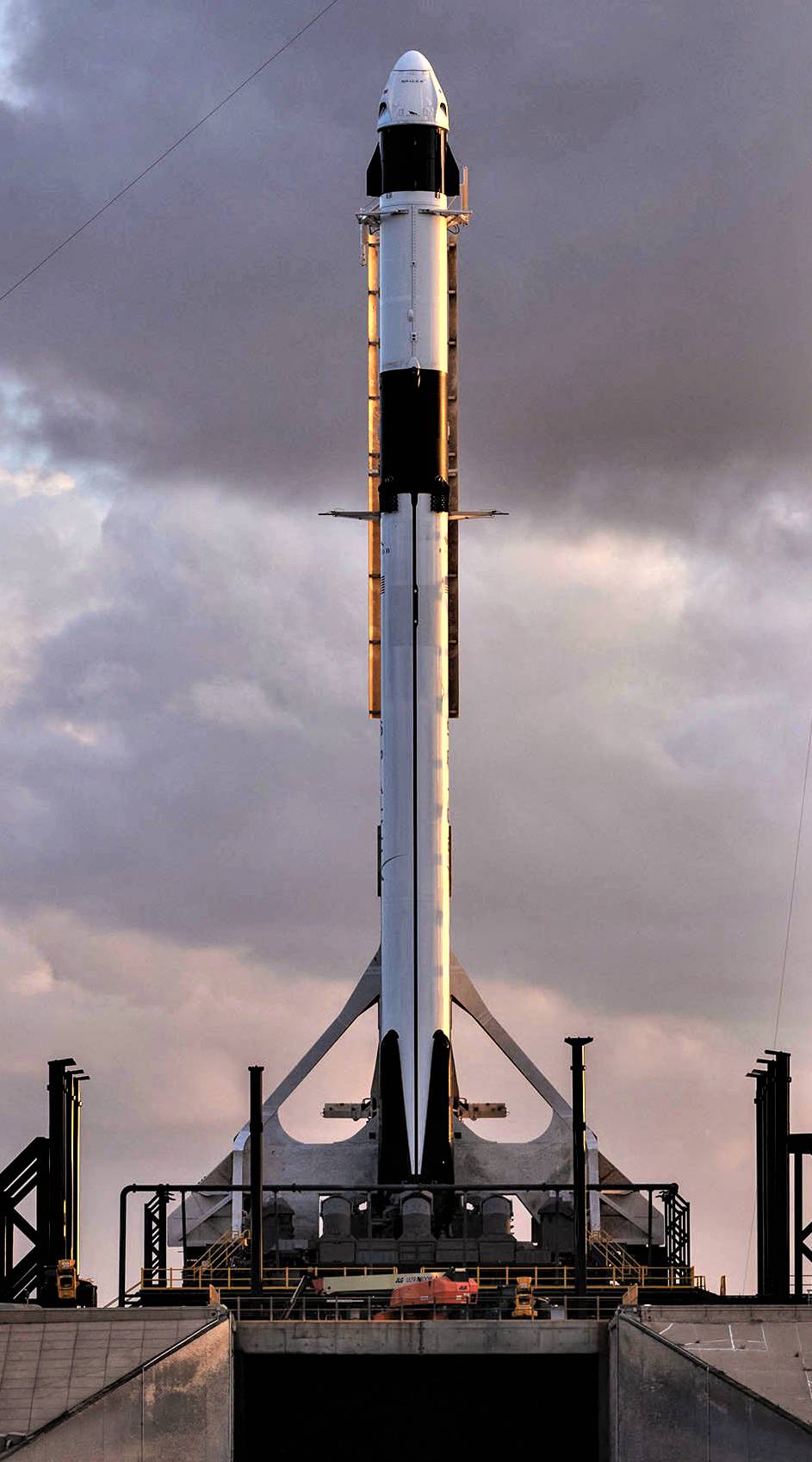 After Crew Dragon aborts, the Falcon 9 stack – featuring B1048 and a full-fidelity upper stage with a mass simulator in place of its MVac engine – will be instantaneously exposed to those same dynamic forces, experientially equivalent to bellyflopping from an Olympic-height diving platform. The upper stage may actually be better off than the booster thanks to the generally smooth dome at its stern, whereas Falcon 9’s booster would have its interstage – a deep, open cylinder – exposed to the same airflow if or when the upper stage is torn away. At the point of abort, Falcon 9 will most likely be in the process of shutting down its Merlin 1D engines, effectively removing the booster’s control authority and leaving it at the mercy of the atmosphere. SpaceX’s CRS-7 Cargo Dragon failure (caused by the second stage losing structural integrity mid-flight) is actually a decent representation of what is likely to happen to B1048 and its upper stage.

Given the potential destructive power B1048 will face, not to mention the fact that the booster will likely not have grid fins or landing legs installed, today’s recovery will probably be the last time the rocket returns to port and prepares for another launch. Explicitly dependent upon the refurbishment of DM-1’s Crew Dragon capsule, SpaceX’s in-flight abort is not expected to occur until June 2019, although Musk has indicated that the aspirational target is to perform the test as early as April, perhaps less than 60 days after the capsule is scheduled to land in the Atlantic Ocean.