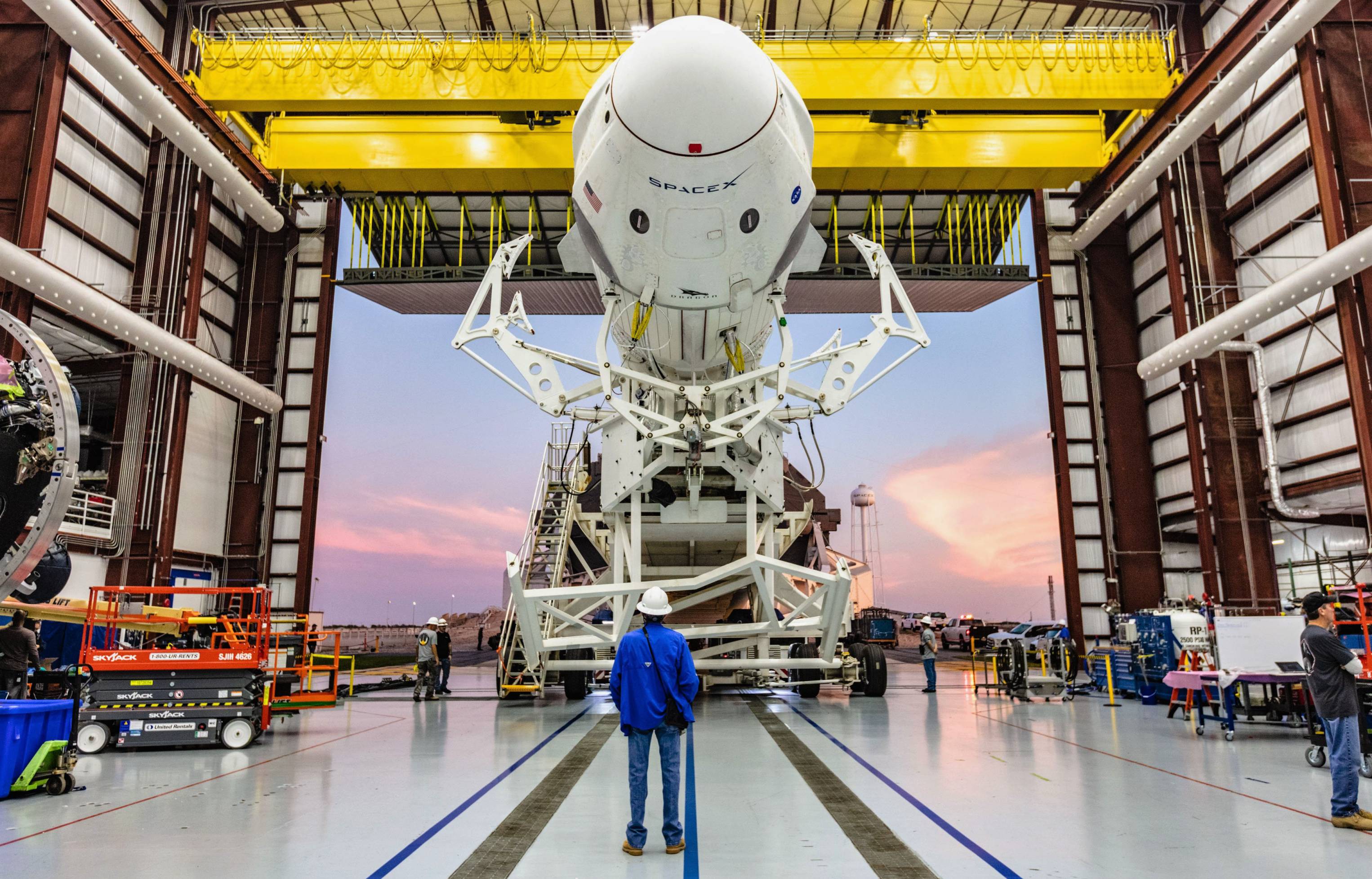 The integrated DM-1 Crew Dragon 'stack' rolled out to Pad 39A for the first time in the first few days of 2019. (SpaceX)

SpaceX has rolled Falcon 9 and Crew Dragon out to Pad 39A for the second time ever in preparation for a full wet dress rehearsal (WDR) and static fire – no earlier than Jan. 23 – of booster B1051’s nine Merlin 1D engines, preparing for an orbital launch attempt that slipped from NET Feb. 9 to Feb. 16 earlier this week.

While this milestone is important for myriad other reasons, it happens to be exceptionally unique thanks to one particularly surprising feature: Falcon 9 rolled out for its static fire with Crew Dragon (the rocket’s payload) still attached. This will be the first time in more than 28 months – since Amos-6, the last catastrophic Falcon 9 failure – that SpaceX has performed its routine on-pad static fire with a valuable payload attached to the rocket.

The Falcon 9 and Crew Dragon are now in position at launch pad 39A in readiness for a crucial test firing of its nine first-stage engines as soon as tomorrow: https://t.co/kYCr6Nzd0I pic.twitter.com/9VDXJL7ZLX

On September 1st, 2016, a SpaceX Falcon 9 experienced the rocket family’s second catastrophic failure ever when supercool liquid oxygen froze around a COPV’s carbon fiber wrappings, expanding just enough to breach the ultra-high-pressure vessel. Falcon 9 and its ~$200M Amos-6 satellite payload were completely destroyed, while Launch Complex 40 (LC-40) suffered tens of millions of dollars of damage that would effectively require it to be completely rebuilt over the course of more than a year.

After Amos-6, SpaceX immediately halted the practice of including customer payloads on Falcon 9 during static fires, used to save 24-48 hours of time between static fire and launch. SpaceX nevertheless retained the option if customers were to explicitly request it, otherwise wisely concluding (likely with more than a little encouragement from insurance companies) that expediting schedules by a few dozen hours was not worth the entirely unnecessary risk to satellite payloads that often cost hundreds of millions of dollars and take years to build.

@SpaceX @CrewDragon2 on the pad ahead of tomorrow's static fire test. Sorry, didn't have my DSLR with me, so crappy cell phone photo is all I can offer.

Given that SpaceX has stuck to that practice for all 38 Falcon 9 launches it has performed between Amos-6 and the present day, it seems all but guaranteed that the first orbit-ready Crew Dragon’s presence on Falcon 9 during its static fire has been done only at the specific request of the launch customer – in this case, NASA. It’s probably not hyperbolic to argue that Demo-1’s (DM-1) Crew Dragon is the most valuable, important, expensive, and irreplaceable spacecraft SpaceX has ever attempted to launch, having likely spent millions of work hours building, changing, refining, and testing it to meet NASA’s exacting and sometimes absurd requirements.

If Falcon 9 B1051 were to fail with Crew Dragon atop it during its Pad 39A static fire, it might be possible for the DM-2’s Crew Dragon to be completed and modified for an uncrewed test flight with just six months of delay, assuming Falcon 9’s mode of failure could be investigated and repaired to NASA’s satisfaction. However, the destruction of the DM-1 capsule and trunk could almost indefinitely delay SpaceX’s first crewed launch, dependent upon an inflight-abort test that is supposed to use the refurbished DM-1 capsule, while the Crew Dragon currently supposed to launch after DM-2 is unlikely to be ready before August or September 2019. 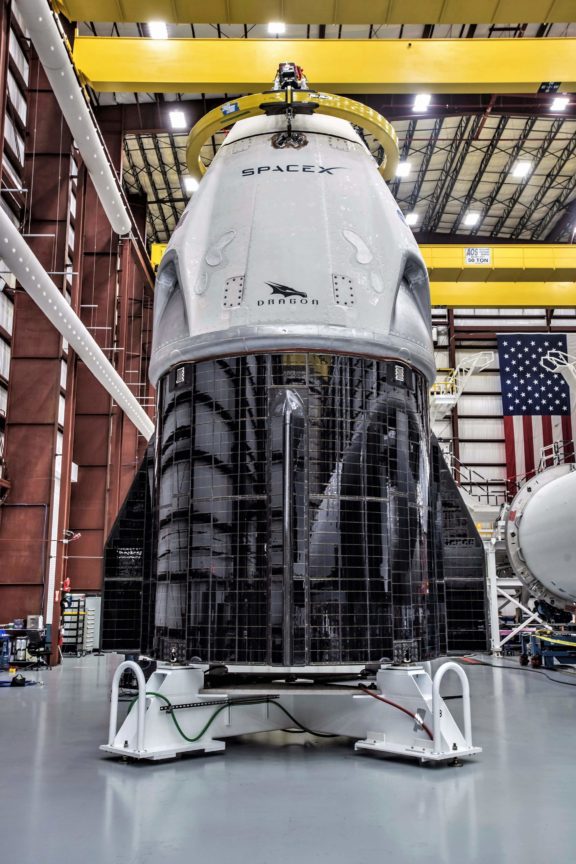 The first complete Crew Dragon is likely just days away from rolling out to Pad 39A atop Falcon 9. (SpaceX) 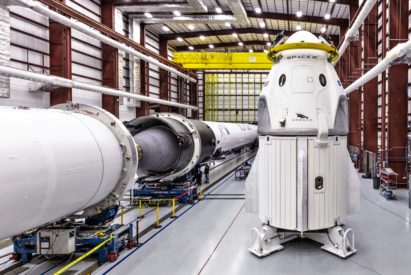 DM-1 and Falcon 9 were greeted by an extraordinary – albeit mildly bittersweet – dawn during their first-ever trip out to Pad 39A. (SpaceX) 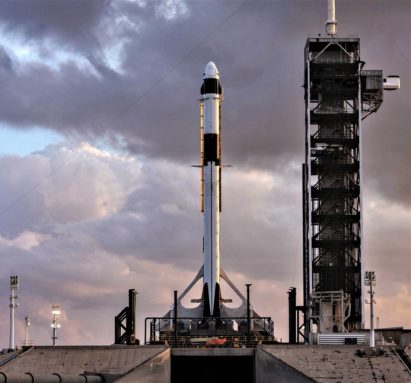 Ultimately, NASA likely requested that Crew Dragon remain atop Falcon 9 for this static fire out of some desire for a full-fidelity test environment and complement of data. There is perhaps a very limited chance that Crew Dragon will be fully fueled with hydrazine (MMH/NTO) and have its launch escape system (LES) active and ready to go in the event of a rocket failure.

Why they deemed the immense potential risk to be worthwhile is far less clear. Whether it is being done out of complacency or a desire for expediency or ultra-realistic test data, the risk is the same. In theory, Falcon 9 has been tested extensively and should operate perfectly, just as expected. So was Amos-6’s Falcon 9.