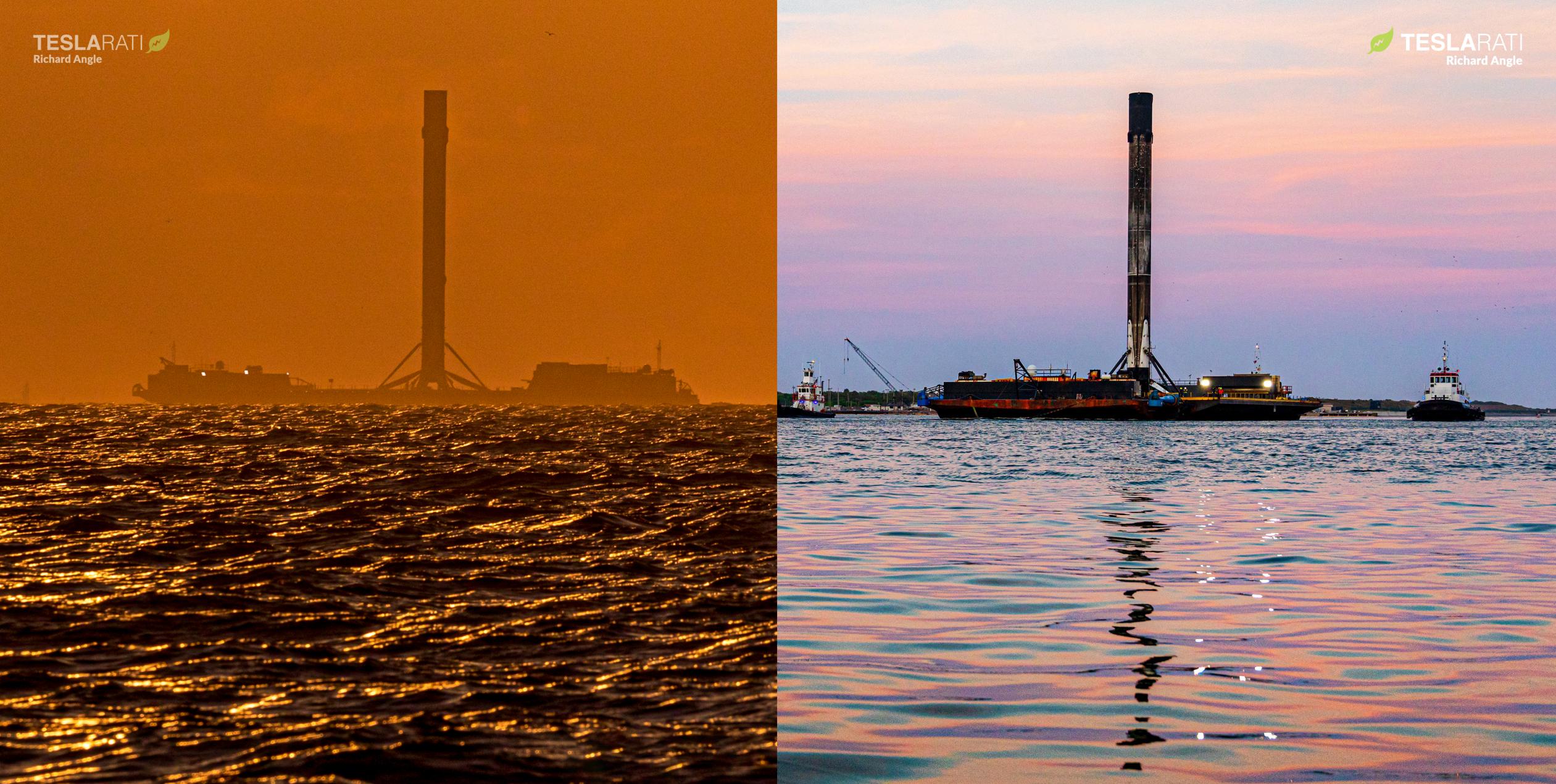 With two back-to-back Starlink launches, SpaceX drone ship Of Course I Still Love You (OCISLY) has returned to port twice in two weeks with Falcon 9 boosters and some of the most beautiful sunrise and sunset backdrops yet seen.

Virtually identical beyond the boosters that launched them, both B1060 and B1058 were tasked with supporting two missions to deliver batches of 60 new Starlink satellites into low Earth orbit. Of the ten launches SpaceX has completed in 2021, eight have been Starlink missions, altogether placing 490 satellites weighing almost 130 metric tons (290,000 lb) into orbit.

Incredibly, Falcon 9 B1058 and B1060 alone have been responsible for six of those ten launches, making the pair – in no uncertain terms – the shining workhorses of SpaceX’s rocket fleet. Put in a slightly different way, SpaceX is now regularly flying multiple Falcon boosters on an almost monthly basis. With just a handful of similarly-capable boosters, SpaceX could feasibly achieve 60+ Starlink launches annually while still maintaining an almost secondary fleet of (relatively) lightly-used boosters for customer missions.

As it turns out, SpaceX already has three once-flown Falcon 9 boosters of the same age (batch?) as B1058 and B1060 – at least two of which are waiting for crucial flight-proven debuts for NASA and the US military. After acing Crew Dragon’s operational Crew-1 astronaut launch debut last November, B1061 is scheduled to become the first flight-proven liquid rocket booster to launch astronauts with NASA’s Crew-2 mission on April 22nd. B1062, having successfully launched the US military’s GPS III SV04 navigation satellite in November 2020, is scheduled to launch a second GPS III satellite in July 2021 – a first for the US military.

Meanwhile, Falcon 9 B1063 may have been transported from California to Florida after successfully launching NASA and ESA’s Sentinel 6A Earth observation satellite and completing SpaceX’s first Vandenberg launch in almost 18 months – also in November 2020. If all three of those new once-flown boosters were to enter SpaceX’s general-purpose fleet after their next major customer missions and prove to be as low-maintenance as B1058 and B1060, those five rockets alone could potentially support an annual cadence of 50-60+ Starlink launches.

It’s also possible that – having finally seen the clear viability of flight-proven rockets writ large – NASA and the US military will effectively choose to keep B1061, B1062, and possibly B1063 primarily in-house, so to speak. Depending on their contracts, by paying SpaceX a premium or forgoing discounts for flight-proven first stages, both could feasibly ensure that those boosters remain mostly (or totally) exclusive to NASA or US military missions.

Ultimately, whether SpaceX gets to add those comparatively new boosters to its Starlink and commercial fleet, B1058 and B1060 show no signs of stopping and – perhaps alongside B1049 and B1051 – could easily sail past their ten-flight milestones before the year is out. Many, many more spectacular drone ship recoveries to come, in other words.