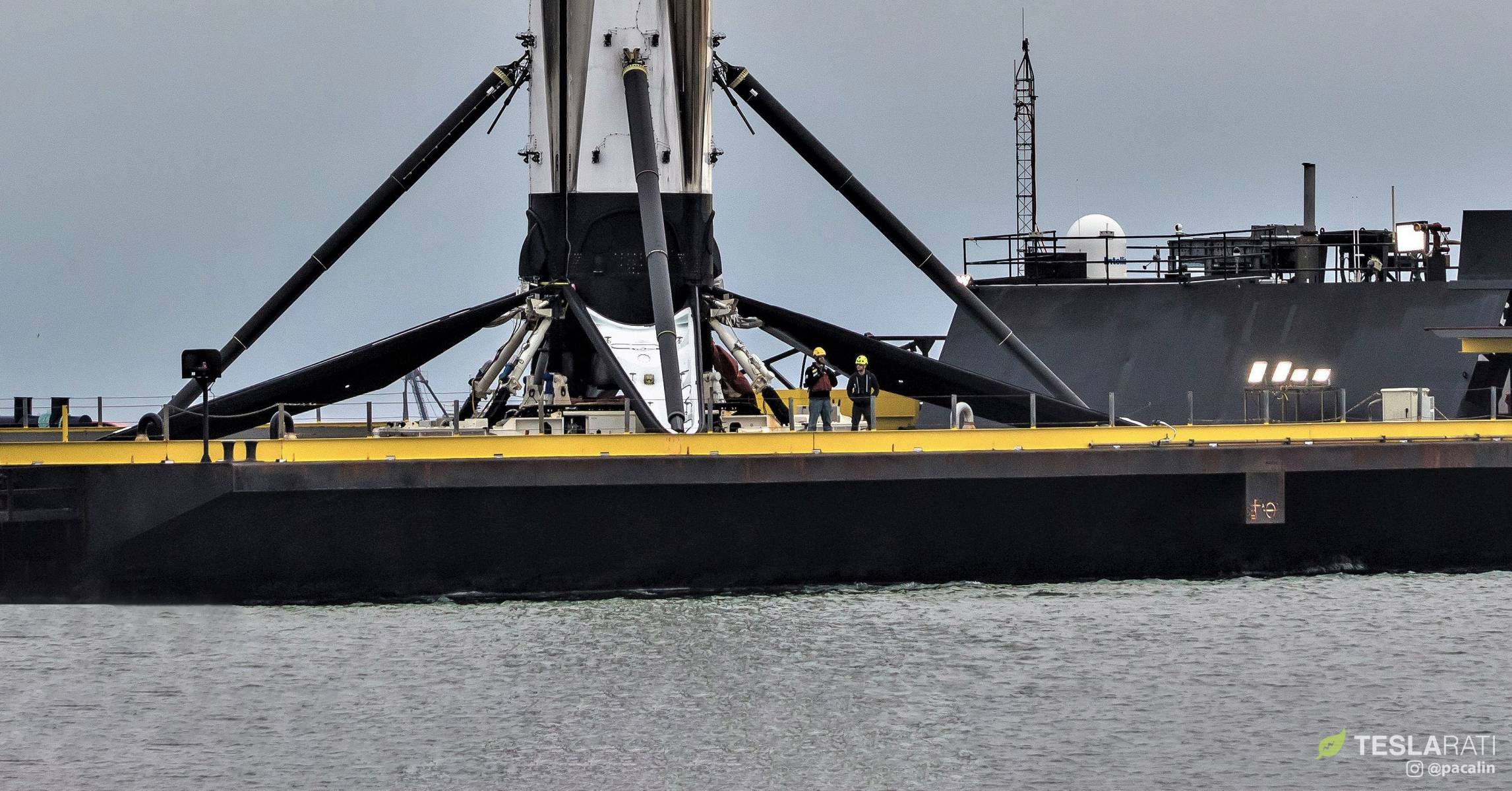 Falcon 9 B1051 returned to Port Canaveral for the first time aboard drone ship Of Course I Still Love You on March 5th. (Pauline Acalin)

SpaceX and the company’s drone ship Of Course I Still Love You (OCISLY) have successfully wrapped up their second Falcon 9 recovery in less than two weeks, bringing booster B1051 back to Port Canaveral to be broken over and refurbished for a second launch.

Following its support of Crew Dragon’s thus far flawless launch debut, the booster will likely be exceptionally easy to turn around for its next flight. That second launch could occur as early as late April for Cargo Dragon’s 17th mission, a consequence of NASA’s desire to keep its SpaceX missions on boosters that are ‘in ‘ (i.e. only new boosters or flight-proven boosters that have only launched NASA payloads).

Although B1051’s reentry profile was relatively slow and gentle with main engine cut-off (MECO) and booster separation occurring at ~1.9 km/s (4250 mph) and 85 km (53 mi), its recovery was made intriguingly difficult by high seas at drone ship OCISLY’s Atlantic Ocean station. These bad conditions were readily visible at several points during SpaceX’s DM-1 , with OCISLY heeling several degrees as the Falcon 9 booster’s Merlin 1D engine lit up the surrounding area like a floodlight. In fact, B1051’s post-landing struggle could actually be seen live as the booster clearly slide several meters across the drone ship’s deck almost immediately after touching down.

Robin's clutch screencap shows this perfectly, plus a few screenshots. OCISLY was heeling a solid 5+ degrees in just the few seconds before touchdown.https://t.co/eV5CIokPb5 pic.twitter.com/cz4LBqJR3N

This issue of boosters sliding about and generally being difficult to deal with is actually one of the leading motivations that lead to SpaceX developing , a tank-like robot used to remotely secure recovery Falcon 9 first stages while minimizing the risk to the recovery team. In a situation like DM-1, with B1051 already sliding around OCISLY’s deck immediately after a night landing, would nominally be remotely activated and controlled, crawling from its garage to grab Falcon 9’s hold-down clamps and secure the stage with its own weight.

It’s actually unclear whether is capable of this sort of remote operation without SpaceX technicians aboard OCISLY, nor if SpaceX – as of late – has even tried to attempt to secure Falcon 9 boosters at night. The process of transferring crew between ships in heavy seas is actually quite dangerous on its own, so it would be less than surprising to hear that SpaceX’s recovery managers have cut down on nighttime operations in bad weather if can only be operated with crew present on OCISLY. For B1051, the drone ship, a tugboat, and crew boat GO Quest remained in the vicinity of the landing target until the following morning (still March 2nd) before beginning the ~500 km (~300 mi) trek back to Port Canaveral. Greeted by moody low-hanging clouds and scattered showers, observers were actually able to capture the rare sight – as pictured above – of being driven back into its blast shield/garage.

Regardless, future Commercial Crew launches – aside, perhaps, from SpaceX’s second demonstration launch (DM-2) later this year – will likely be able return-to-launch-site (RTLS) landings at the company’s Florida landing zones, much like Falcon 9 boosters already do after Cargo Dragon (CRS) missions. According to VP of Mission Assurance Hans Koenigsmann, B1051 had to conduct a drone ship (ASDS) recovery at sea due to NASA’s desire for conservative performance reserves to guard against the potential (and extremely unlikely) failure of one or several Merlin engines during the launch’s boost stage. In 2012, Falcon 9 suffered its first and only (known) in-flight Merlin failure, an anomaly which the rocket’s autonomously avionics perfectly dealt with to save the primary mission (Cargo Dragon’s operational debut, CRS-1). A secondary Orbcomm communications satellite sadly failed to make it to its operational orbit, however, classifying the mission as a partial failure. More recently, there have been unconfirmed hints pointing to other potential in-flight Merlin 1D failures, albeit during booster recovery attempts instead of the main boost phase. Whether or not those anomalies actually occurred, NASA is clearly all about extreme conservatism and ‘safety first’ approaches for the Commercial Crew Program (or at least SpaceX’s side of it).

SpaceX’s successful recovery of B1051 marks the company’s third launch and landing of 2019, thus far averaging a relatively slow one mission per month. While schedules can change, it currently appears that Crew Dragon’s DM-1 orbital debut will be the only SpaceX launch in March, barring Falcon Heavy’s own commercial debut occurring in the last few days of the month. According to a SpaceX representative speaking earlier this year, the company is actually aiming to equal or even surpass its 2018 record – 21 launches – in 2019, requiring a minimum average of two launches per month for the remainder of the year.

Numbers aside, SpaceX’s 2019 calendar will undoubtedly aim to surpass the number of major company milestones in a single year, a hard act to follow after 2017 and 2018. Ranging from the first operational Starlink satellite launches and the first SpaceX launch with astronauts aboard to major flight test and developmental milestones for the company’s next-gen Starship spaceship and Super Heavy booster, there are an incredible wealth of events to look forward to.