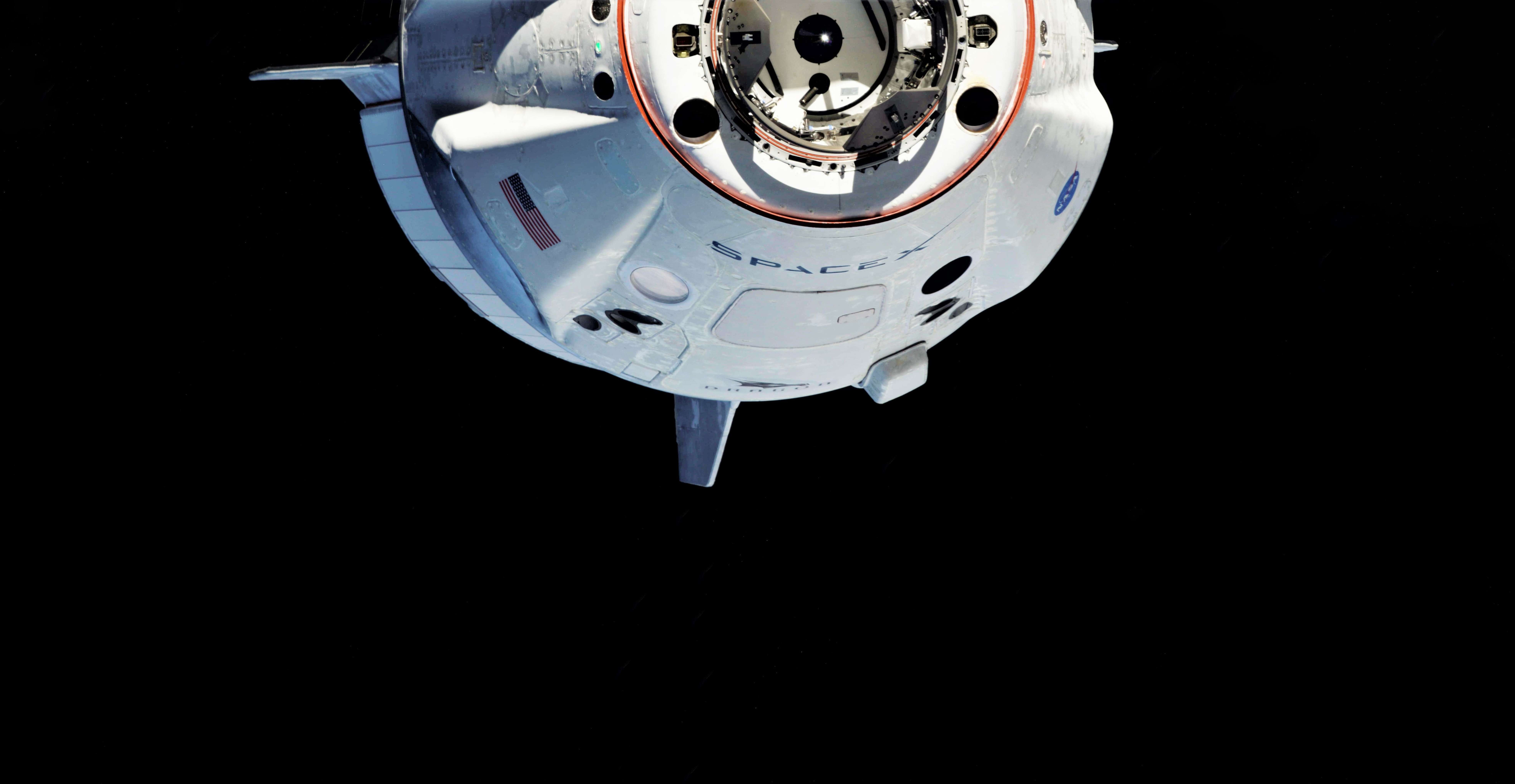 Taken by Russian cosmonaut Oleg Kononenko, the first high-resolution photos of SpaceX’s Crew Dragon spacecraft have begun to trickle in, offering the best views yet of the advanced human-rated spacecraft in its natural habit: Earth orbit.

Filling in for a distinct and uncharacteristic lack of official photos from NASA, the spacecraft’s inaugural spaceflight had thus far only been documented through NASA’s own live coverage of its International Space Station (ISS) rendezvous, limited to a relatively low-quality stream. With Oleg’s extremely high-resolution captures, we can begin to see SpaceX’s Crew Dragon with a level of detail previously only seen (if ever) on the ground.

He was monitoring from the Russian section, near the Soyuz, due to Rocosmos contingency procedures.

In all fairness to NASA, the ISS is operating with just three crew members, only one of which – Anne McClain – is a NASA astronaut. Particularly the case for an operation as critical as Crew Dragon’s inaugural orbital docking attempt, the task of controlling space vehicle rendezvous typically requires the full attention of one or two onboard astronauts – in this case, NASA’s Anne McClain and Canadian Space Agency (CSA) astronaut David Saint-Jacques. Veteran Russian cosmonaut Oleg Kononenko, however, was required by Roscosmos to remain in the Russian segment of the ISS in the event of a catastrophic anomaly during Crew Dragon’s approach to the station.

Just prior to launch, NASA broke the news that its Russian ISS partners had expressed concerns about the design of Crew Dragon’s approach trajectory, mainly focusing on the fact that a loss of control or communications while moving towards the station would leave no way for the spacecraft to naturally slow down. In other words, a dead spacecraft with a forward velocity would simply continue moving forward until it impacted the ISS, a bit like a semi-truck crash in slow motion (i.e. < 0.5 m/s or 1 mph). Weighing a hefty 12 tons (~26,600 lbs) during the arrival, even an extremely low-speed impact could undoubtedly do some damage to the ISS, although an actual hull breach (and thus a need to evacuate) would be extraordinarily unlikely. Still, Oleg was unable to significantly assist during the rendezvous itself, although the cosmonaut was front and center after Crew Dragon’s successful capture.

Taking advantage of the opportunity to observe, the cosmonaut was able to take a number of photos of Crew Dragon’s arrival, although the location of its docking port makes for a less than optimal perspective. Still, it’s hard to complain about any extremely high-quality photos of Crew Dragon, and Oleg’s are nothing short of spectacular. Highlighting the spacecraft’s nose section and docking port hardware, as well as limited views of its trunk section and body, this is quite possibly the first time SpaceX’s newest vehicle has been publicly shown off at this level of detail.

This privileged view includes a detailed look at Crew Dragon’s Draco maneuvering thrusters (elongated black ovals below SpaceX logo), two shrouds containing half of its SuperDraco abort thrusters (beneath the NASA meatball and flag emblem), the ‘Dragon Claw’ latch connecting the capsule and trunk (a smooth rectangle in the lower right), and even a (likely) duo of LIDAR arrays to the left and right of the docking adapter ring. Other notable appearances include the disposable trunk section’s radiators (a series of white rectangles visible on the left) and empennage, four fins meant to provide aerodynamic stability in the event of an abort. Just out of view is trunk’s sculpture-like solar array, curved to fit along the upper (relative) half of the section and fixed in place to minimize failure modes associated to deployable solar arrays like those used on Cargo Dragon.

Crew Dragon is backlit by an orbital sunrise over Earth’s limb on its inaugural March 2019 spaceflight. (Anne McClain) 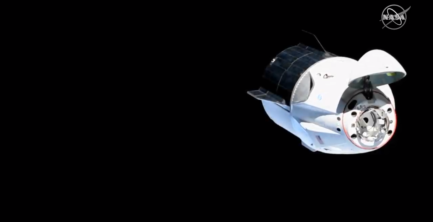 A better view of the solar array half of Crew Dragon’s trunk section. (NASA) 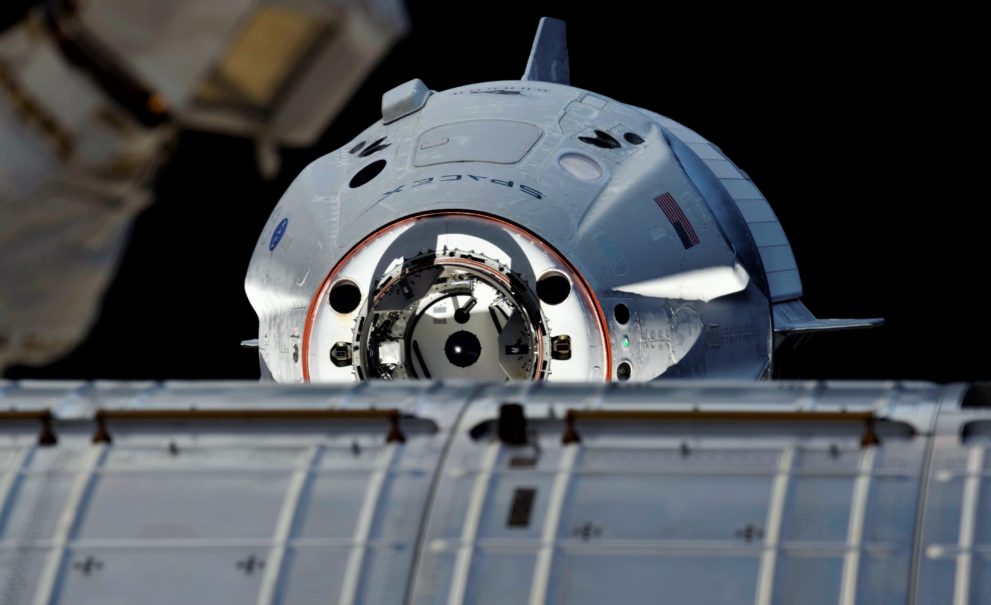 After completing its successful space station docking debut on the morning of March 3rd, Crew Dragon is scheduled to depart the ISS and reenter Earth’s atmosphere for a soft landing in the Atlantic Ocean around 9 am PST (14:00 UTC) on March 8th. According to the SpaceX and NASA hosts of the live docking coverage, Crew Dragon’s DM-1 departure from the ISS will also be treated to a hosted webcast, potentially all the way through reentry and recovery aboard the customized SpaceX vessel GO Searcher. According to CEO Elon Musk, there is a slight but present chance of anomalous behavior during reentry due to aerodynamic instability caused by the shrouds covering Crew Dragon’s unique SuperDraco abort system, while NASA continues to have concerns (largely unexplained) about the spacecraft’s redundant parachute system.

Regardless of technical concerns, Crew Dragon’s reentry will be the final critical challenge in the way of completing its first demonstration launch (DM-1), proceeded by a flawless launch and equally flawless docking. If successful, it will explicitly pave the way for the spacecraft’s second demonstration mission (DM-2), in which two NASA astronauts will be transported to the ISS. That major milestone could occur as early as July, although slips are probable.