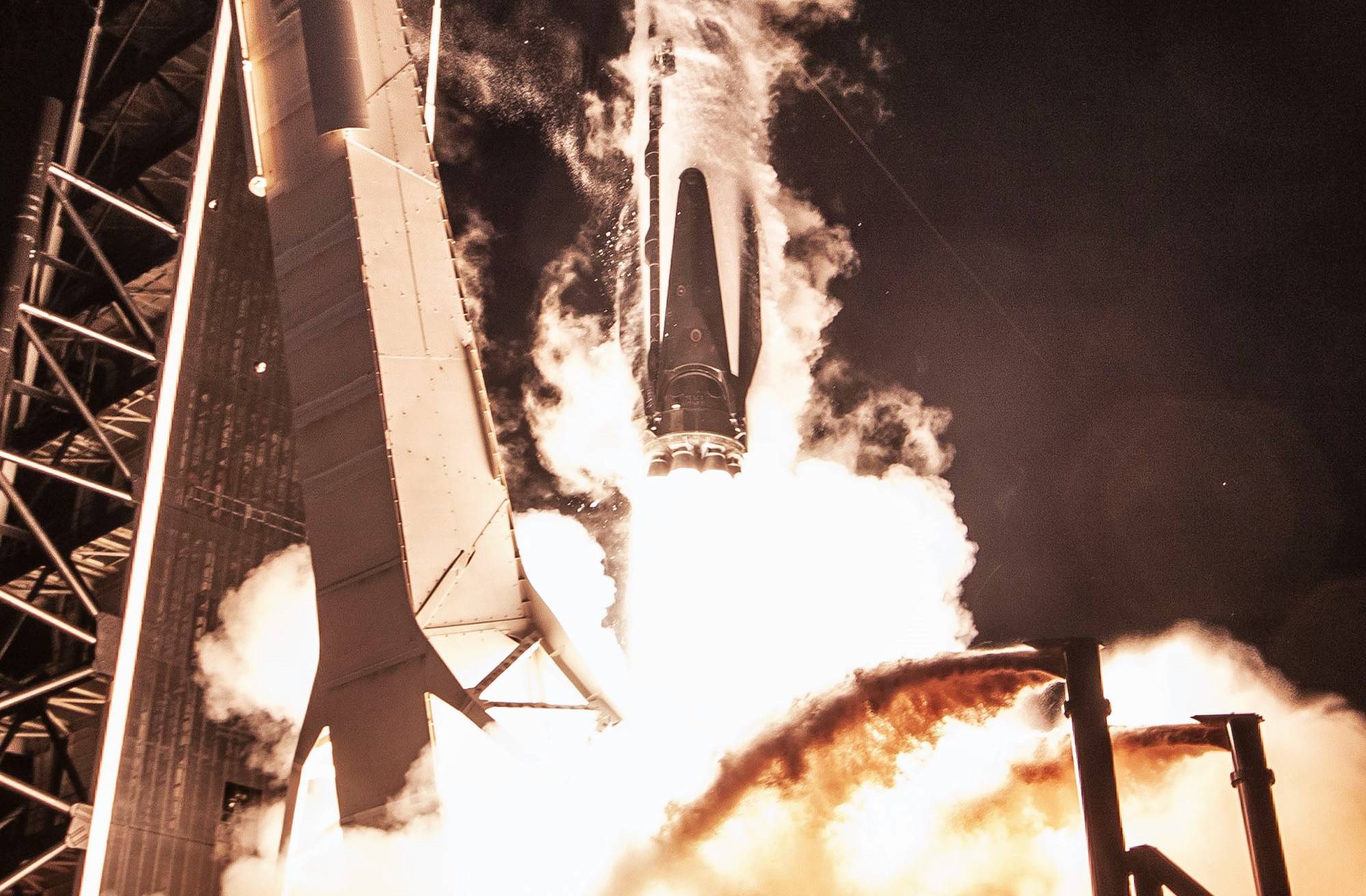 Falcon 9 could support SpaceX's first dedicated Starlink launch as early as April or May 2019. (SpaceX)

NASASpaceflight.com reports that SpaceX is tentatively on target for the dedicated launch debut of its first (relatively) operational Starlink satellites as early as mid-May, indicating that the company might actually meet an extremely ambitious deadline set last year by CEO Elon Musk.

Although the CEO had briefly hinted that SpaceX would launch at least one additional round of prototype satellites – complementing the two launched in February 2018 – before moving to dedicated Starlink missions, all signs point to this mystery case being a dedicated Falcon 9 launch. Whether or not the aggressive mid-May schedule holds, the first launch of operational Starlink satellites would be a huge milestone for SpaceX’s low Earth orbit (LEO) internet constellation, meant to eventually provide high-quality, affordable broadband access to almost anyone on Earth.

Linking the stars in phases

In November 2018, SpaceX filed a modification to the license it been previously granted by the FCC (Federal Communications Commission) in March, requesting that it be allowed to dramatically change the first phase of its Starlink satellite constellation. In short, SpaceX wanted to find a faster and cheaper way to deploy its first Starlink satellites as quickly as possible.

“[SpaceX] will utilize key elements from its experimental satellites, such as its sophisticated phased-array antennas and its advanced Hall-effect thrusters, as the foundation of a more efficient and cost-effective architecture that can rapidly accelerate deployment for the overall constellation while optimizing space safety.” – Starlink FCC license modification request, SpaceX, 11/8/2018

This modification almost certainly arose as a direct result of CEO Elon Musk’s June 2018 ultimatum, in which he reportedly fired Starlink executives deemed uncooperative in order to rapidly speed up the constellation’s time-to-market. In fact, according to Reuters, Musk challenged the Starlink team to begin launching the constellation’s first operational satellites just one year later (June 2019), an extraordinary aspiration standing a handful of months after the group had launched its first two early satellite prototypes. According to a source spoke with Reuters, Musk reportedly clashed with several managers, preferring an approach that launched simpler, cheaper satellites as quickly as possible instead of methodically iterating through multiple prototypes to arrive at an optimal solution the first time.

While both sides presumably have good reasons for their stubborn preferences, Musk may well be in the right at the end of the day, particularly given the sheer level of competition to complete LEO internet constellations and begin serving customers. An overly cautious approach could risk being so late to market that multiple competitors, ranging from relatively established entrants OneWeb and Telesat to more obscure companies like WorldVu and Space Norway. Barely a week ago, OneWeb completed the first successful launch of its constellation, placing six demonstration satellites in orbit to prove their technology and reduce risk prior to commencing operational launches with 30+ satellites apiece. Furthermore, both Tesla and SpaceX have more or less flourished while using the same approach, evidenced by a culture of continuous improvement where both electric cars and rocket engines are constantly upgraded and improved upon. Falcon 9 famously features a bevy of versions or “blocks”, culminating recently in Falcon 9 Block 5’s major reusability and reliability optimizations.

A little crazy, but it works

Whether or not Musk can be more than a little crazy, it’s nearly impossible to coherently deny the fact that his strategy of delivering a minimum viable product as quickly as possible and gradually improving it over time has a polished record of success. Once again, Falcon 9 is the best and most relevant example in the context of Starlink. SpaceX’s now-workhorse rocket began in a form (Falcon 9 V1.0) nearly unrecognizable compared to its most recent edition, featuring far less performance, no reusability, and an older and less capable version of Merlin. Falcon 9 V1.1 was a radical – almost clean-sheet – from the first vehicle and significantly more powerful while also offering structures that could support grid fins and landing legs. V1.1 also moved to Merlin 1D (M1D, ), optimized for more power, efficiency, and reusability, as well as greater ease of manufacture. Several additional iterations later, and – while Block 5 does share a great deal of heritage with its predecessors – Falcon 9 is also a near-total redesign, replacing or dramatically changing nearly all critical systems aside from the basic structure of its aluminum alloy propellant tanks.

In short, when Elon Musk and other SpaceX engineers originally conceived of Falcon 9 in the early 2000s, 2018’s Falcon 9 Block 5 was effectively the rocket they were imagining. Rather than spending countless hundreds of millions of dollars to privately design, test, and redesign multiple prototype iterations, Musk et al built a minimum viable product, began launching payloads for paying customers (both government and commercial), and used the company’s reputation, commercial success, and flight experience to shape Falcon 9 into the industry leader it is today.

Put simply, there is no reason to think that the same approach will not prove equally fruitful when applied to satellites instead of rockets. While SpaceX has yet to receive an FCC grant for its Starlink modification request, the company summarized its updated strategy in the November 2018 filing. The request effectively “relocates” the first phase of its 4,425 (now 4209) satellite LEO constellation, moving 1584 satellites from an 1100 km to 550 km orbit and simplifying the design of the first operational spacecraft by using just one spectrum segment (Ku-band) instead of two (Ku- and Ka-band). Hardware to exploit that additional spectrum will be developed and added to Starlink satellites and ground hardware down the road. As such, regardless of how unrefined SpaceX’s first operational Starlink satellites could be, the launch will be just as much of a milestone.

SpaceX will also be able to demonstrate a truly unique aspect of Starlink that helps bolsters its competitive advantage: vertically integrated production and launch of its satellites. Based on FCC permit requests filed last month, SpaceX plans to conduct the first dedicated launch from its Florida-based LC-40 pad, with the Falcon 9 booster landing more than 600 km (370 mi) offshore on drone ship I Still Love You (OCISLY). Assuming SpaceX is targeting the 550 km orbit described in its Starlink license modification, this allows the payload mass to be roughly baselined alongside the company’s Iridium NEXT missions, which sent a bit less than 10,000 kg (22,000 lb) of satellite and dispenser to an orbit of ~650 km, a relatively similar orbit mission concept. However, Falcon 9’s Iridium NEXT drone ship recoveries typically happened more like 250 km (155 mi) off of the West Coast, indicating that SpaceX’s inaugural dedicated Starlink launch will require significantly more performance out of the rocket.

In other words, Starlink’s operational debut could very well be the heaviest payload SpaceX has yet to launch on a single mission. Weighing less than 500 kg apiece with a dispenser (per Iridium NEXT) around 10% of the total payload mass, SpaceX will likely launch anywhere from 20-40 Starlink satellites at once, depending on the final mass of these first spacecraft and their custom-built dispenser. While delays from the late-April to mid-May launch target are arguably quite likely, the fact that the first operational Starlink launch is tentatively scheduled even less than half a year away bodes very well for tangible constellation progress in 2019.