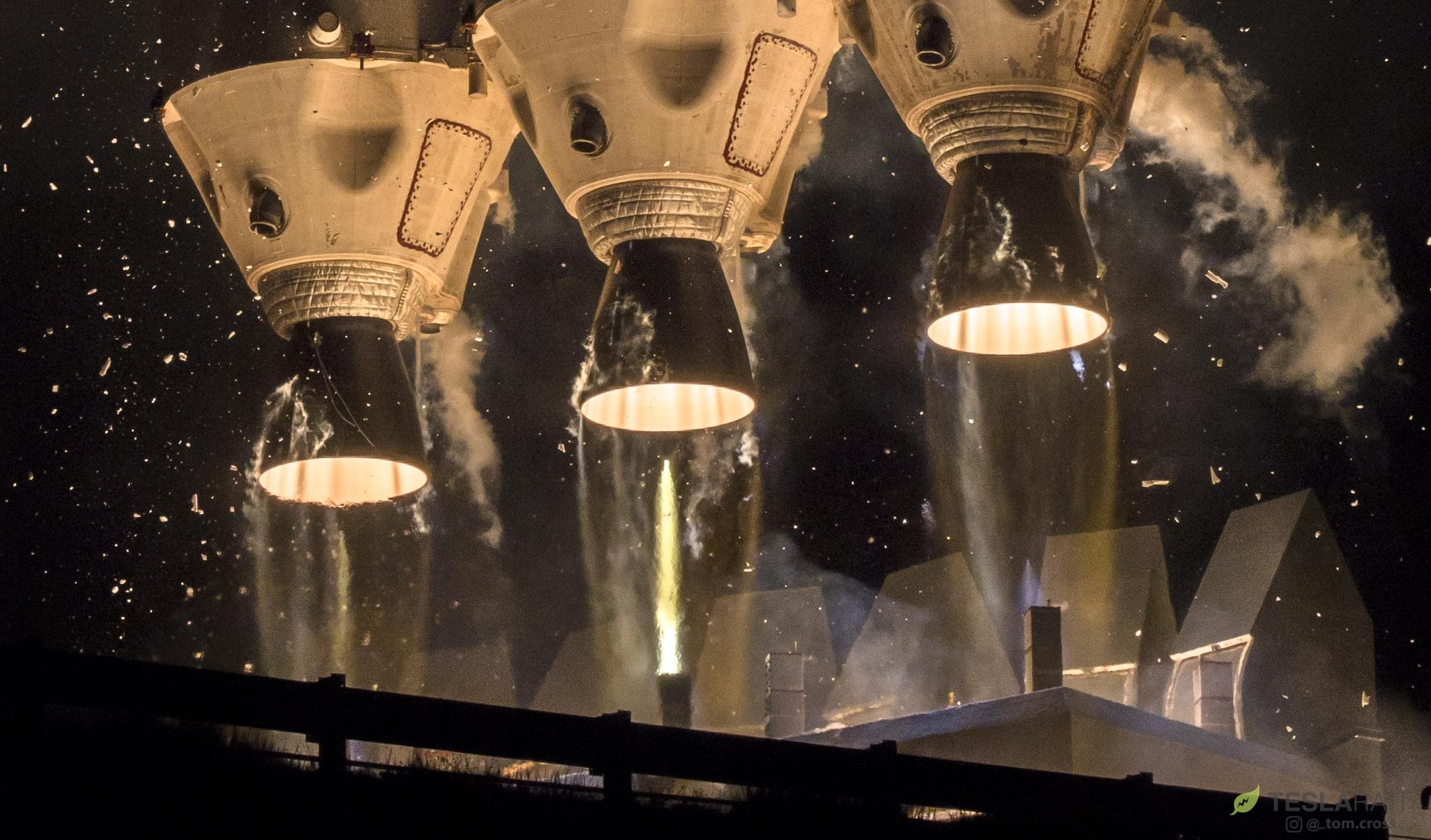 According to RussianSpaceWeb, SpaceX’s Falcon Heavy rocket is under serious consideration for launches of major European and Japanese payloads associated with the Lunar Orbital Platform-Gateway (formerly the Deep Space Gateway).

Currently targeting launch readiness in the mid-2020s, those heavy scientific and exploratory government payloads are eyeing Falcon Heavy at the same time as the United Launch Alliance’s (ULA) Delta IV Heavy – the most powerful operational rocket prior to FH’s debut – is busy wrapping up a scientific launch for NASA and prepping for another launch in September for its singular anchor customer, the National Reconnaissance Office (NRO).

You know that camera I set 150’ away from the rocket? Well… ????? What do you think?? @Teslarati @ulalaunch @NASA @NASAGoddard @MiopsTrigger pic.twitter.com/aQwli0JoU8

A breathtaking mission to the sun

United Launch Alliance (ULA) has just completed the ninth successful launch of its Delta IV Heavy rocket, originally developed by Boeing in the 1990s and debuted in 2004 before the company’s launch vehicle subsidiary joined forces with Lockheed Martin’s own rocket branch. Delta Heavy’s August 12th mission saw the rocket send a small NASA payload known as Parker Solar Probe (PSP) on a trajectory that will eventually place the craft closer to the Sun than any human-made object before it. In pursuit of a better understanding of how exactly our solar system’s namesake functions and behaves, PSP will also become the fastest object ever created by humans, traveling at an extraordinary 200 km/s (120 mi/s) at the zenith of its deepest periapses (the point at which PSP is closest to the sun).

In a fitting send-off for the small heat-shielded spacecraft, Delta IV Heavy’s launch was a spectacle to behold, with clear skies and the cover of darkness combining to magnify the best of the rocket’s telltale features. Upon ignition of its three massive RS-68 rocket engines, each producing over 700,000 lb-ft of thrust, the rocket is held down for several seconds in a process that famously culminates in what appears to be self-immolation just before liftoff, a consequence of the rocket burning off excess hydrogen fuel expelled during the ignition process. Unlike Falcon 9’s dirtier kerosene-oxygen combustion, Delta Heavy’s hydrogen and oxygen fuel produce a flame that is nearly transparent, aside from a bright orange tint created by materials in each engine’s ablative (read: designed to disintegrate) nozzle. 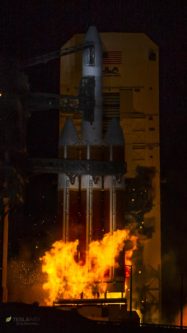 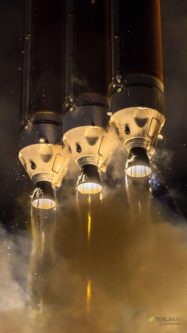 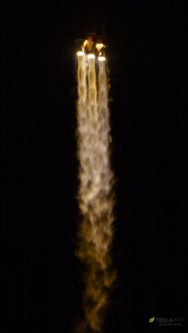 Delta IV Heavy takes to the sky on its tenth launch, with Parker Solar Probe in tow. (Tom Cross) 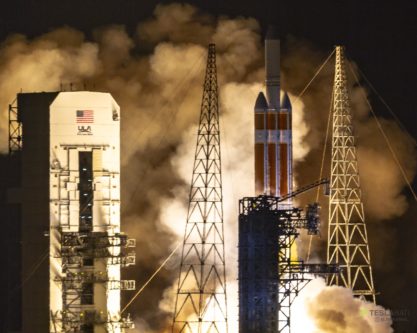 Delta IV Heavy takes to the sky on its tenth launch, with Parker Solar Probe in tow. (Tom Cross)

While Delta IV Heavy has used one of its other nine successful launches for a NASA payload (a test flight of the Orion capsule), all seven remaining missions were conducted for the USAF (1) and the National Reconnaissance Office (NRO; 6), and all six remaining missions on the rocket’s manifest also happen to be for the NRO. Put simply, Delta IV Heavy would not exist today if the NRO did not have an explicit and unflappable need for the capabilities it offers. The primary downside is cost: DIVH costs at least $350 million and usually more than $400m per launch. Thankfully for ULA, the NRO has very few problems with money, and the agency’s estimated annual budget of $10 billion (2013) is more than half of NASA’s entire budget.

After Falcon Heavy’s successful debut, Delta IV Heavy’s monopoly over heavyweight NRO and USAF payloads is rapidly coming to an end, and both agencies are almost certainly attempting to equally quickly certify SpaceX’s newest rocket for critical national security space (NSS) launches. With that influx of the slightest hint of competition, Delta IV Heavy’s ~$400 million price tag starts to look rather painful in comparison to Falcon Heavy’s cost ceiling of around $150 million, potentially much less in the event that 1-3 of its boosters are recoverable. That competition likely won’t kill Delta IV Heavy, thanks entirely to the anchor support of the NRO, but it most certainly will guarantee that Delta Heavy is retired the moment ULA’s next-gen Vulcan rocket is ready to take over, likely no earlier than 2024.

Outside of the NRO, however, there is a surprising amount of interest in Falcon Heavy for interesting (and heavy) government payloads, particularly with respect to the NASA/ESA/JAXA/Roscosmos cooperative lunar space station, known as the Lunar Orbital Platform-Gateway.

The first payload considering Falcon Heavy for launch services is the Japanese Space Agency’s (JAXA) HTV-X, and upgraded version of a spacecraft the country developed to assist in resupplying the International Space Station (ISS). HTV-X is primarily being designed with an ISS-resupply role still at the forefront, but Russianspaceweb recently reported that JAXA is seriously considering the development of a variant of the robotic spacecraft dedicated to resupplying the Lunar Orbital Platform-Gateway (LOPG; and I truly wish I were joking about both the name and acronym). 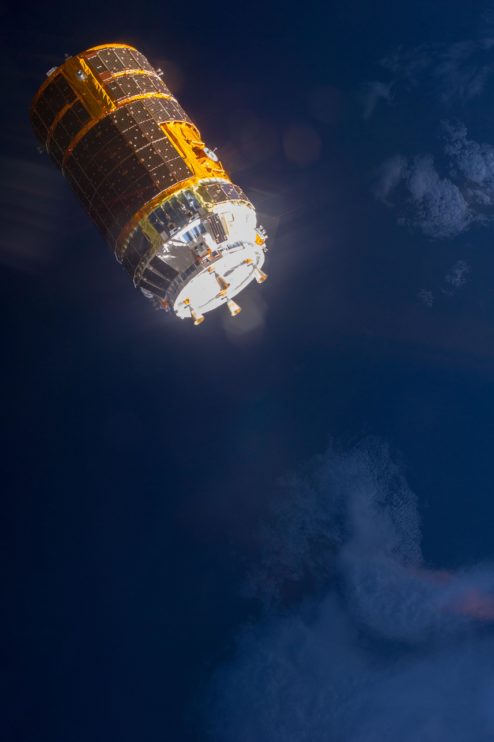 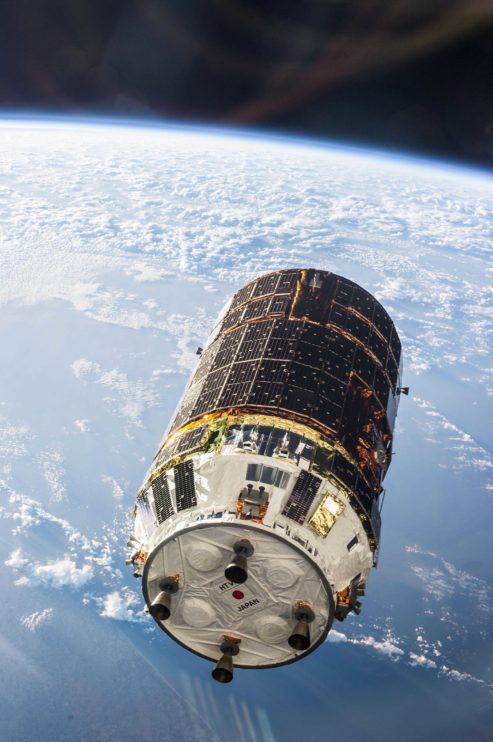 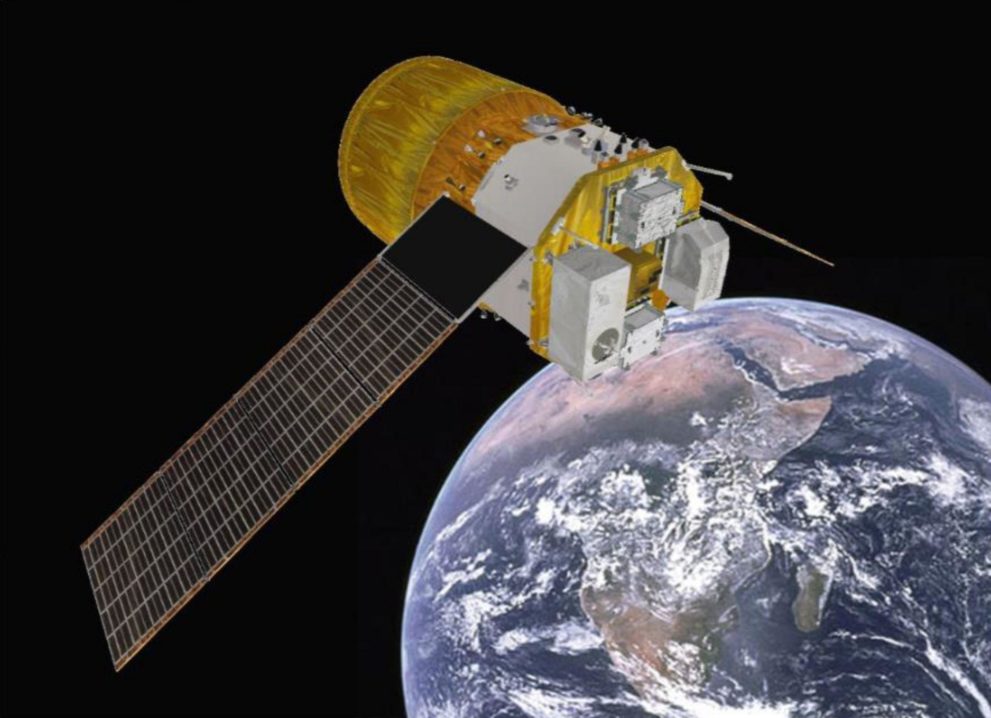 As the name suggests, LOPG is fundamentally a shrunken, upgraded copy of the present-day International Space Station but with its low Earth orbit swapped for an orbit around the Moon. Why, you might ask? It happens that that question is far less sorted at this point than “how”, and there’s a fairly strong argument to be made that NASA is simply attempting to create a low-hanging-fruit destination for the chronically delayed SLS rocket and Orion spacecraft it routinely spends ~20% of its annual budget on. The alternatives to such a crewed orbital outpost are actually landing on the Moon and building a base or dramatically ramping development of foundations needed to enable the first human missions to Mars.

(Numerous renders by Nathan Koga, including the epic one below) pic.twitter.com/j0cr2ze7qG

Regardless of the LOPG’s existential merits, a lot of energy (and money) is currently being funneled into planning and initial hardware development for the lunar station’s various modular segments. JAXA is currently analyzing ways to resupply LOPG and its crew complement with its HTV-X cargo spacecraft, currently targeting its first annual ISS resupply mission by the end of 2021. While JAXA will use its own domestic H-III rocket to launch HTV-X to the ISS, that rocket simply is not powerful enough to place a minimum of ~10,000 kg (22,000 lb) on a trans-lunar insertion (TLI) trajectory. As such, JAXA is examining SpaceX’s Falcon Heavy as a prime (and affordable) option: by recovering both side boosters on SpaceX’s drone ships and sacrificing the rocket’s center core, a 2/3rds-reusable Falcon Heavy should be able to send as much as 20,000 kg to TLI (lunar orbit), according to comments made by CEO Elon Musk. 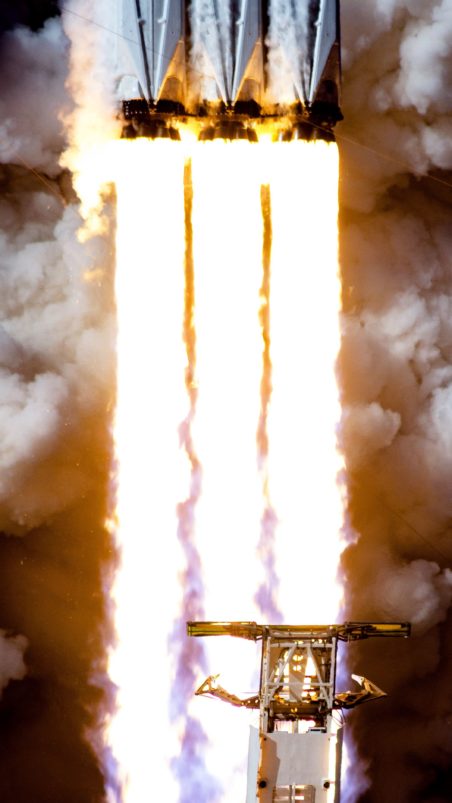 Falcon Heavy booster ice peeling away and vaporizing in the fire of the engines. (Photo: Tom Cross) 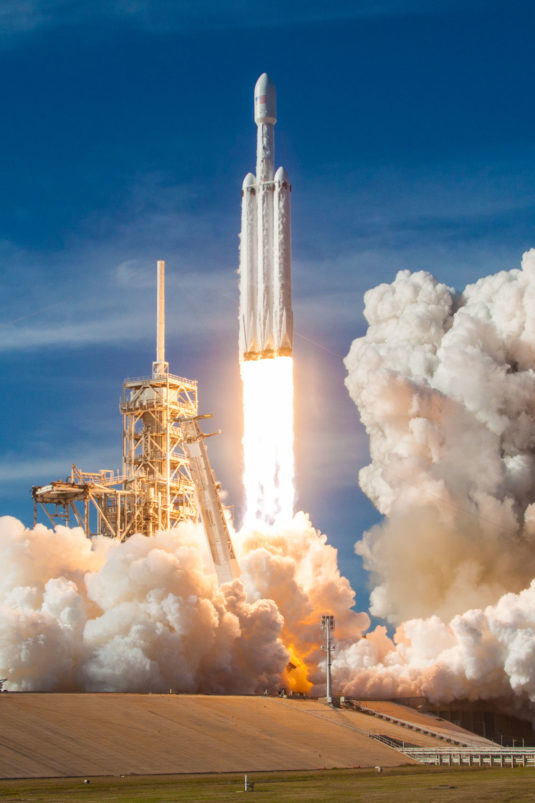 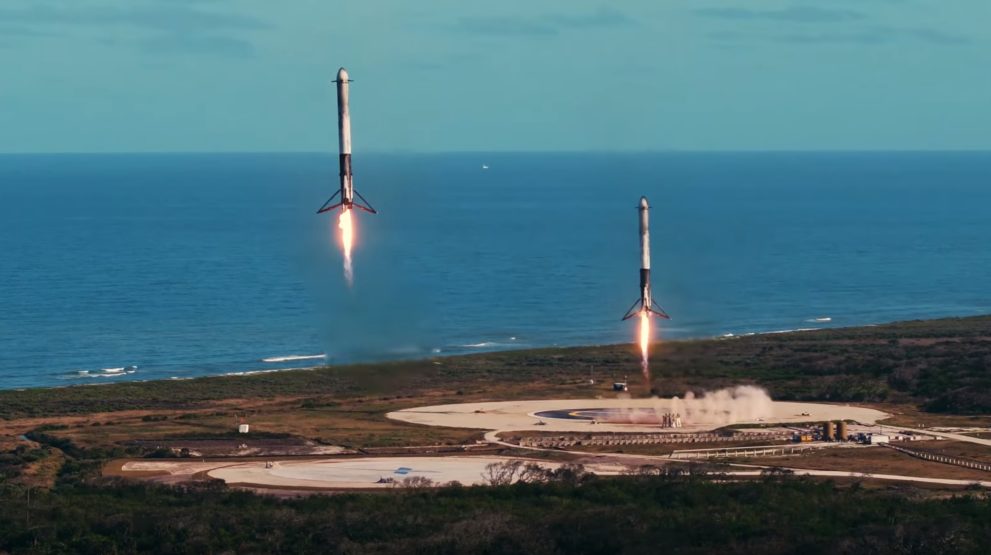 That impressive performance would also be needed for another LOPG payload, this time for ESA’s 5-6 ton European System Providing Refueling Infrastructure and Telecommunications (ESPRIT) lunar station module. That component is unlikely to reach launch readiness before 2024, but ESA is already considering Falcon Heavy (over its own Ariane 6 rocket) in order to save some of the module’s propellant. Weighing 6 metric tons at most, Falcon Heavy could most likely launch ESPRIT while still recovering all three of its booster stages.

Regardless of the outcomes of those rather far-off launch contracts, it’s clear that some sort of market exists for Falcon Heavy and even more clear that its injection of competition into the stagnant and cornered heavy-lift launch segment is being globally welcomed with open arms.