SpaceX’s first Falcon 9 Block 5 booster has returned to Port Canaveral, FL once again after the rocket’s second successful launch, likely the first of countless reuses to come over the next months and years. Of note, B1046.2 (Booster 1046, flight 2) was by all appearances in as good of condition as it was when it lifted off from Pad 40 just three days prior.

While it may be difficult to immediately distinguish between B1046’s second launch and recovery and those of previous, older Falcon 9 boosters, Block 5 is a quite simply an entirely different story. Moreover, the fact that SpaceX went from the major upgrade’s launch debut to first booster reflight in barely three months is an extraordinarily good indication that Block 5’s first flightworthy design (especially the parts not visible to the public) is very close to its engineers’ theoretical intentions.

Falcon 9 B1046’s second recovery also happened to be the quickest yet for SpaceX by a healthy margin, taking just 4.5 days to travel 400 miles back to port, be lifted off drone ship Of Course I Still Love You, have its legs removed, and be loaded horizontally onto SpaceX’s dedicated Cape Canaveral booster transporter. Whether or not the rocket itself is ready for another flight with absolutely zero refurbishing in between, this demonstration of just how quickly SpaceX’s infrastructure can operate indicates that much of the framework needed for truly rapid reuse is already largely in place.

Once SpaceX is confident that Block 5 can be reflown with little more than new fuel added and has lined up multiple payloads for launch in just a few days or weeks, it’s clear that the company will already have the ability to launch (and reuse rockets) so quickly that drone ship availability will become the primary bottleneck. For example, if B1046 could have shipped to one of SpaceX’s launch sites moments after it was loaded on its transporter and prepped for the second launch within 24-48 hours of going horizontal, it’s extremely unlikely that OCISLY could be readied for another booster recovery and towed several hundred miles off the coast in time to catch B1046 after its third launch. 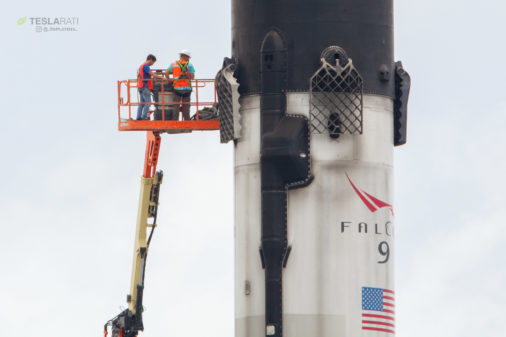 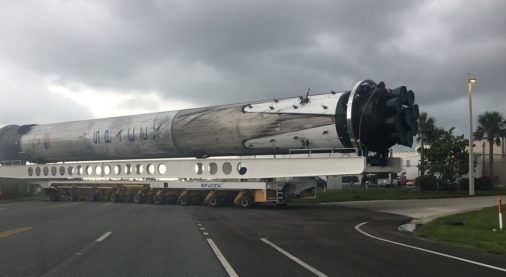 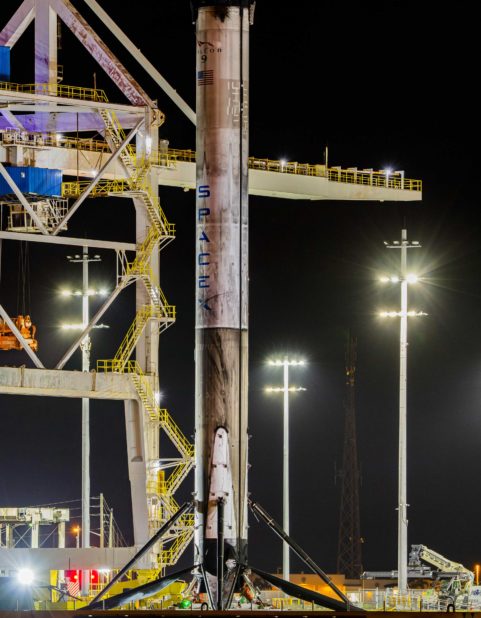 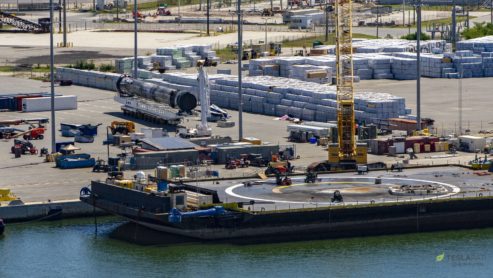 60 hours after docking, B1046 was loaded horizontally onto its transporter. (Tom Cross)

As such, barring the extremely rapid completion of SpaceX’s third drone ship (named A Shortfall of Gravitas), it can be all but guaranteed that SpaceX will need to use its land-based Landing Zone 1 to accomplish CEO Elon Musk’s challenge of launching, landing, and relaunching the same Falcon 9 booster in less than 24 hours sometime before the end of 2019. Even then, it seems likely that SpaceX would either need to dramatically improve the turnaround capabilities of one of its launch sites or conduct those back-to-back launches using both of the company’s two Florida pads (LC-39A and LC-40).

Regardless, the first reuse of a Falcon 9 Block 5 booster unequivocally marks the beginning of a new era for SpaceX and for orbital rocketry worldwide. According to one of SpaceX’s webcast hosts during the second flight of B1046 (for the launch of Telkom 4/Merah Putih), the rocket’s third launch (a first for SpaceX) is already in planning for an unspecified mission later this year. As SpaceX rockets begin to rack up 3, 5, 10, or more launches apiece and the act of reusing Falcon 9s becomes so routine that it bores all but the most ardent followers, you’ll know that SpaceX has essentially succeeded in the first step of its master plan. Next stop: BFR and Mars.