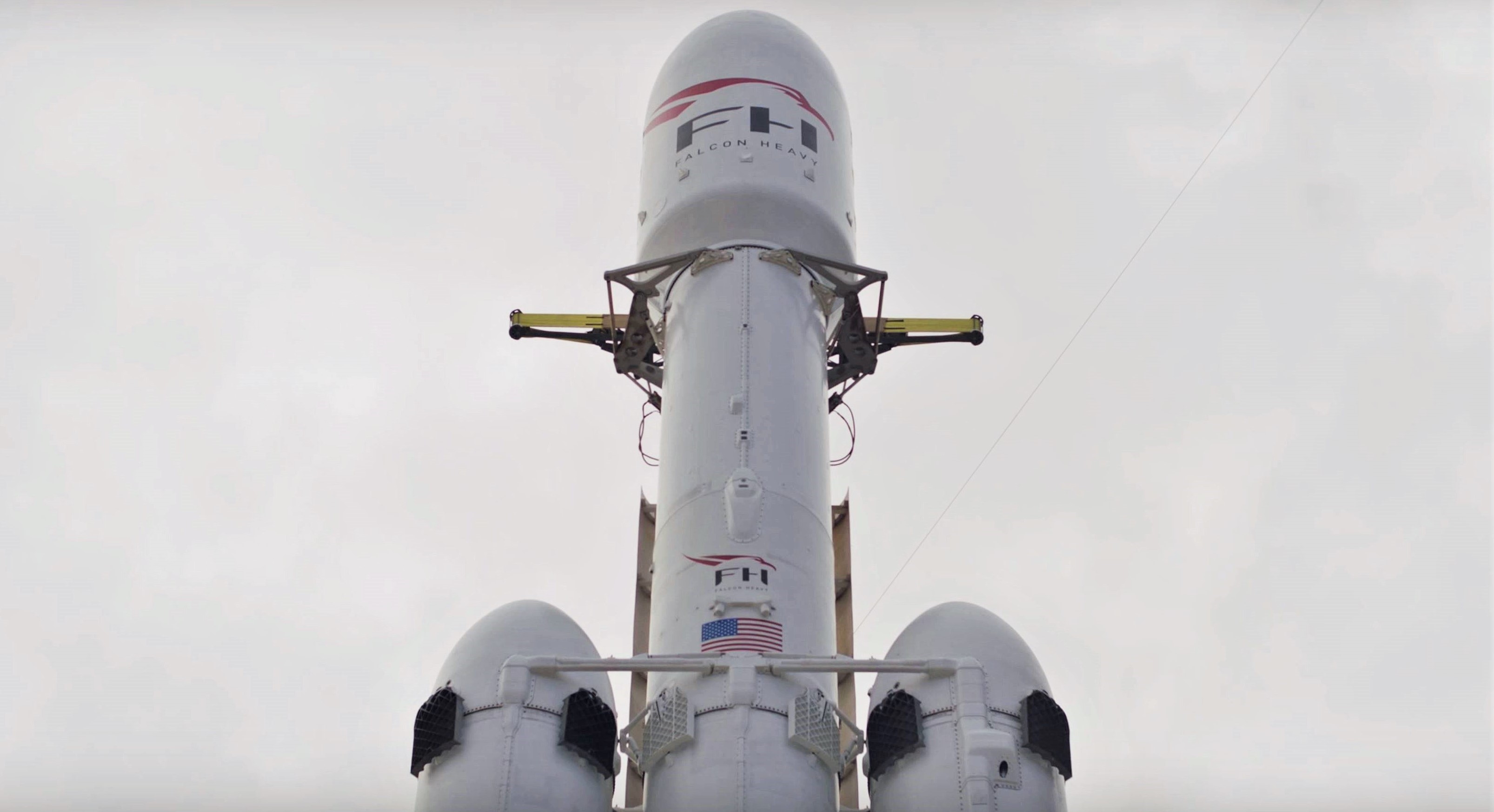 Update: No official comment has been offered but sourced reports indicate that SpaceX’s second Falcon Heavy launch will slip from a target of April 7th into “next week”, April 8-14. The massive rocket’s critical static fire test has also been pushed from April 4th to 5th, allowing additional time for SpaceX engineers and technicians to verify Falcon Heavy’s health. Stay tuned as we get closer to that test ignition and SpaceX releasing an official launch date.

The first Block 5 variant of SpaceX’s Falcon Heavy rocket has rolled out to Launch Pad 39A for an inaugural launch that could occur as early as April 7th. Minor delays, however, are extremely likely for the second Falcon Heavy launch attempt ever, with the most likely dates resting closer to April 8-11.

With an appearance noticeably deviating from Falcon 9 5’s more tuxedo- exterior, Falcon Heavy and its all-new boosters still sport the same polished white skin and some of the black, felt-like thermal protection that helps to make the upgraded boosters so reusable. That reusability will be tested to the extreme as few as two months after launch – assuming all goes well – with the US Air Force’s STP-2 mission, set to reuse both of Falcon Heavy Flight 2’s side boosters, B1052 B1053.

Above all else, it should be noted that the likelihood of Falcon Heavy Flight 2’s actual launch date slipping is not to say that anything at all is technically or operationally wrong with the rocket or ground support equipment (GSE). Rather, it’s simply a dose of pragmatism for a launch date that was originally approved on the range alongside a static fire on March 31st. In other words, SpaceX was anticipating the need for approximately seven days between static fire and launch, a fairly believable target relative to Falcon Heavy’s first launch flow.

Even if SpaceX completes a flawless Falcon Heavy static fire immediately after the 6 pm EDT window opens, this would give company engineers and technicians less than 72 hours to turn the rocket around for launch as soon as 6:36 pm EDT on April 7th. That process involves a huge amount of work, including the actual static fire, safely (removing propellant), returning to Pad 39A’s hangar, installing the payload fairing, ensuring payload health, rolling back out to the pad, and integrating the transporter with the launch mount. Throughout, many checks and double checks are made to ensure that everything is ready for flight.

Safely completing that work in ~72 hours is extremely difficult for Falcon 9, let alone a significantly modified Falcon Heavy preparing for the vehicle’s second launch attempt ever. For reference, excluding a few outlier launches, Falcon 9 Block 5’s mean time between static fire and launch is ~4.7 days, while the mode is 5 days (6/10 launches). Outliers include missions like SSO-A, DM-1, and GPS III SV01, all of which required unique care and caution for various reasons. Chances are good that Falcon Heavy Flight 2 will probably improve upon Flight 1, which took several days to complete a static fire and 13 more days before a launch attempt. Still, the rocket is very unlikely to beat Falcon 9 Block 5’s average time-to-launch.

All in good time

There is probably a 5% chance of Falcon Heavy launching on April 7th even if the static fire happens right on time and shows all systems running in the green. If SpaceX is unable to fit a static fire into the April 4th window, that will likely slip to 0%. Either way, we can expect SpaceX to provide an updated launch window or rough estimate as early as today, especially if the static fire test is successfully completed.

In the meantime, drone ship I Still Love You (OCISLY) – accompanied by a tug boat – is heading nearly 1000 km (620 mi) into the Atlantic Ocean to prepare for the attempted recovery of Falcon Heavy’s center core. In other words, it will likely be the fastest and farther a SpaceX booster has ever traveled while still attempting to land. Just Falcon Heavy’s launch debut, both side boosters will attempt to land back at Landing Zones 1 and 2 (LZ-1 & LZ-2) around 8-10 minutes after liftoff. The 6000-kg (~13,200 lb) Lockheed Martin-built Arabsat 6A satellite will be the rocket’s first commercial payload, likely heading to a high-energy geostationary transfer orbit.