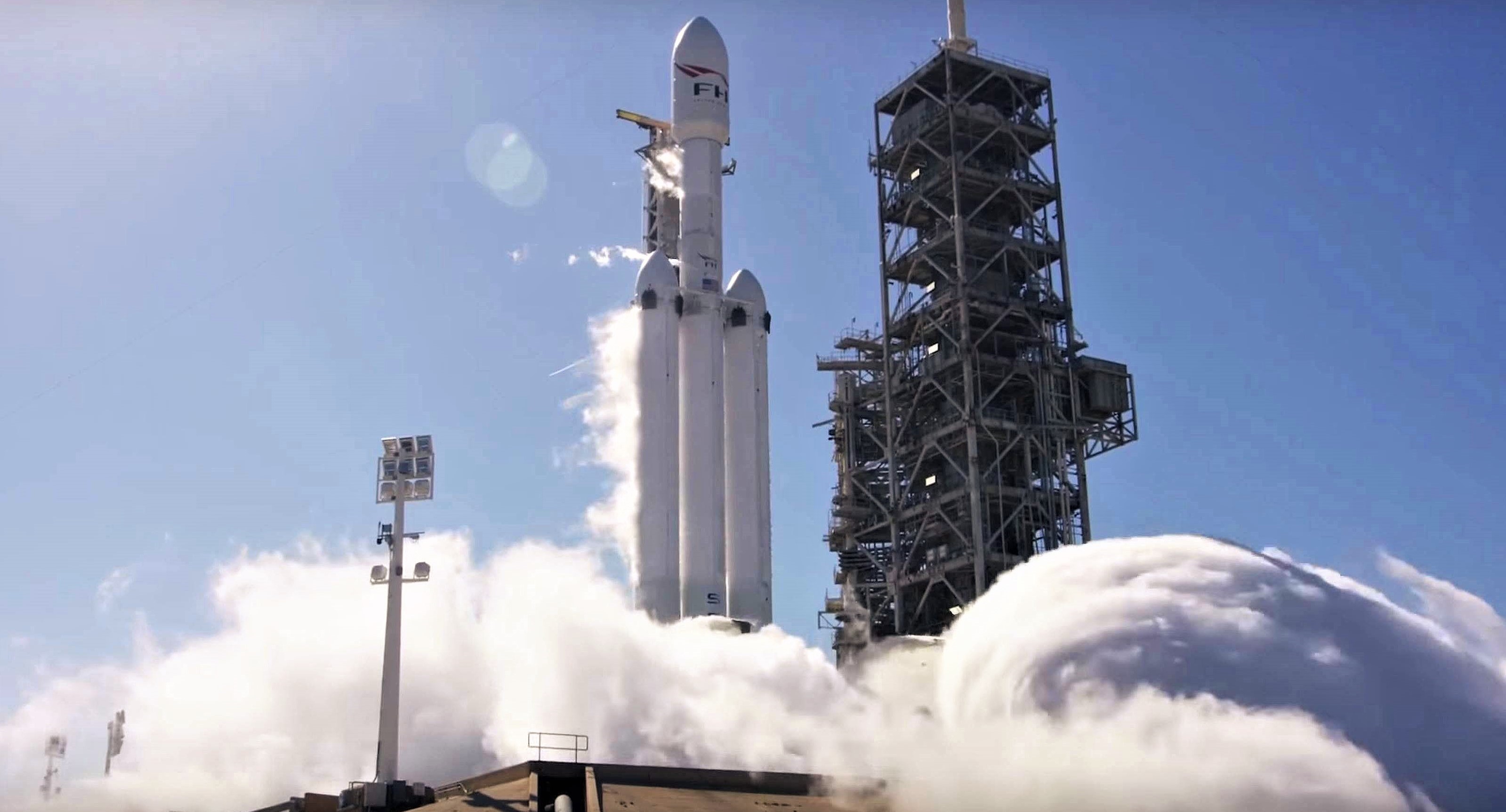 Falcon Heavy ignites all 27 Merlin 1D engines for the first time prior to its inaugural launch, January 2018. (SpaceX)

SpaceX is set to take another stab at the first integrated static fire test of Falcon Heavy Block 5 rocket, a milestone that will open the doors for its commercial launch debut just a handful of days later.

The window for the second Falcon Heavy’s static fire test will open at EDT on Friday, April 5th and lasts until EDT (14:00-23:00 UTC), after which SpaceX engineers will likely spend a minimum of 24-48 hours analyzing the data produced and verifying the rocket’s health. Soon after, the rocket will be brought horizontal and rolled back into Pad 39A’s main hangar, where the payload fairing – containing the Arabsat 6A communications satellite – will be installed atop Falcon Heavy’s second stage before the rocket rolls back out to the pad for launch.

If all goes well during these relatively routine procedures, SpaceX can be expected to announce a date for Falcon Heavy’s second-ever launch, likely no sooner than 4-5 days after the static fire is completed. In other words, a flawless performance tomorrow could permit a launch date as early as April 9-10. Launching fewer than four days after completing static fire testing is rare even for Falcon 9, which has the luxury of far less complexity (and data produced) relative to Falcon Heavy, which has only flown once and will attempt its second launch in a significantly different configuration.

Three months after Falcon Heavy’s February 2018 debut, SpaceX debuted Falcon 9 in its upgraded Block 5 configuration, featuring widespread changes to avionics, software, structures, thermal protection, and even uprated thrust for its Merlin engines. Falcon Heavy Flight 1 was comprised of Block 2 and Block 3 variants of the Falcon 9’s umbrella V1.2 Full Thrust configuration, which debuted in December 2015. Both side boosters – Block 2s – were flight-proven and had previously launched in 2016, while the rocket’s heavily modified center core was effectively a new version of Falcon 9 based on Block 3 hardware.

And we have to all the avionics as well. So we have an upgraded flight computer, engine controllers, a … more advanced inertial measurement system. [Block 5 avionics are] lighter, more advanced, and also more fault-tolerant. So it can withstand a much greater array of faults than the old avionics system. [They’re] better in every way.

Block 5 has improved payload to orbit. Improved redundancy. Improved reliability. It’s really better in every way than Block 4. I’m really proud of the SpaceX team for the design.

Given just how extensive the changes made with Block 5 are, Falcon Heavy Flight 2 is drastically different than its sole predecessor, emphasized by the 13+ months SpaceX has taken to go from Flight 1 to Flight 2. Had SpaceX been able to successfully recover Falcon Heavy’s first center core (B1033) after launch, its quite likely that the company would have attempted to refly the rocket’s three landed boosters a bit sooner than April 2019, but the booster’s failed landing threw a bit of a wrench in the production plan.

After intentionally expending almost a dozen recoverable Block 3 and 4 Falcon 9 boosters in 2017 and 2018, SpaceX’s fleet of flightworthy cores had been reduced to a tiny handful. Interrupting Falcon 9 Block 5’s production ramp would have likely become a bottleneck for 2018’s launch cadence, and may well have contributed to SpaceX falling short from its planned 30 and then 24 launches last year with a still-impressive 21. Building an entirely new Falcon Heavy center core was simply not a priority as SpaceX required all production hands on deck to build enough Block 5 boosters to avoid major launch delays.

As a result, SpaceX delayed the production of the first Falcon Heavy Block 5 center core by ~6 months and ~8 boosters, shipping the rocket – presumed to be B1055 – to McGregor, Texas for static fire acceptance testing in Q4 2018. The center core arrived in Florida in mid-February 2019, following both side cores and a payload fairing.

Ultimately, SpaceX is likely to conduct Falcon Heavy’s first commercial launch with about as much caution as could be observed during the unique launches of SSO-A (the first triple- of a Falcon 9), Crew Dragon DM-1 (stringent NASA oversight), and GPS III SV01 (stringent USAF oversight), as well as Falcon Heavy’s original launch debut. All four missions took anywhere from one to three weeks to go from a successful static fire to launch. Falcon Heavy Flight 2 will likely be similar, although a much faster turnaround is undeniably within the realm of possibility. For Falcon 9 Block 5, SpaceX’s current record stands at three days, achieved twice in ten Block 5 launches.