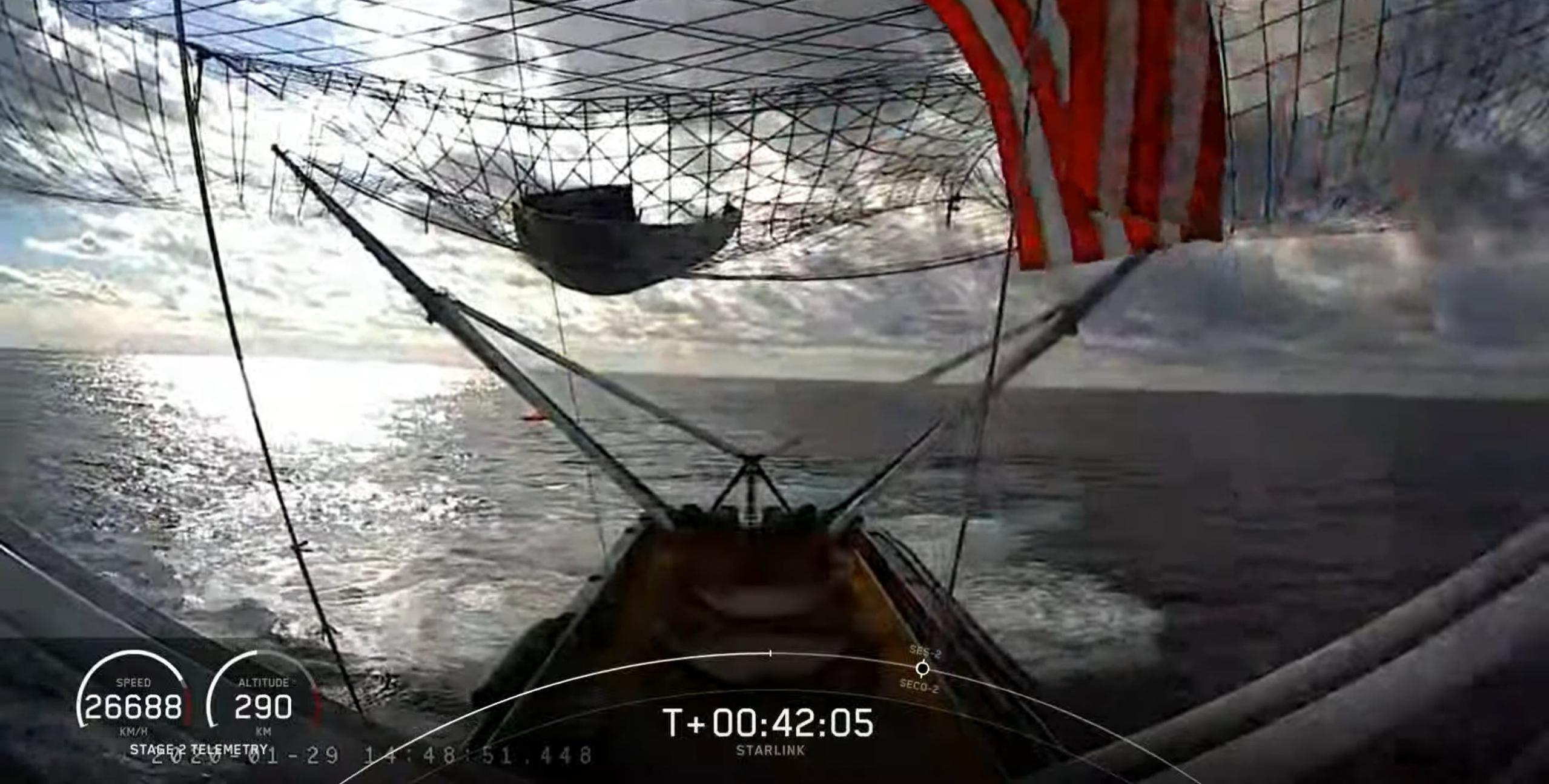 SpaceX just caught its first rocket nosecone in 5 months (and the booster landed, too)

One of SpaceX’s net-outfitted recovery ships has just completed the company’s first successful Falcon 9 nosecone (payload fairing) catch in more than five months, although the ship’s twin was not so lucky.

Known as GO Ms. Tree (formerly Mr. Steven) and GO Ms. Chief, today’s recovery attempt marked the second time ever that both ships simultaneously attempted to catch both halves of a Falcon 9 payload fairing. Outfitted with giant nets, those ships are meant to keep those featherweight fairings – flying with the help of GPS-guided parafoils – out of corrosive saltwater by being in exactly the right place at exactly the right time some 700-1000+ km (430-620+ mi) downrange. Unsurprisingly, consistently catching Falcon fairings has proven to be incredibly challenging — perhaps even more so than recovering Falcon 9 boosters.

As evidence, on today’s attempt – despite both ships being present in almost identical conditions, only one ship – Ms. Tree – managed to catch its assigned fairing half, while Ms. Chief missed her shot. For fairing recovery in general, this is SpaceX’s first successful catch in more than five months and third successful catch ever since attempts first began in early 2018.

Given the mechanics of the feat, it’s not all that surprising that Falcon fairing recovery has proven so exceptionally challenging. First and foremost, Falcon payload fairings are only worth around $6 million total – less than 10% of Falcon 9’s current base price and even less for Falcon Heavy, advertised with a base price of $90M per launch. If, for example, SpaceX ends up spending $100-200 million developing fairing recovery, it will take a bare minimum of 15-30+ flawless recoveries (of both halves, no less) to recoup the company’s investment.

Still, given that SpaceX will need no fewer than 75-190+ dedicated Falcon 9 launches to orbit its entire licensed Starlink constellation, it’s not surprising that the company has deemed the investment and major challenges worth it. While the payload fairing only represents 10% of the cost of a new Falcon 9, accounting for the booster reuse that is more or less guaranteed on all Starlink missions means that the fairing could actually represent more like 30%+ of the cost to SpaceX for each internal Starlink launch.

Ultimately, even on the low end of Starlink’s required Falcon 9 launches, recovering and reusing payload fairings could save SpaceX hundreds of millions of dollars. Not only that, reliable fairing recovery would mean that SpaceX can close the recovery loop on both Falcon 9 boosters and fairings, representing some 75-80% of the rocket’s total cost. In other words, recovering fairings could allow SpaceX to lower the cost of launch to something like $15 or $20M for each Starlink mission — simply inconceivable and definitely unbeatable for more than 15 metric tons (33,000 lb) to low Earth orbit (LEO).

Meanwhile, some 35 minutes before Ms. Tree caught her third Falcon fairing, Falcon 9 booster B1051 nailed its third drone ship landing in 10 months, setting the rocket up for a fourth launch and landing sometime in the near future.

A little over an hour after liftoff, Falcon 9’s second stage spun itself up like a propeller and released the fourth batch of 60 Starlink satellites, completing the company’s third flawless launch of 2020 and taking SpaceX a step towards providing Starlink internet to customers around the world.

SpaceX just caught its first rocket nosecone in 5 months (and the booster landed, too)