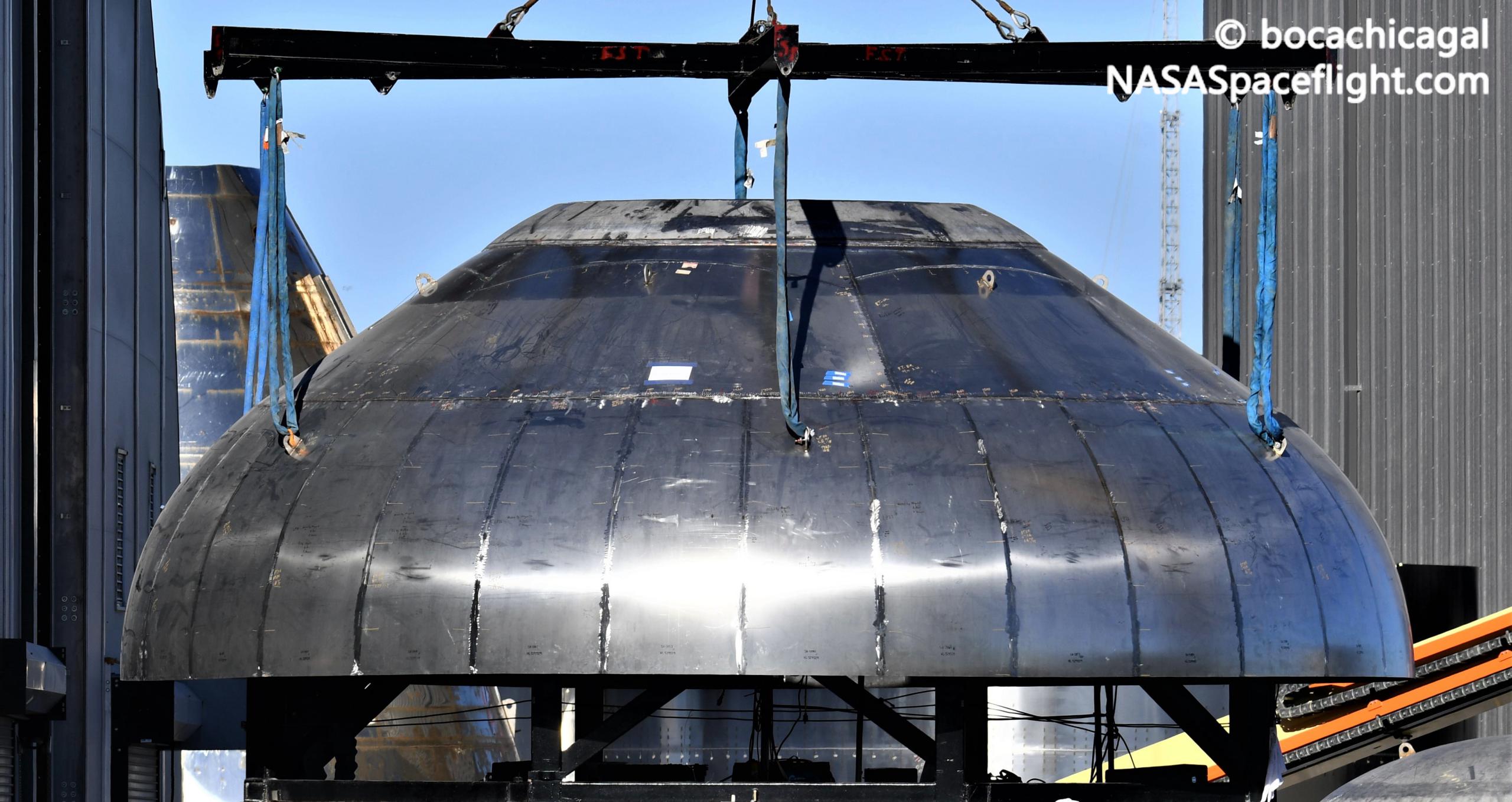 For the most part, SpaceX has learned from trial and error and developed a decent stainless steel rocket manufacturing process by building a dozen Starship prototypes over the last ~12 months, ranging from a lone nosecone tip to stout test tanks and Starship SN8, which launched to 12.5 km (~7.8 mi) earlier this month. Practically identical below the nose, Super Heavy directly benefits from that maturity and is more or less an extended Starship tank section with more engines and bigger legs.

In many ways, Super Heavy can be much simpler than Starship, as a suborbital booster has no need for header tanks, flaps, or a nosecone, and can be much stronger and heavier in all aspects. However, carrying three or more times as propellant as Starship (and carrying Starship itself), Super Heavy also needs to be stronger. All those changes – requiring new design work and new fabrication – take time. In a great sign that most of that work is complete, some of that custom hardware needed to strengthen and power Super Heavy has begun to arrive over the last several weeks.

SpaceX began stacking the first Super Heavy booster (BN1) on November 8th and appears to have more or less paused integration operations after joining eight rings. Production continued apace, however, and no less than five ring sections destined for Super Heavy appeared over the next several weeks. Why assembly slowed down is unclear but it’s reasonable to assume that SpaceX was trying to keep its focus primarily on Starship SN8’s launch debut and the preparation of several other full-scale ships, where early work on Super Heavy could ultimately be for naught if Starship flight tests uncover major design flaws.

On December 17th, one of the parts unique to Super Heavy unexpectedly appeared in SpaceX’s South Texas shipyard, labeled “B1 FWD PIPE DOME”. The dome was quickly sleeved with a stack of three steel rings with labels confirming that the assembly was Super Heavy BN1’s common tank dome – “common” because it’s shared by both booster propellant tanks. The new dome is unique to all previous Starship domes, featuring a smaller, more reinforced cutout – likely because Super Heavy doesn’t need header tanks.

Unlike Starship common domes, which place a spherical methane header tank at the bottom, Super Heavy’s common dome will have a transfer tube welded directly to its nozzle-like opening. As it turns out, what could be the first Super Heavy methane transfer tube was delivered to Boca Chica late last month.

Unlike Starship transfer tubes, the new plumbing appeared to have a much wider diameter and was delivered in four sections, meshing well with the fact that Super Heavy tanks are roughly twice as tall as Starship’s. Able to support as many as 28 Raptors compared to Starship’s 6, Super Heavy transfer tubes will also need to pump more than five times as much methane per second at full thrust, which could explain the larger diameter.

Finally and perhaps most significantly, aerial photos from RGV Photography appeared to capture the first glimpse of what might be the hardest custom part required by Super Heavy – a thrust structure designed to support up to 28 Raptor engines. On December 10th, casually sitting between Starship Mk1’s remains (on the white concrete mount) and a tent, a flat ring with clear eightfold symmetry and a donut-like cutout large enough to fit a Starship thrust puck with room to spare was easily visible.

The hexagonal symmetry was the main giveaway, matching comments from CEO Elon Musk that Super Heavy’s thrust structure will feature a central ring of eight engines surrounded by an outer ring of up to 20 more Raptors. Assuming the first Super Heavy booster only flies with a few Raptor engines, that sole eight-engine ‘puck’ may be all that SpaceX needs to complete BN1.