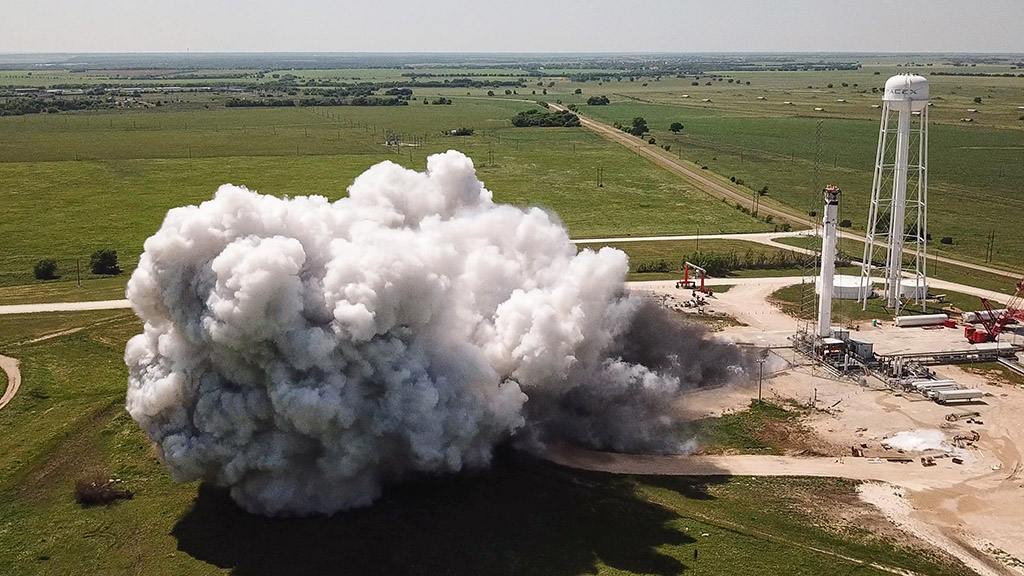 The SpaceX Falcon 9 booster that will support Crew Dragon's first operational astronaut mission is pictured during a static fire test at the company's development facility in McGregor, Texas. (SpaceX)

While the world’s attention is focused on the return of orbital human spaceflight from US soil after a nearly decade long absence with the upcoming May 27th Crew Dragon Demo-2 mission, SpaceX is simultaneously preparing for the first Crew Dragon operational mission certified by NASA, dubbed Crew-1, slated to occur later this year.

On Friday, April 24th, SpaceX treated its Twitter followers to some rare imagery of static fire testing completed at the company’s development facility in McGregor, Texas. The company spotlighted a fresh-from-the-factory Falcon 9 booster and Falcon 9 second stage Merlin Vaccum (MVac) engine intended for the Crew-1 mission. Crew-1, the follow-up mission to May’s Demo-2 mission and SpaceX’s first operational human spaceflight mission for NASA, will propel a crew of three NASA astronauts and one JAXA astronaut in a Crew Dragon capsule to the International Space Station.

SpaceX also provided its followers with a view of the pristine second stage MVac engine of the Crew-1 mission before it was sent to Texas for testing. The one-hundredth production MVac engine is seen inside of SpaceX’s manufacturing facility located in Hawthorne, CA before being prepared for shipment. The second stage MVac engine is the only piece of Falcon 9 hardware that SpaceX does not actively recover and reuse, unlike the first-stage booster and protective payload fairing nosecone.

Part of the process

A static fire test is a typical occurrence before shipping the booster and second stage to Florida for payload integration and launch. The static fire process involves holding down the booster and igniting the engines to run for a full-duration firing. A similar test is also performed on with the second stage MVac engine. These test-fires are performed at the Mcgregor facility to proof the vehicle and check for any inconsistencies or off-nominal test readings that may occur before shipping to the vehicle to the launch site. Following the test-fire, the entire vehicle is inspected, cleaned, and prepared for shipment.

A test-fire in Mcgregor is not the last time the engines will be put through the paces before launch. Typically a week or so before the scheduled launch date, the Falcon 9 booster is transported to the launch pad. There, the booster is fully fueled with propellant while securely held to the launch mount. All nine Merlin-1D engines are once again ignited briefly (anywhere between 6 – 12 seconds) to test the propellant load process and collect engine-firing measurements such as temperature and pressure.

Although the Crew-1 mission is tentatively on the books for later this year, SpaceX and the Crew Dragon capsule have yet to achieve NASA certification to begin operational missions to and from the International Space Station. The second orbital demonstration flight of the Crew Dragon capsule (Demo-2) will serve as the final end-to-end test of SpaceX’s crew transportation system.

However, SpaceX still faces a few obstacles before achieving a full go-ahead by NASA for the launch of Demo-2. As reported by SpaceNews.com NASA’s Aerospace Safety Advisory Panel (ASAP) met via teleconference on Thursday, April 23rd for a routine quarterly briefing. In that meeting, it was briefly discussed that there are still a few “technical items” that remain to be cleared by NASA before the launch of the Demo-2 mission.

Although not specified in the briefing – and likely to be followed up on during “part 2” of the ASAP meeting to be held in early May – those items likely refer to wrapping up the joint investigation of a recent in-flight engine failure of a Falcon 9 Merlin-1D engine and one more qualifying drop-test of the Crew Dragon Mark 3 parachutes. SpaceX, however, shows no plans letting formalities stop the preparation to support future astronaut missions.