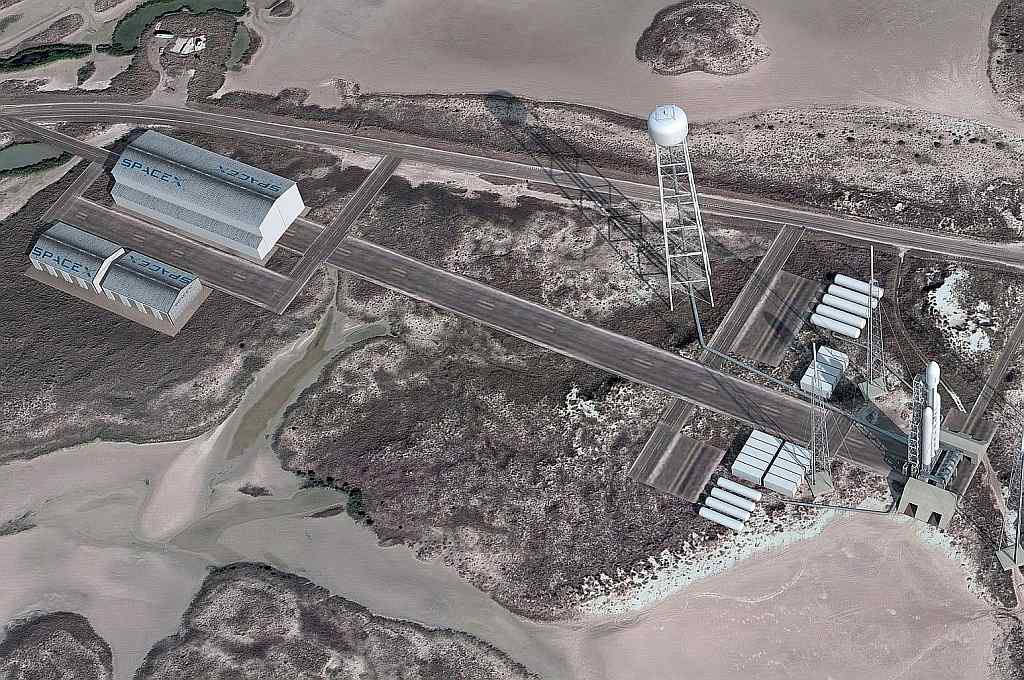 SpaceX could begin testing its Mars rocket in Texas by late 2018, early 2019

On the heels of a successful wet dress rehearsal for Falcon Heavy, SpaceX’s President and COO Gwynne Shotwell spoke briefly about SpaceX for an aerospace conference located at Texas’ Academy of Medicine, Engineering & Science. Ars Technica’s senior spaceflight editor Eric Berger was in attendance and provided a rough outline of live tweets during the first group of presentations.

While the phrasing cannot provide absolute confirmation, Berger summarized a statement by Shotwell suggesting that SpaceX’s Boca Chica, Texas launch site, currently in the early stages of construction, could be ready to host “vehicle tests” as soon as late 2018, early 2019. At this point in time, based on comments from Shotwell and CEO Elon Musk, it can be reasonably assumed that SpaceX’s Texas launch facilities will be dedicated mainly to the company’s interplanetary colonization efforts, and will probably be tailored to support the testing and eventual launches of BFR/BFS.

Some news from Shotwell: Brownsville launch site ready for vehicle tests in late 2018, early 2019. Move to launch site after that.

After nine months of earnest construction and rehabilitation, SpaceX’s LC-40 pad was recently reactivated and has since supported two launches without any major hitches. At the same time, LC-39A in flux in order to support launches of SpaceX’s new Falcon Heavy rocket, the size of which required some concomitant upgrades to multiple ground systems. With both of those major tasks now effectively complete, SpaceX’s pad construction team is free to either refocus their efforts towards Boca Chica. Over the past several months, Boca Chica has seen a gradual but consistent level of development, mainly by way of unaffiliated SpaceX contractors. These changes have been dutifully tracked over the last several years on NASASpaceflight.com forums by a handful of friendly local residents interested in the changes coming to Boca Chica and Brownsville, Texas, a nearby town. 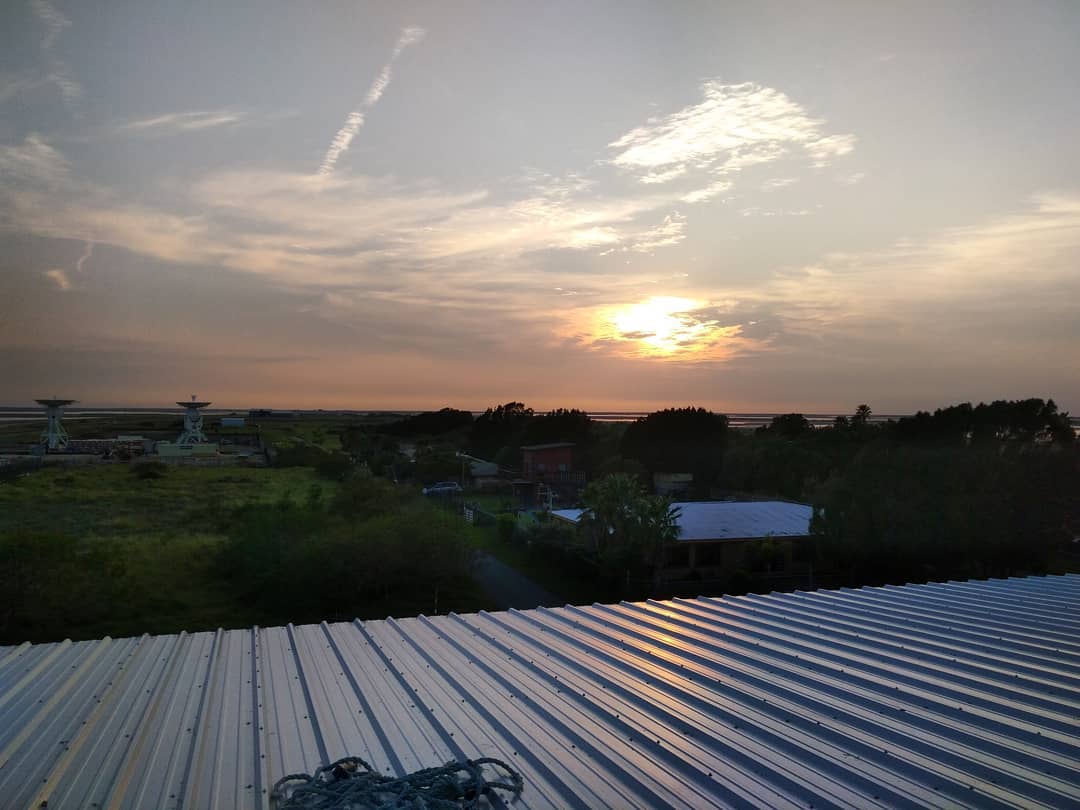 Most significantly, the last several months have seen three major developments. First and most prominently, a permanent facility called STARGATE externally appears complete and its two large radio communication dishes have been installed nearby. The STARGATE facility is a public-private partnership between the University of Texas at Brownsville (now part of University of Texas Rio Grande Valley) and SpaceX, with the academic components focusing on research that SpaceX undoubtedly has interest in: improved orbital spacecraft tracking and communications. Operationally, SpaceX will use the facilities to communicate with and operate its Crew Dragon spacecraft during launches, set to begin with an uncrewed demonstration mission as early as August 2018.

Second, an absolutely massive trolley crane appeared on SpaceX’s land and was eventually housed in an apparently purpose-built shed. The crane dwarfs anything currently used at SpaceX’s launch facilities and is almost certainly a custom-ordered piece of equipment, and thus would be both expensive and explicitly purposeful. What that purpose might be is currently unknown, but it is entirely plausible that the crane is intended to support initial testing (or even limited manufacturing) of SpaceX’s first BFS prototype rockets. This speculation has now been strengthened by Shotwell’s January 11 2018 comment on potential “vehicle tests” occurring at the site within a year or so, and also meshes with a presentation she gave in October 2017 at MIT. It also fits with Elon Musk’s 2017 IAC comments that BFR construction tooling and facilities were respectively already ordered and under construction. 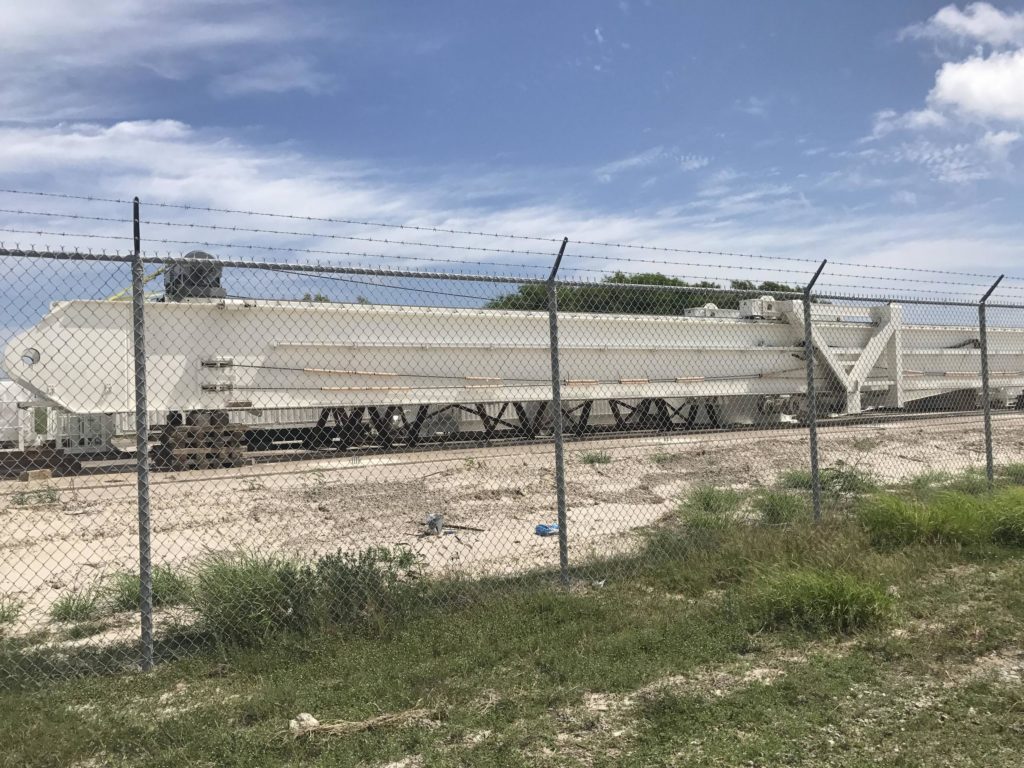 The boom of the giant crane seen in late 2017, parked at SpaceX’s Boca Chica facilities. (Reddit /u/ ticklestuff)

Third and last, the aforementioned SpaceX-following locals observed the early stages of a solar power install beginning on some of SpaceX’s Boca Chica land in late 2017, and also noted that at least some of its contractors were part of Tesla Solar. Plans and permits for solar power were acknowledged as far back as 2014, although at that point the contractor was Solar City (now a part of Tesla). A handful of months later, NASASpaceflight user and all-around awesome guy Nomadd has installed a webcam on a tall pole with a wonderful view of both the solar installation (now nearly completed) and STARGATE. The acre of solar panels can be expected to produce as much as half a megawatt (MW) at peak sun, likely more than enough to offset a considerable amount of the facilities’ electricity usage even after it begins to be see serious use. 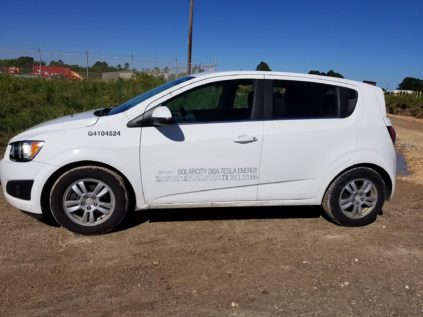 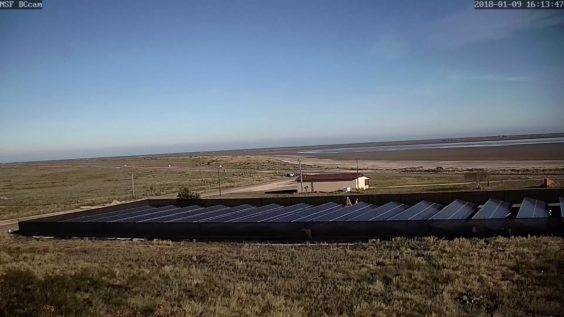 As of last week, the solar installation appears to be nearly complete. (NSF /u/ Nomadd)

Originally announced as an additional Falcon launch facility in 2014, Boca Chica has remained relatively dormant over the last three years, and it is truly exciting to see activity ramping up. There are admittedly significant barriers that will prevent SpaceX from effortlessly repurposing its Boca Chica pad for BFR, a much larger rocket. If SpaceX intends to do that, they will almost certainly need to pass a significantly updated FAA environmental impact review and account for any remediations that might be required. Still, that is a small ask for for Brownsville’s local government and Texas as a whole, both of which have clearly enjoyed and begun to benefit from SpaceX’s presence in the otherwise unknown area. SpaceX is unlikely to give up on Boca Chica in the near term, so long as Ms. Shotwell maintains her belief that it is effectively the perfect location for BFR launches.

Overall, Shotwell’s comments over the last several months and today in particular are increasingly encouraging, and things are likely to only speed up as 2018 progresses, allowing SpaceX to focus more and more of its expertise on BFR, BFS, and its South Texas testing and launch facilities.

Full disclosure: As Shotwell did not specify which vehicle or vehicles could be expected to begin testing in 2018/2019, it is possible that Falcon 9, not BFR, was the statement’s target. This article should be taken with a grain of salt, as it is educated speculation based upon public information from SpaceX executives and Texas contractors. Teslarati reached out to SpaceX for additional information, but the company was unable to comment further on Shotwell’s presentation at the moment.

SpaceX could begin testing its Mars rocket in Texas by late 2018, early 2019