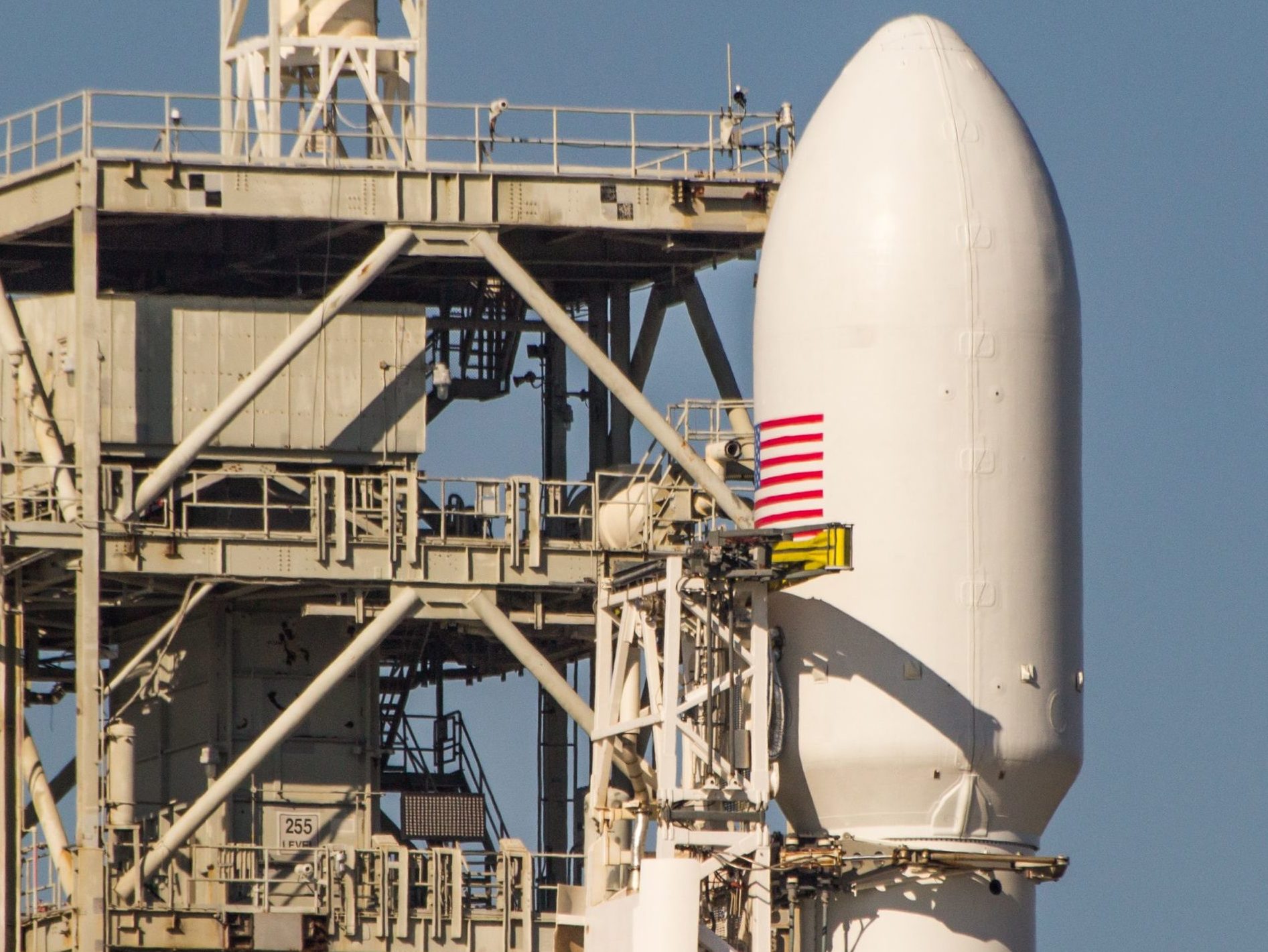 NASA invited media to a very special opportunity to go inside their Clean Room at the Kennedy Space Center in Florida. This is where satellites are meticulously prepared in the weeks leading up to their scheduled launch date. Of course, I was there, I wouldn’t miss this for the world!

The Press Accreditation Office is an unassuming building that’s located off the beaten path and a few miles outside KSC gates. It’s a convenient location for a large gathering of people that need to avoid traffic congestion. The building itself looks like an abandoned gas station without pumps, mostly vacant inside, except for a couple of tables and bathrooms. There’s really nothing inside – not even a coffee maker (I’m shocked by this). It serves its purpose perfectly though – get media personnel checked in and loaded onto a bus, quickly.

I was anxious to go inside NASA’s Clean Room and catch a glimpse of SpaceX’s upcoming payload.

The payload and our Solar System’s latest remote camera is called ‘TESS’ – The Transiting Exoplanet Survey Satellite. Technically speaking, it is a NASA Astrophysics Explorer mission designed to perform an all-sky survey to detect transiting planets around the closest brightest stars by monitoring their brightness with high precision. Simply put, it’s a satellite containing four insanely great cameras that will photograph the sky and detect planets around nearby stars!

After passing through the usual K-9 unit sniff test, I boarded a NASA bus and was taken through parts of the Kennedy Space Center that you don’t ever see while on the standard tour. We were traveling through heavily wooded back-of-the-property roads and for good reason. We were going to NASA’s Payload Hazardous Servicing Facility.

We were first escorted into the conference room, which is separated from the building containing the Clean Room. A bunch of swag-bags for press were being handed out, one for each of us, as we walked inside. The room was furnished with a large board-table with a huge flat-screen TV attached to the wall at the head of the table. Hanging on the walls were stunning high-resolution black and white prints of planets and moons, the same ones you’ve seen on the internet, evenly separated and precisely level. TESS mission experts were sitting at the table waiting for us to take our seats. As I sat down, I noticed some hardware on the table that we would soon be able to get our hands on. 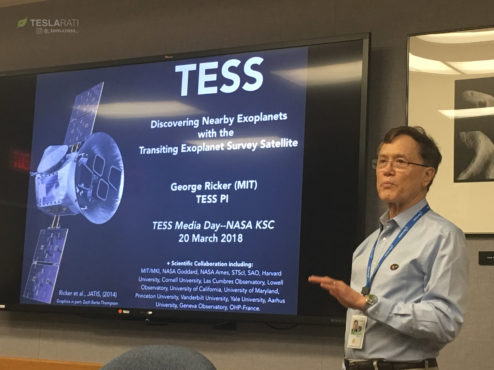 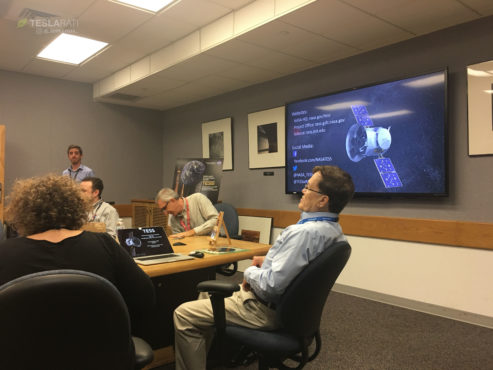 TESS experts waiting for us to take our seats before starting the lecture. (Photo/TomCross)

MIT’s George Ricker – TESS’ Principal Investigator promptly started his lecture about the details of the satellite and the mission. This would be my first MIT-level lecture and I was absolutely captivated because it was organized and explained logically. George is an excellent teacher, very articulate in his descriptions of everything and had the help of great animations on the screen.

You know that scene in Interstellar where the main characters stumble into ‘NASA’ and they’re given a lecture on the ‘anomaly’ that was discovered in our solar system? That’s the scene here, except this was reality – we are discovering distant planets around other Sun’s.

There are a ton of impressive features of TESS that I can hardly pick a favorite to tell you about. It has four custom-made high-resolution cameras. The CCD’s (camera sensors) are the largest and most perfect sensors that have ever been developed for a spacecraft. The experts, luckily, had one extra sensor to pass around for us to get a hands-off, drool-worthy close-up look. If you know about full frame 35mm sensors – get a load of this one!

Next up was one of the extra lens-elements that are inside each of the four cameras. I keep a lens cloth in my pocket so once I received it I gave it a soft wipe-down and captured a few iPhone pictures of the different reflections in the lens coating. I’m still hoping for an answer about what this lens is coated with but I may never find out, though. But isn’t it intriguing? 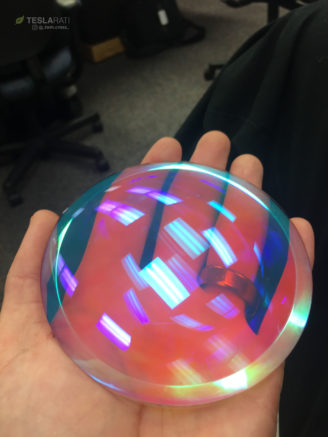 I’m holding in my hand a lens-element that is inside one of the 4 cameras on TESS. Notice the red color of the coating. (Photo/TomCross) 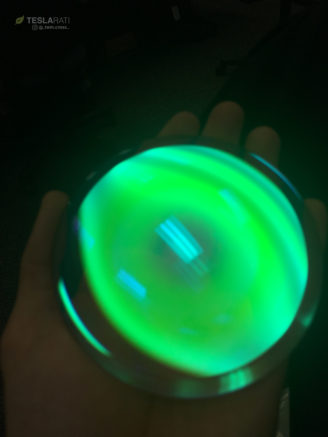 The same side of the lens, tilted slightly produces a green color on the coating. (Photo/TomCross) 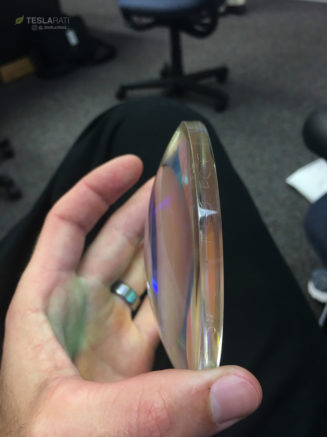 Lens held from the side, you can see the serial number etched on the edge and the coating seems clear. (Photo/TomCross) 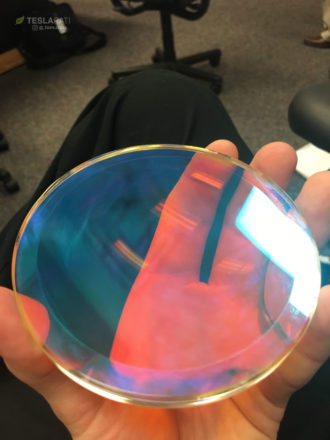 The backside of the lens, has a red-yellow hue. (Photo/TomCross) 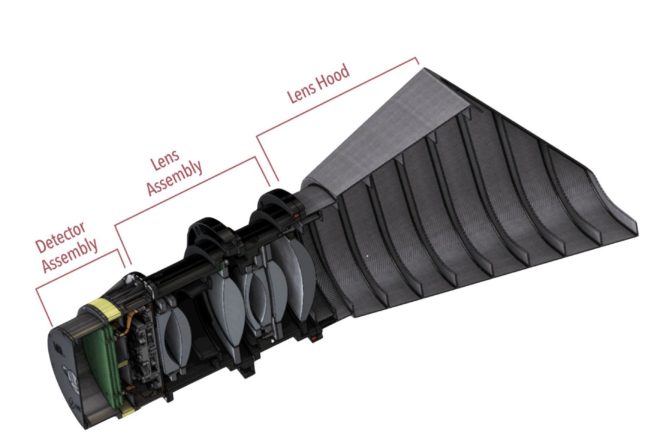 Perhaps my favorite part of the lecture was learning about how they’re getting this satellite into orbit. This is where orbital dynamics becomes a bit like mixed martial arts with Newton’s laws of motion.

TESS is launching aboard a SpaceX Falcon 9 with a very slim window of opportunity – about 1 minute per day because it has to be perfectly in sync with the orbit of our Moon. As George Ricker explained, “This is a type of orbit that is normally unstable. If you aren’t careful about the way you launch into this orbit, you’re almost guaranteed to hit the Moon within four years. So, there’s a delicate balance staying in this orbit and there’s been a lot of effort that has gone into figuring it out. If you actually manage to do this, it’s stable for decades!”

After transporting into space from Cape Canaveral, via a SpaceX Falcon 9 rocket, the satellite is going to orbit Earth three times, and during each of its closest approaches, the satellite’s hydrazine propulsion system is going to propel it faster, essentially pumping the orbit farther out until it reaches the distance of the Moon. They timed this approach perfectly so that TESS does a ‘lunar flyby’ that will swoop beneath the Moon and use its gravity to speed-up the spacecraft and change its inclination from an East to West orbit to a new North to South orbit the will travel above and below Earth and Moon.

The reason this orbit is so elegantly chosen is that there are 300-hours of unbroken observations for photography, almost non-existent Earth-Moon light pollution. The lens hoods, also, don’t have to deal with much light or toxic radiation levels that will often destroy electronics, thus being able to remain in this orbit for several decades without any help. Absolutely awesome.

So, let’s go see TESS in the clean room. 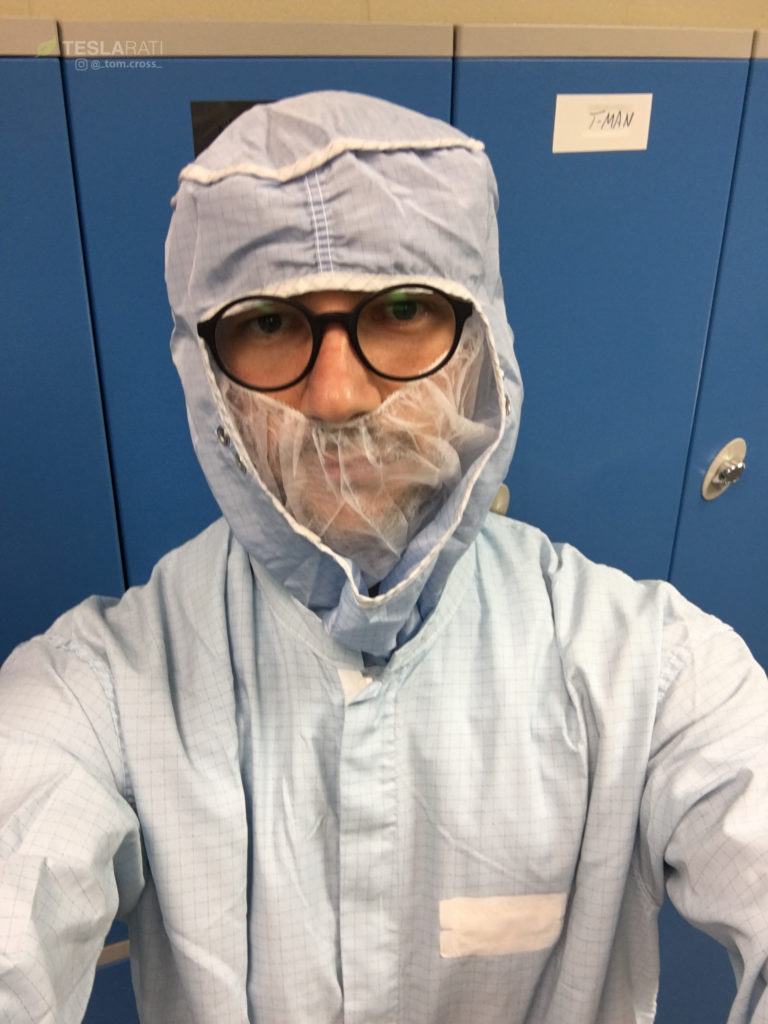 I was transported to a very tall building and put into a small group to get dressed into bunny-suits before entering the high-bay, Clean Room. They take ‘clean’ seriously. Before stepping into the dressing room, I was escorted to a shoe scrubbing machine that had large scrubby-wheels and a vacuum to capture the particles. Then, to another device that automatically put booties on my shoes.

As I walked into the clean room, there was a sticky doormat that grabbed any particles off my booties that I picked up on the way in. I was quickly fitted with a bunny suit “You look like a large, here you go,” said a facility employee while handing me a sealed bag with a clean suit inside. We were shown how to put the suit on. Then, we went over to the glove dispensary to be sized. I noticed that their gloves were incorrectly labeled S, M, and L, according to NASA lore. I asked the employees, “Do you know about the issue this caused with the condom sizes astronauts chose?” They did not. So I was able to teach the workers a fun-fact about astronauts.

See, astronauts have egos, all of them contain the ‘Right Stuff’ but not all of them wear the same sized condoms for their spacesuit urine bags. All astronauts chose ‘Large’, not wanting to hurt their egos. Sometimes their urine condoms leaked into their spacesuit so NASA came up with a brilliant plan: Change the names of the condoms from Small, Medium, and Large to Large, Huge, and Gigantic so that all astronauts chose their appropriate sizes. It worked! But, in this case, the gloves were not labeled this way. Of course, I asked for Large. The room burst into laughter.

An employee handed me an alcohol-soaked microfiber cloth and told me to wipe down my gear perfectly before going to the next cleaning-station. This was followed by a visit to an ‘Air Shower’. It’s literally what it sounds like. There’s a small rectangular-shaped room with nozzles on the ceiling and walls that eject high-powered air all over our body. Vents in the floor sucked particles through a filter. After this final cleanse, we were checked with a blacklight … ok, just kidding. After the air shower we were granted access to the room that TESS was located: NASA’s high-bay!

The room was absolutely drenched in disorienting orange sodium lighting – a nightmare to deal with for photography and white balance but TESS was in its own protected E.T. style clean area beneath bright fluorescent lights.

In the limited time available, we were able to interview satellite experts and take as many photos as we could while technicians worked on the satellite. I love hardware images, so I set up my tripod and used my Miops Mobile remote to photograph detailed close-ups of the intricate components. 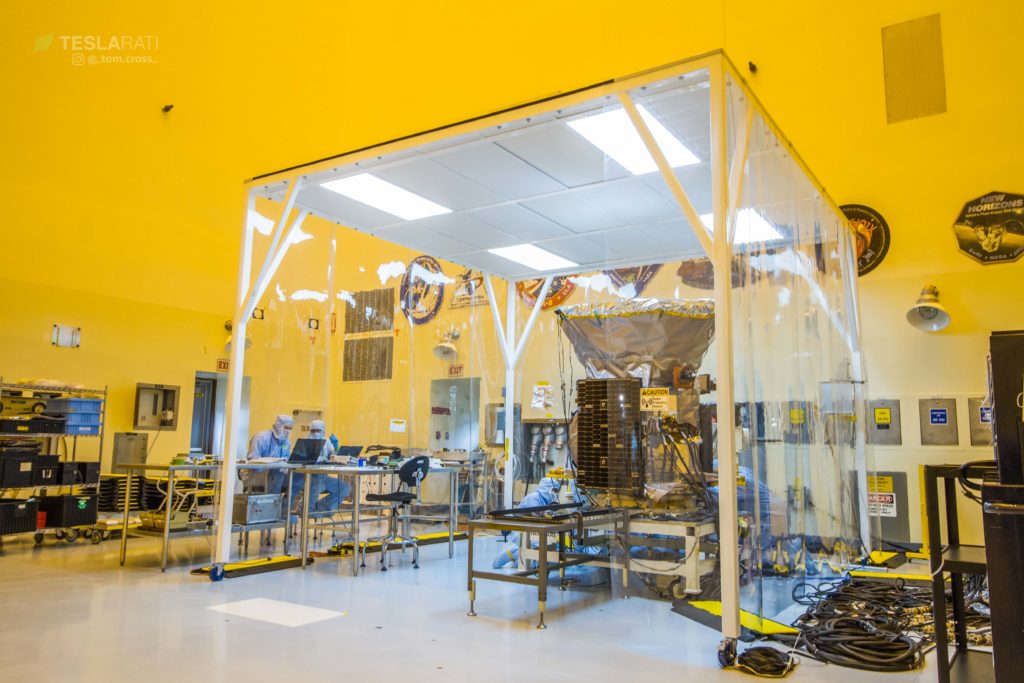 Wide angle image of the high-bay, TESS inside its own clean-room. (Photo/TomCross)

I was politely warned to not take any photographs of the hardware surrounding the satellite and keep my lens pointed only at the satellite in order to not accidentally capture something I’m not supposed to. I was very respectful and got some incredible images of things you typically will never see unless you worked on it yourself.

The spacecraft itself is quite small, there’ll be plenty of room remaining in the Falcon 9 fairing. 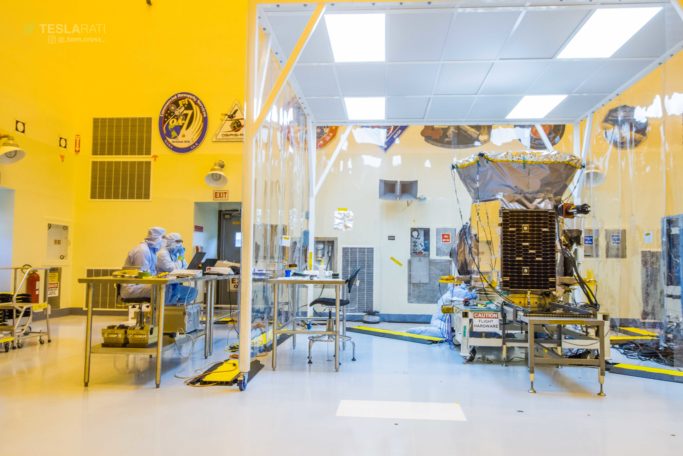 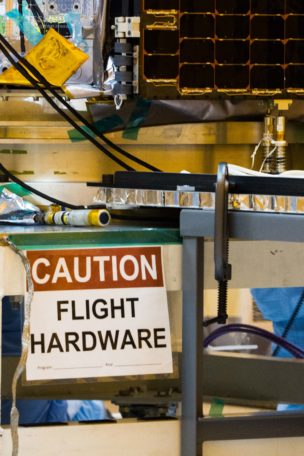 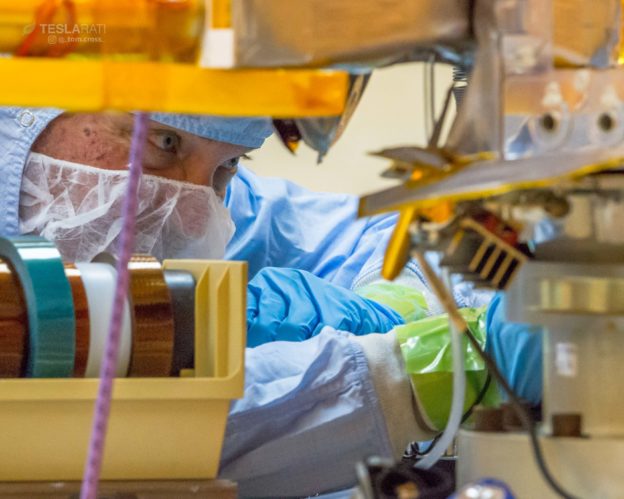 An Engineering working on TESS. (Photo/TomCross) 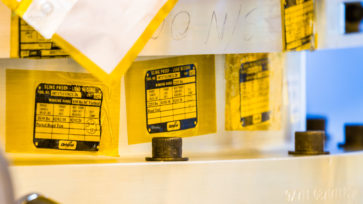 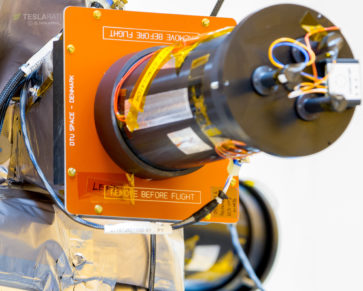 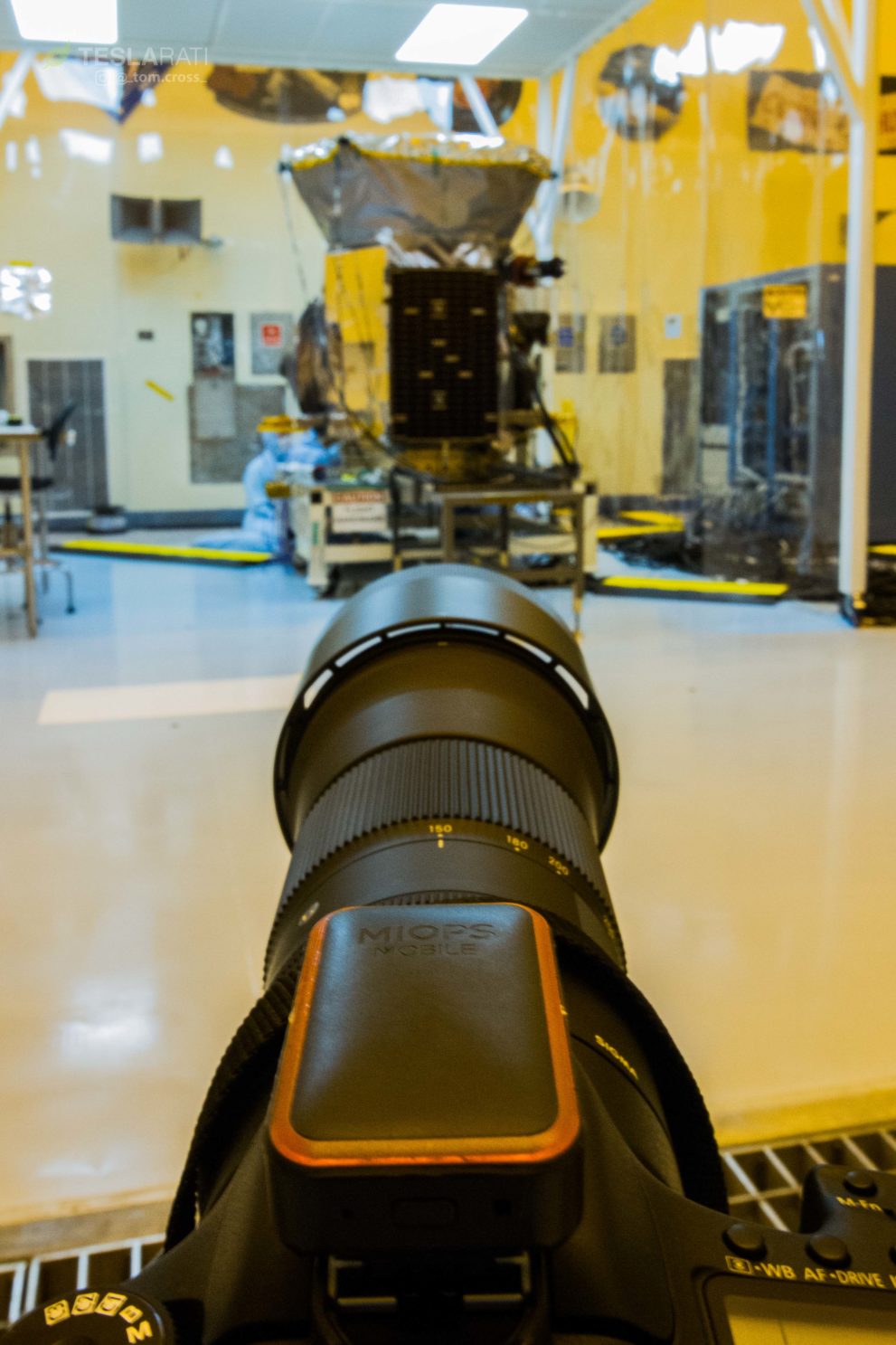 I used Miops Mobile remote to get clear images with slow shutter speeds inside the Clean Room. (Photo/TomCross)

It’s not often I get to see a payload inside a NASA Clean Room. These are always incredible experiences.

Frequently, a mission’s importance is diminished by the fact that we’re unable to see what’s going to space and what its purpose is, mainly weather and communications satellites. They often have state-of-the-art technology on board, which is likely the reason why they want to keep it under wraps. I’m really looking forward to photographing this launch in April now that I have actually seen the payload in person.

After my time was up photographing TESS, I changed out of the bunny-suit and was brought back to the Accreditation Office. I wasted no time getting on my way to see Falcon Heavy’s Side Booster that was temporarily on display at Kennedy Space Center Visitor’s Center. 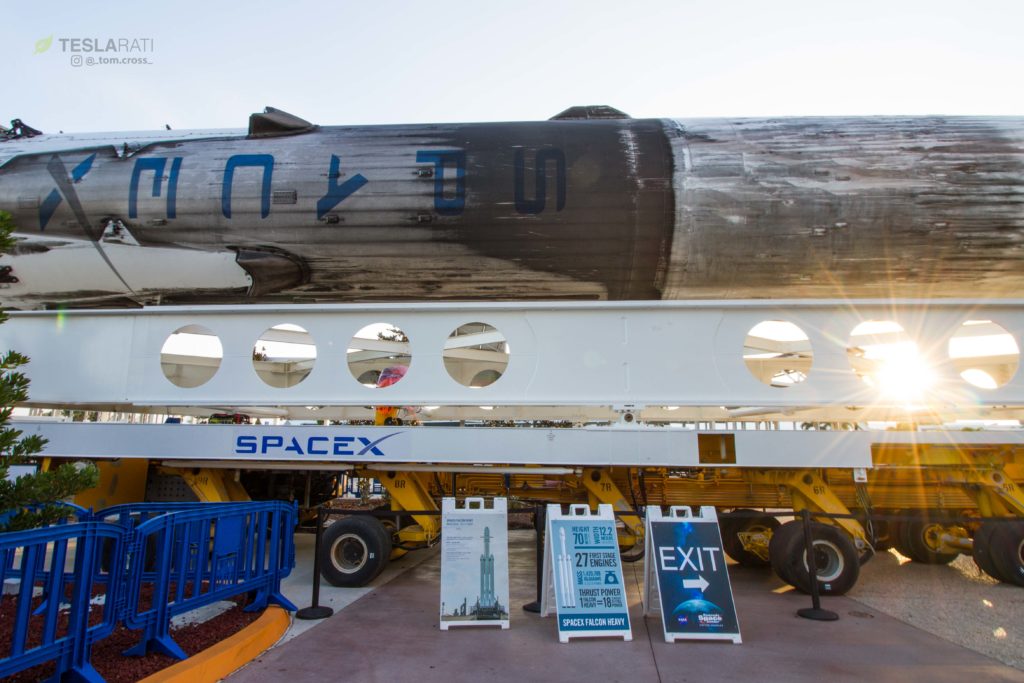 Have a good one,