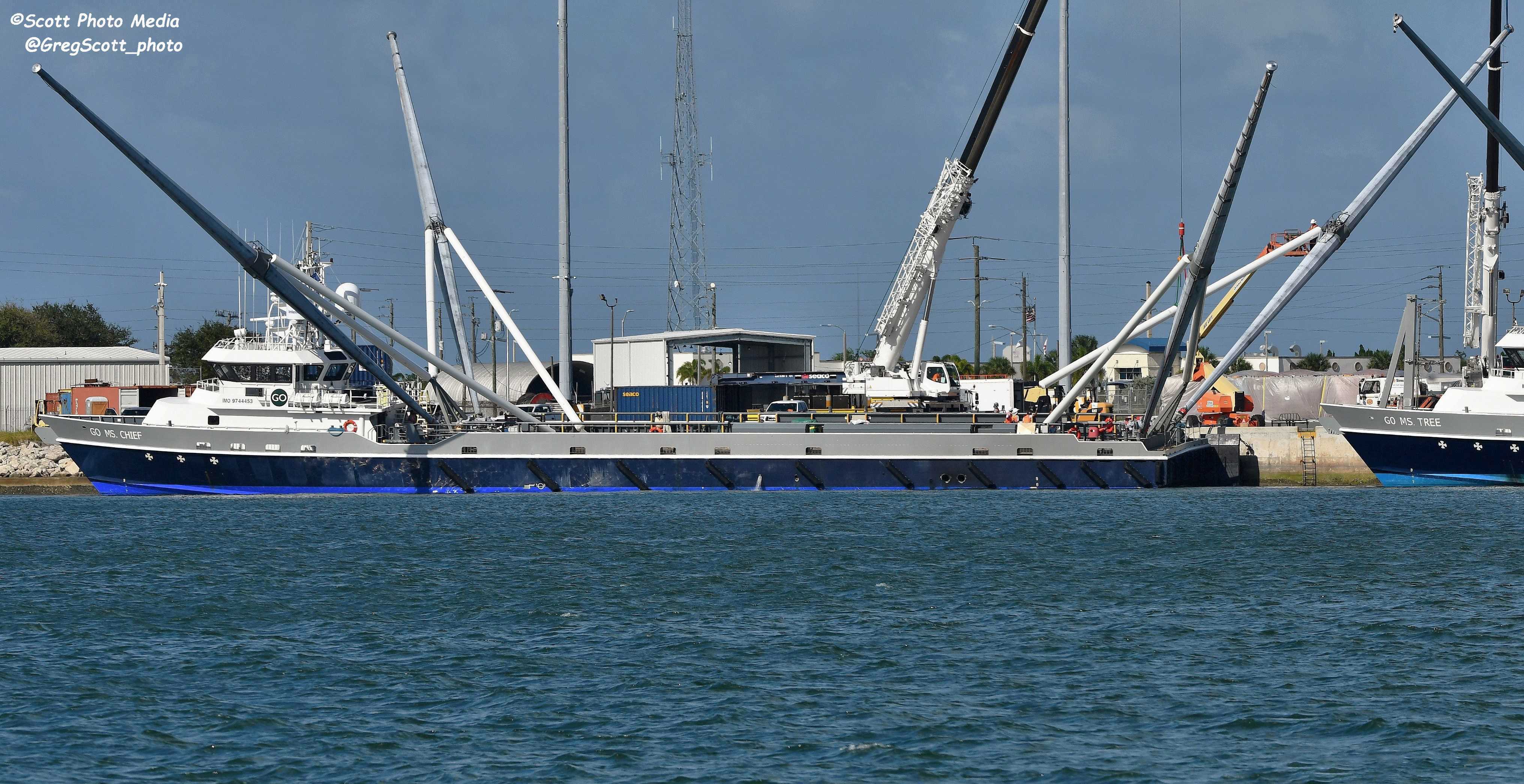 Over the last three or so weeks, SpaceX rocket recovery technicians and engineers have rapidly modified a second Falcon fairing recovery vessel – known as GO Ms. Chief – to the point that it appears to be almost ready for its first catch attempt.

Essentially a twin of GO Ms. Tree (formerly Mr. Steven), Ms. Chief now features four arms – each with two white support beams – that hold two massive, retractable nets. Ultimately, SpaceX has augmented Ms. Tree with Ms. Chief in a bid to simultaneously catch both parasailing halves of a Falcon 9 (or Heavy) payload fairing after any given launch, the Holy Grail of the company’s fairing recovery program.

A few days after the above photos were taken, SpaceX successfully installed Ms. Chief’s fairing-catching nets and has since taken the ship a few miles beyond Port Canaveral limits for sea trails – presumably meant to verify center of gravity and other performance characteristics. This may or may not have included tests of the newly-modified ship’s fairing recovery mechanism, referring to what is understood to be a direct link between fairing and ship designed to autonomously guide both to the right position for a catch.

Ensuring that that new hardware and software is in good working order is probably even more important than installing Ms. Chief’s arms and nets, evidenced by the fact that it took SpaceX more than 16 months and five failed attempts before Mr. Steven (now Ms. Tree) successfully caught its first fairing. The first success came on June 25th after Falcon Heavy’s third successful launch.

In an encouraging sign, SpaceX’s very next launch (with a fairing) – Falcon 9’s August 6th AMOS-17 mission – marked the second successful fairing catch ever, suggesting that the breakthrough(s) that enabled that first success may be broadly applicable. SpaceX’s next launch with a payload fairing should essentially confirm whether the company’s fairing recovery program has truly reached the end of the tunnel or if there is some distance still to go.

Since AMOS-17, however, SpaceX has been in the midst of a period of launch inactivity unprecedented since Falcon 9’s catastrophic Amos-6 failure in September 2016, triggering a fleet-grounding that lasted four months. That lull has undoubtedly given SpaceX’s recovery team plenty of time to outfit Ms. Chief and perform shakedowns of the vessel’s new hardware, but it also means that there have been zero opportunities for additional fairing-recovery data gathering.

Mystery and mischief are waiting for it. pic.twitter.com/akgqg29nQf

According to publicly-available launch manifests, SpaceX no longer has firm dates for its next launch(es). Previously expected to be one or even two Starlink launches, those missions are now scheduled to launch sometime in October or November. The Kacific-1 communications satellite currently has a (fairly) firm launch target of November 11th, making the mission the best possible bet for SpaceX’s next launch – at least for the time being.

On the plus side, regardless of when SpaceX is able to break its now two-month-long launch hiatus, it appears extremely likely that said launch will become the first attempt at simultaneously catching both Falcon fairing halves. If successful, it could quite rapidly pave the way towards fast, low-cost fairing reuse, a necessity for the economic deployment of SpaceX’s Starlink satellite internet constellation.