In a presentation that revealed plans for a private mission to the Moon in as early as 2023, SpaceX CEO Elon Musk dedicated a couple minutes to BFR’s booster and spaceship rocket engine of choice, Raptor. Musk had nothing but praise for SpaceX’s propulsion engineers and technicians, stating that he was “really excited” about the propulsion system’s advanced design.

Judging from a total of 1200 seconds of hot-fires completed just under a year ago, it’s safe to assume that Raptor has soared beyond that measure. Most recently, photos captured earlier this summer showed that a new prototype was installed on SpaceX’s horizontal Raptor test stand in McGregor, Texas, looking nearly identical to the deep black Raptor nozzle shown in Monday’s presentation. Previous Raptor prototypes seen during testing or at the test stand appeared to have a nozzle closer to SpaceX’s silver Merlin 1Ds, whereas this newest iteration’s nozzle doesn’t seem to reflect the powerful spotlights surrounding it.

Perhaps not a coincidence, SpaceX’s propulsion engineering lead Tom Mueller stated in May 2018 that flight-ready Raptors were already “in work”, with the implication being that the finalized Raptor design had been completed and that manufacturing work was beginning in earnest. Barring an unexpected shift in testing strategies, SpaceX will optimize and verify Raptor’s flight design over the course of several hundred seconds of static fire tests, eventually leading into the same practices used for Falcon 9. 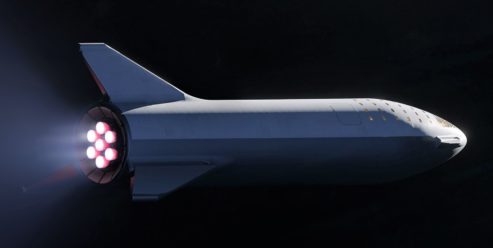 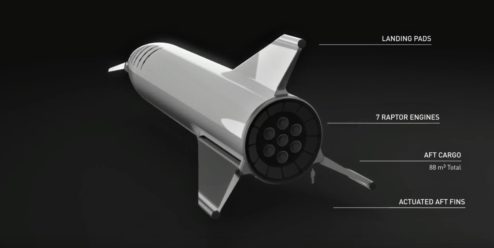 “This is a stupidly hard problem and SpaceX engineering has done a great job with this design.” In a May 2018 tweet, Musk added that “this engine is something special.” – Elon Musk, 09/17/18

Prior to being installed on any BFR prototypes, all Raptors will thus go through acceptance testing in Texas, potentially followed by a full-up static fire of the first completed BFR spaceships. Falcon 9 boosters – capable of roughly 7600 kN (1.7 million lbf) of thrust – are routinely tested in McGregor, while a full BFR spaceship with 2017-grade Raptors (1700 kN at sea level) would produce 12,000 kN (2.7 million lbf) of thrust with all Raptors firing. However, due to the sheer difficulty of transporting something 9 meters in diameter by road, it’s more likely that SpaceX will need to build up a dedicated static fire and hop test facility near the coast of Texas, at a spot called Boca Chica.

Getting to hop tests

As it turns out, massive propellant storage tanks (vacuum insulated) have already begun arriving at SpaceX’s Boca Chica facilities, currently dedicated to a duo of tracking and communications radars to be used for Crew Dragon communications. Over the course of the next 12 or so months, SpaceX is thus likely to expand and develop its Boca Chica facilities, culminating – if all goes well – sometime late next year with the first shipment of a prototype BFR spaceship from Port of Los Angeles, through the Panama Canal, to Port of Brownsville, Texas.

“Even others in the aerospace industry don’t know what question to ask – once we could frame the question [with precision], the answers [for Raptor and BFR R&D] flowed.” – Elon Musk, 09/17/18

SpaceX has already completed the first composite segment (both a section of the fuselage and of a propellant tank) of the first BFR spaceship prototype, and Musk further stated that BFR’s structural engineers and technicians would begin fabricating the spaceship prototype’s propellant tank domes and engine section “soon”. A vast amount of work remains to be completed before that prototype will begin to look anything like an actual spaceship, and the exact fidelity SpaceX is hoping to achieve with it is unclear.

If the company tries to get as close as possible to a finished product (within reason, of course) before beginning propulsive hop tests in Texas, a very late-2019 debut of that test campaign could be a practical goal. It’s not a perfect comparison, but Falcon 9 is perhaps the best prior example of SpaceX’s speed of development, moving from structural fabrication and testing (albeit with Falcon 5 in mind) in 2006 and 2007 to a full-up orbital launch of the first Falcon 9 in mid-2010, with milestones like the first static fire of a booster octaweb and nine Merlin 1C engines 6-12 months prior.