Just before Christmas, SpaceX successfully completed a mission of landing the first stage of a Falcon 9 rocket back on land after delivering 11 commercial satellites into orbit. The historic moment was a huge step forward for space travel because the ability to reuse the first stage rocket will lower the cost of future flights by a dramatic scale.

In traditional rocket flight, the first stage carries a large amount of fuel and is discarded after takeoff, making the practice a very costly one – something SpaceX aims to change with its reusable rocket.

Falcon 9 back in the hangar at Cape Canaveral. No damage found, ready to fire again. https://t.co/7w6IfJGtXM

The next SpaceX flight will carry a Jason 3 ocean monitoring satellite into orbit for NASA. Once again, SpaceX will attempt to recover the first stage booster, but not on dry land this time. This upcoming flight scheduled for January 17, SpaceX will try to land the first stage rocket on a platform floating in the ocean far from its launch site at Vandenberg AFB in California. 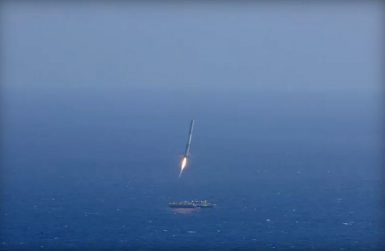 The December launch used a more powerful version of the Falcon 9, but for this flight SpaceX will use the last of its Version 1.1 rockets, which have significantly less power and can carry far less fuel. It does not have the ability to navigate itself back to the launch site and land itself on a sea barge along its intended flight path.

Landing on a drone ship in the Pacific Ocean will allow the less powerful rocket to carry less fuel and travel a shorter distance. If successful, SpaceX will make recovery of less expensive rockets possible. Landing at sea also opens up many more possible recovery sites.

SpaceX has tried this twice before and both ended in failures. But in the world of Musk, failure is just one step on the road to success. The third time’s a charm, so they say.

Rocket made it to drone spaceport ship, but landed hard. Close, but no cigar this time. Bodes well for the future tho.