Tesla has begun downloading firmware version 7.1 to all its cars wirelessly via the internet. The changes include self parking in vertical spaces and the ability to summon the car from a garage to the owner’s location remotely.

Tesla began its roll out of v7.1 overnight that allow Model S and Model X owners to summon their cars to come pick you up and self-park, along with new Autosteer and Autopark updates.

Among the more notable updates are the improved HomeLink feature that now opens and closes your garage based on your proximity to home, real-time Supercharger availability checking, auto-adjusting brightness for the center touchscreen, and perhaps the most exciting, the new ‘summoning’ feature.

Tesla’s v7.1 summoning feature combined with the HomeLink update allows owners to call their vehicle, by way of pressing the center button on the key fob, which will in turn send a signal to the vehicle and initiate it to automatically drive itself to the owner. The car will automatically open the garage door, drive itself out, and proceed to the owner’s location autonomously.

Thanks to the efforts of Electric Jen, who rose early to make the following series of Tesla ‘summoning’ demonstration videos. Autopark has also been improved. The Tesla can now self park itself in a perpendicular space instead of only parallel parking against a curb. If the car is instructed to park itself in a gargage, Tesla warns that it may not detect narrow items like bicycles parked against the wall of a garage or items hanging from the rafters, like a kayak. It also cannot “see” objects below the front fascia, such as skateboards. Make sure your garage is “Tesla-proofed” before using this new feature. 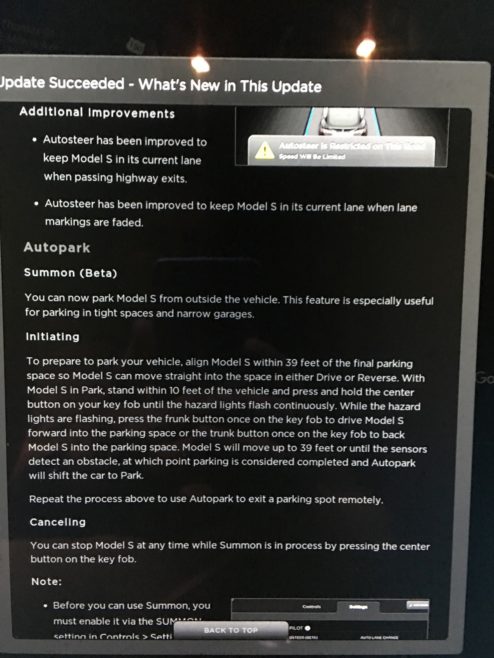 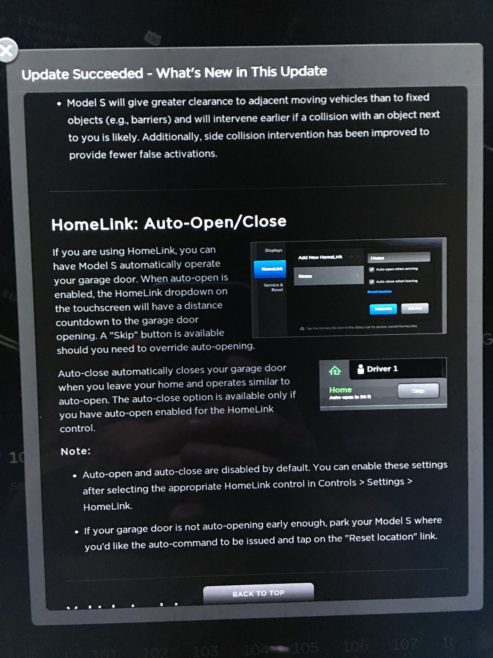 Real time visualization has been improved. The dashboard now shows multiple vehicles on the road ahead and can distinguish between cars, trucks and motorcycles. The car will also slow itself if you are in the right hand lane on the highway approaching an exit. Forward Collision Warning has been improved to decrease the number of false alarms while TACC is active.

Tesla has also added a new feature to the automatic door handles that stops them from presenting themselves until you press the appropriate button on the key fob. One press activates just the driver’s door handle. Two activates all four. Presumably this is designed to assuage the concerns of those concerned about unauthorized persons entering the vehicle.  Trip planning services have also been improved as have notifications when a particular Supercharger is unavailable because of maintenance or other issues. 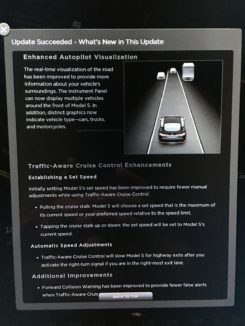 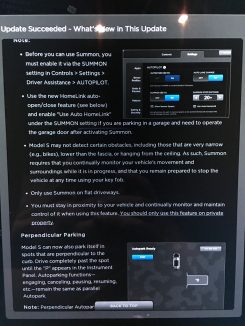 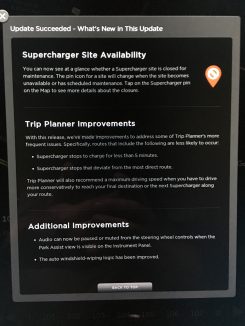 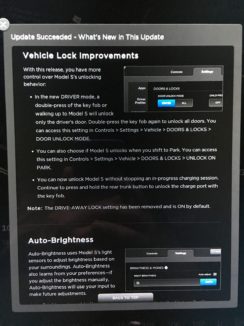 Once again, Tesla has demonstrated how far ahead of the competition it is. Not only can it download software updates wirelessly, it also listens to its customers and works diligently to incorporate their needs in all updates. Other companies try, but no one does it as well as Tesla.

Check back with us here at Teslarati for firmware feature demonstrations. News also available on demand through our iOS and Android app.