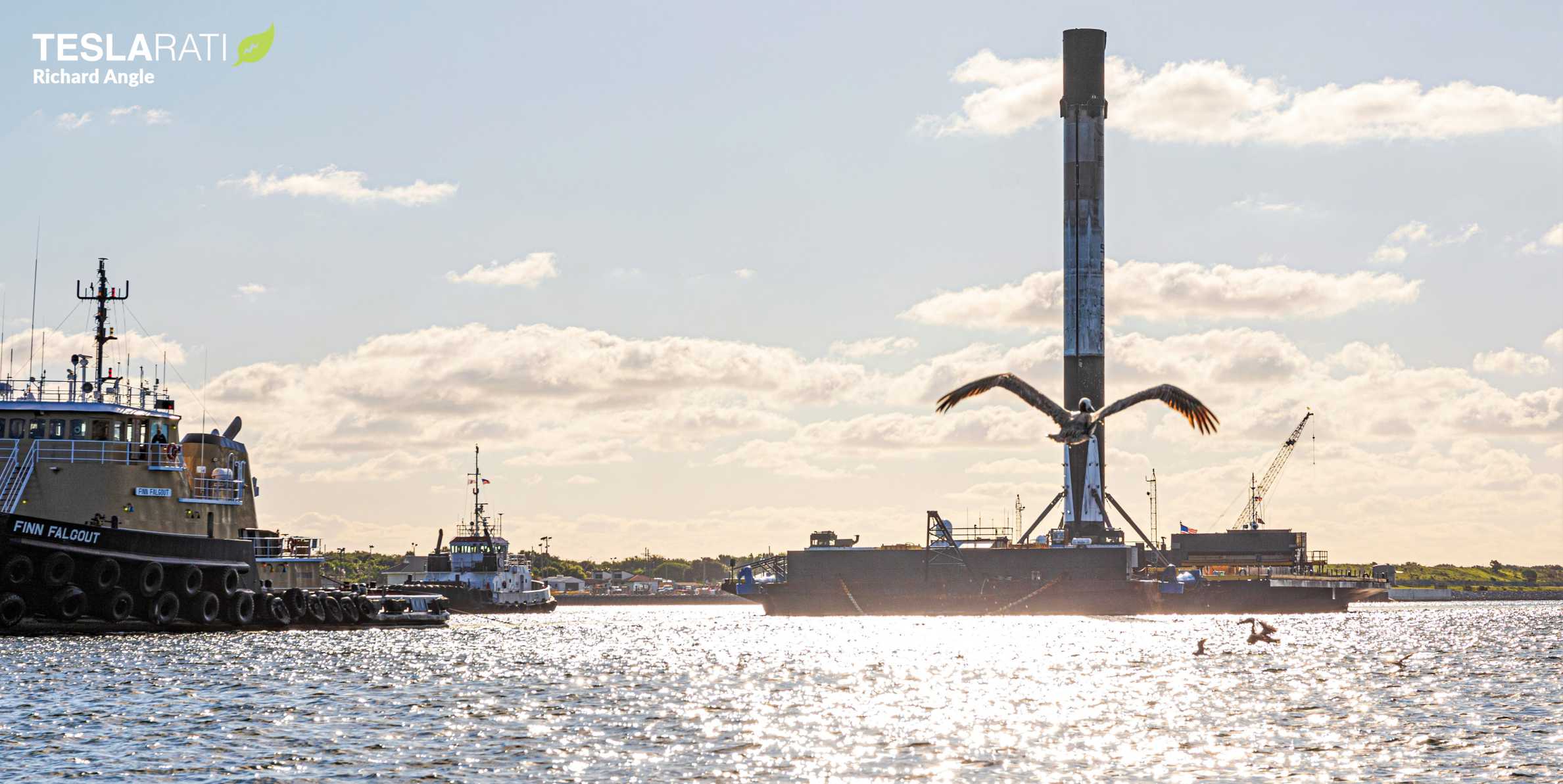 Falcon 9 has returned to port for the second time this month - halfway to a record month for SpaceX. (Richard Angle)

SpaceX and CEO Elon Musk’s rocket reusability dream appears to be within reach for the first time ever after technicians managed to retract the most recently-launched Falcon 9 booster’s landing legs and bring it horizontal in record time.

On the heels of a SpaceX’s second orbital-class Falcon 9 launch, landing, and recovery just this month, the recovery milestone could mean that booster B1059 is being prepared for the fastest turnaround in the company’s history. Together, with two Starlink launches now complete less than two weeks into June 2020 and a third internet satellite mission scheduled as early as June 22nd, the odds are better than ever that SpaceX will be able to pull off a record launch cadence heading into the second half of the year.

Averaged out, a sustained frequency of one launch every ~7 days would give SpaceX the ability to perform more than 50 orbital launches annually. In fact, just earlier this year, an environmental impact assessment completed for upgrades at Kennedy Space Center (KSC) Pad 39A revealed plans for as many as 70 annual launches from SpaceX’s two Florida pads by 2023.

Technically, SpaceX has already demonstrated that those two Florida launch pads – KSC Pad 39A and Cape Canaveral Air Force Station (CCAFS) LC-40 – are able to support 60-70 annual launches when pushed to their limits, with the latter pad recently performing two launches in just nine days for a potential maximum of 40 launches in one year. If SpaceX can pull off four Falcon 9 launches in 27 days, as it’s currently scheduled to do, the company will have already come a majority (75%) of the way to demonstrating that its fleet of Falcon rockets is also up to the task.

Currently the newest flown booster in SpaceX’s Falcon 9 fleet, the company has also wasted no time processing B1059 after ~8 am EDT return to Port Canaveral, kicking off landing leg retraction scarcely eight hours after berthing. B1059’s first sea recovery was also the second use of drone ship Of Course I Still Love You’s (OCISLY) upgraded Octagrabber, a tank-like robot used to keep technicians safe while remotely securing Falcon boosters on the high seas.

By all appearances, SpaceX is using a new recovery method debuted with Falcon 9 booster B1058 earlier this month for the second time. With that significant operational tweak, the company no longer has to crane Falcon 9 boosters off of the drone ship before it can begin landing leg retraction – itself a process that’s barely a year old. By entirely supporting a booster with an upgraded Octagrabber robot and retracting its legs in situ, SpaceX can completely skip a recovery processing step, only lifting the rocket once it’s ready to be broken over (brought horizontal) and loaded onto a transporter.

Unsurprisingly, on its first use, the improved efficiency allowed SpaceX to process a booster faster than any before it, breaking the previous record of ~1.9 days from port arrival to departure on a horizontal transporter. Now, B1059 is already on pace to beat B1058’s weeks-old recovery turnaround record. Extra-efficient recovery processing and the unprecedentedly rapid booster reuse it could soon enable will be crucial if SpaceX hopes to sustain a cadence of 3-6 Falcon 9 launches per month over the next few years.

Such a cadence is a necessity for the expedient deployment of the 12,000 to 40,000-satellite Starlink internet constellation. With SpaceX all but guaranteed to demonstrate three Starlink launches in a single month (in fact, less than three weeks), the company is making rapid progress in the right direction.

In fact, as of writing, Falcon 9 B1059 has already had all four landing legs retracted and was lifted off drone ship OCISLY, broken over, and placed on SpaceX’s custom booster transporter less than 10 hours after it arrived in port. A step further, SpaceX took an incredible 8-9 hours after docking to bring the booster horizontal, crushing the previous record – ~27 hours – by a factor of three or more.

Given that unprecedented expediency, it wouldn’t be crazy to imagine that SpaceX could be aiming for a record-breaking booster turnaround on one of its next few Starlink launches, scheduled June 22nd and sometime in July. Held by the late booster B1056, SpaceX’s current turnaround record (the time between two launches) is 62 days, while the company and CEO Elon Musk’s ultimate reusability goal is to fly the same booster twice in just 24 hours.

Drone ship recoveries, of course, will almost always require at least a few extra days to travel back to port. Still, the fact that 99% of the processing needed to transport a booster can now be finished in as few as ~8 hours is the first unequivocal proof that a 24-hour turnaround is within SpaceX’s reach – so long as the rocket lands on land or the time in transit is excluded.