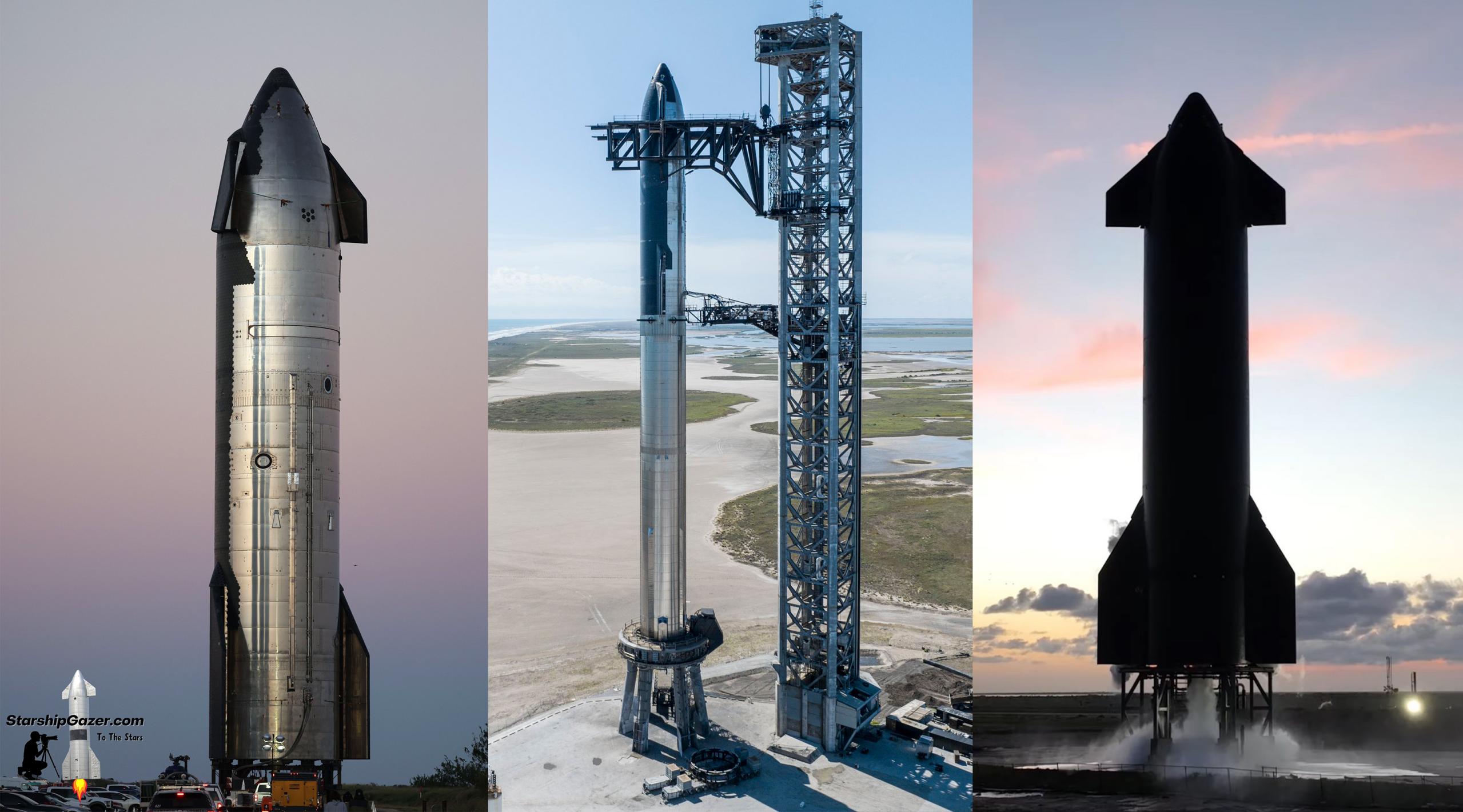 SpaceX is busy preparing for the orbital launch debut its next-generation Starship rocket, but the company’s South Texas rocket factory is also working around the clock to prepare several more sets of ships and boosters for the flight testing that will follow.

That was more obvious than usual on November 8th, when SpaceX made moves to prepare both of its finished Starships for new phases of testing. SpaceX kicked off the busy day by removing Starship S25 – a newer prototype that arrived at the launch site just three weeks prior – a stand dedicated to proof testing ships. Three hours later, after spending three of the last four weeks sitting on top of Super Heavy Booster 7, Starship S24 was ‘destacked’ (lifted off of B7 and lowered onto a stand on the ground) in the early afternoon.

Booster 7, Ship 24, and Ship 25 have all been busy since mid-October. SpaceX stacked Booster 7 and Ship 24 for the first time on October 11th and then attempted to test the fully-stacked rocket on October 13th. By some accounts, although almost nothing was visible to the public, the first full-stack test may have gone poorly, potentially even endangering pad technicians that approached the rocket to troubleshoot. On October 16th, SpaceX fully destacked Ship 24, and CEO Elon Musk noted that the company was “proceeding very carefully” to avoid an explosion that coudl set “Starship progress back by ~6 months.”

But if there was a major issue on October 13th, SpaceX didn’t show it, and Ship 24 was reinstalled atop Booster 7 on October 20th without any obvious maintenance or repairs. SpaceX then kicked off an unusual series of tests on October 24th, during which it only filled the liquid oxygen (LOx) or liquid methane (LCH4) tanks of Super Heavy B7, Ship 24, or both vehicles at once. A rare NASA briefing on October 31st later called them “single-species prop[ellant]” tests – a kind of extra-cautious testing that had never been seen before at Starbase. A few days prior, a member of NASA’s Aerospace Safety Advisory Panel (ASAP) noted that an accidental explosion that damaged Booster 7 in July had caused SpaceX to “increase [the rigor of its] systems engineering and risk management,” explaining the sudden influx of unusually conservative testing.

By the time Ship 24 was destacked from Booster 7 on November 8th, SpaceX had completed seven single-species tests, four of which involved loading LOx or LCH4 into both stages and three of which only tested Super Heavy. Booster 7 and Ship 24’s tanks were fully filled and LCH4 and LOx were never simultaneously loaded on either stage.

NASA’s October 31st briefing reported that SpaceX had plans to destack Ship 24 before conducting additional static fire testing with Booster 7. While B7 completed 1, 3, and 7-engine static fires in August and September, those tests were nowhere close to the full 33-engine static fire required to properly qualify the most powerful rocket in history. According to NASASpaceflight.com managing editor Chris Bergin, SpaceX’s next goal is to fire up approximately half of Super Heavy B7’s Raptors.

Strangely, although Ship 24 was believed to have completed all of the standalone testing needed to clear it for flight, SpaceX installed the vehicle on a stand used for Starship static fire testing on November 9th, implying that more standalone testing may be required. For now, that shouldn’t pose a problem as long as SpaceX wraps up any additional Starship testing around the same time as Booster 7’s next static fire campaign wraps up, but it could delay full-stack launch readiness if it takes any longer.

Finally, after Ship 25 was removed from SpaceX’s other Starship test stand on November 8th, it was rolled back to Starbase’s Starship factory. Ship 25 first rolled to the launch site on October 19th and has since completed four visible tests. On October 28th, Ship 25 survived a pneumatic proof test that showed that its tanks were leak-free and capable of surviving flight pressures (roughly 6-8.5 bar or 90-125 psi). Three cryogenic proof tests followed on November 1st, 2nd, and 7th. The first cryoproof was likely just that – a test that pressurized Ship 25’s tanks and filled them with cryogenic liquid nitrogen (LN2) or a combination of liquid oxygen and LN2.

The next two tests likely took advantage of the customized test stand, which has been semi-permanently outfitted with a set of hydraulic rams that allow SpaceX to simulate the thrust of six Raptor engines while Starship’s structures are chilled to cryogenic temperatures and loaded with roughly 1000 tons (~2.2M lb) of cryogenic fluids. If a Starship can survive those stresses on the ground, the assumption is that it will likely survive similar stresses in flight.

Assuming that Ship 25’s first several proof tests were successful, which they appear to have been, SpaceX returned the prototype to its Starbase factory to install six Raptor engines and a series of shields and firewalls that will protect those engines from each other. Once fully outfitted, Ship 25 will return to the launch site for static fire testing and take Ship 24’s place on Suborbital Pad B. Ship 24 took approximately two months to go from its last cryoproof to its first static fire. But its testing got off to a relatively rocky start, so Ship 25 could be ready sooner.

SpaceX could begin the next phases of Booster 7 and Ship 24 testing as early as November 10th or November 13th.