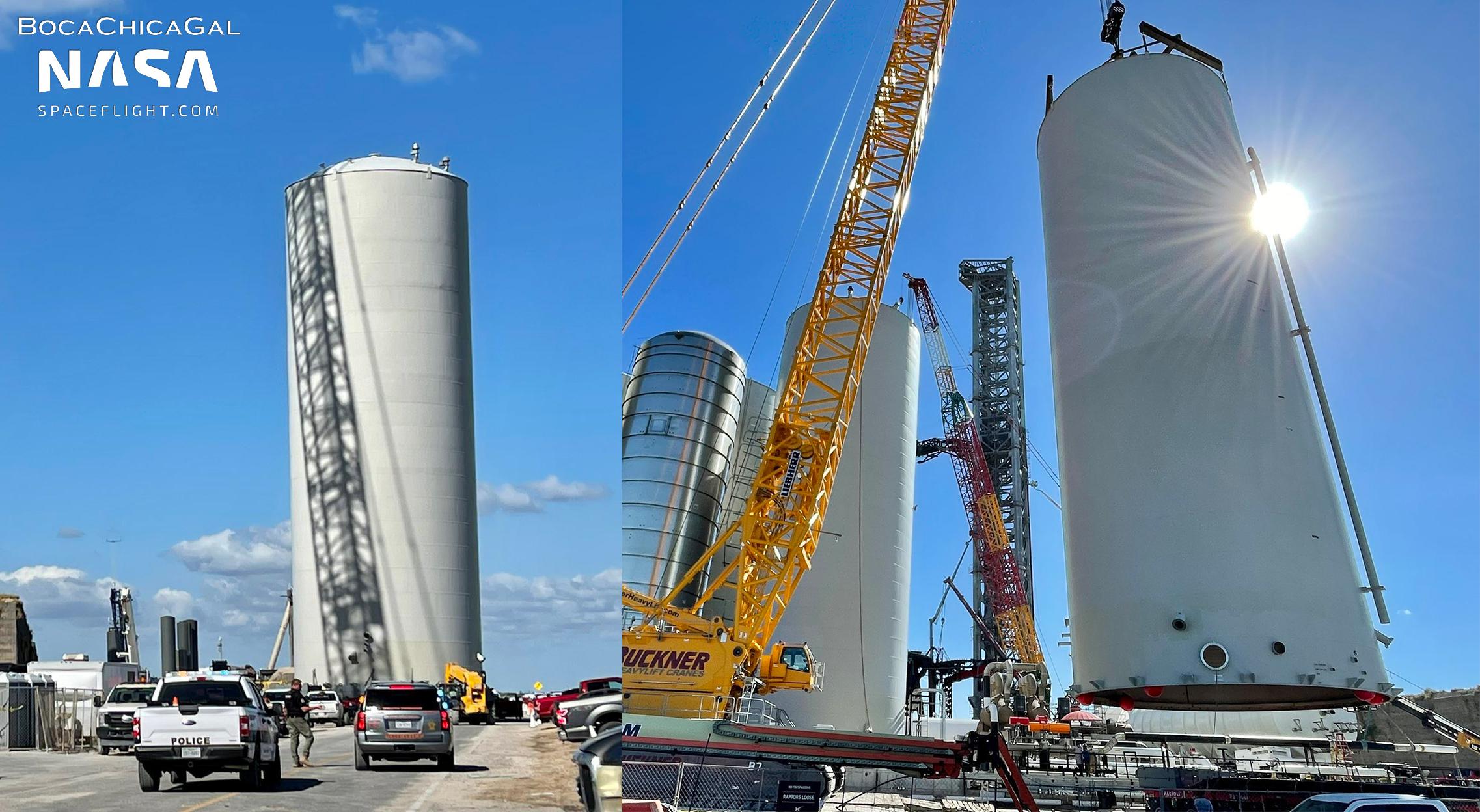 While the horizontal tank moved to the pad on Sunday remains decidedly mysterious, the ‘cryoshell’ is a well-understood component of SpaceX’s custom-built solution to Starship and Super Heavy propellant storage. Unlike virtually all other modern orbital launch sites, including SpaceX’s three Falcon pads and suborbital Starship test site, the company decided to build its first orbital-class Starship tank farm more or less from scratch. Though the number of off-the-shelf tanks continues to increase in recent weeks, the farm’s primary tanks – tasked with storage thousands of tons of liquid oxygen and methane propellant and liquid nitrogen coolant – are essentially stretched and lightly modified Starships.

Built in the same Starbase facilities with the same techniques and out of the same parts as Starship tanks, SpaceX’s custom storage tanks are likely cheaper than alternatives. However, they still amount to thin, uninsulated steel tanks – about as bad a vessel as it gets for the stable storage of cryogenic fluids. To solve the problem of insulation, SpaceX split the difference between pure vertical integration and a pure off-the-shelf solution and contracted with a third party to build massive ‘cryoshells’ – 12m (~40 ft) wide cylinders that ‘sleeve’ SpaceX’s custom 9m (~30 ft) wide storage tanks.

For the first of several anticipated orbital Starship launch pads and tank farms, that contractor built eight shells for SpaceX – seven sleeves and one million-gallon water tank. Over the last six months, SpaceX has installed the water tanks, completed all seven custom-built propellant storage tanks, and ‘sleeved’ five of those tanks. Beginning in September, two or three of the five sleeved tanks have even graduated into cryogenic proof testing.

Just days ago, SpaceX also began delivering liquid oxygen (LOx) to the orbital tank farm for the first time ever, suggesting that the company has begun the slow process of filling one, two, or even all three of the farm’s LOx tanks with a small army of tanker trucks.

On Monday, October 18th, SpaceX rolled the first of the last two remaining cryoshells from their build site to the orbital tank farm. Hours later, SpaceX attached a crane, lifted the sixth cryoshell, and sleeved GSE tank #8 – the second of two methane tanks. With that installation out of the way, there’s now a good chance that Starship’s first orbital tank farm will be structurally complete by the end of the month. With a vast majority of plumbing already in place and the process of filling the spaces between cryoshells and GSE tanks with insulating foam already underway, it’s possible that the farm will be ready to support some level of Super Heavy wet dress rehearsal and static fire testing sometime next month.

In the meantime, there remains the mystery of a pair of massive horizontal liquid methane (LCH4) tanks – the first of which was installed at the orbital tank farm on Sunday, October 17th. Likely capable of holding about as much fuel as each of SpaceX’s two custom-built LCH4 storage tanks, it’s unclear why the company appears to be effectively doubling the orbital pad’s LCH4 storage capacity with the addition of two new tanks purchased off the shelf.