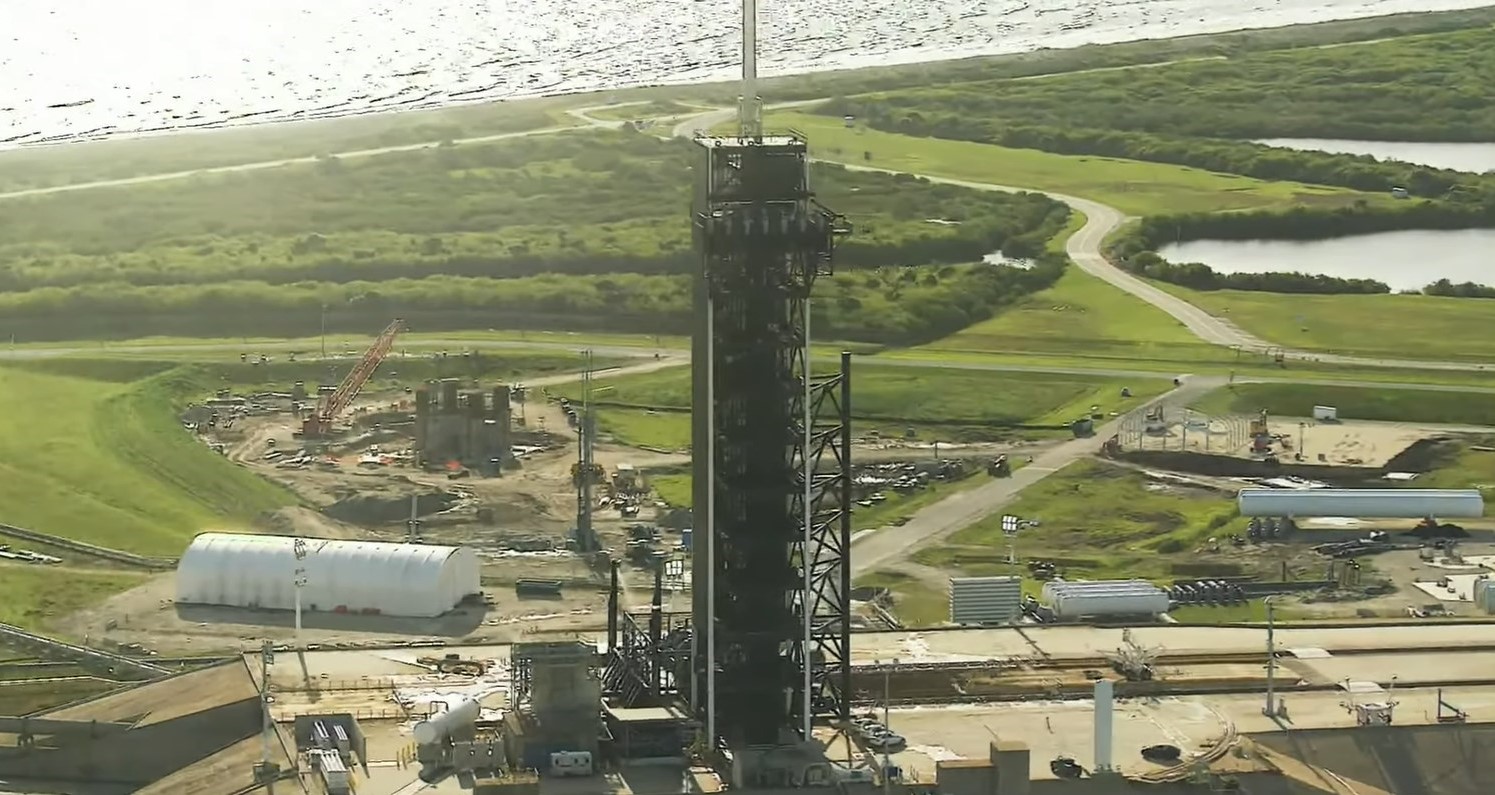 After restarting work on the project a few months ago, SpaceX appears to have gotten back up to speed and begun to make rapid progress on the construction of Starship’s first Florida launch pad and tower.

Located at NASA’s Kennedy Space Center (KSC) Launch Complex 39A facilities, SpaceX has intended to construct a Starship launch site there for several years. A serious attempt was made in late 2019 but SpaceX soon abandoned the effort and redirected its energy towards Starship prototyping and a much different launch pad design. Two years later, SpaceX’s second attempt shares only a little in common with the first. Both are to be located within the eastern half of Pad 39A’s shield-like footprint, although the specific location of the tower and launch mount has been modified. If this attempt comes to fruition, Starship’s first East Coast launch facilities will still sit just a few hundred feet away from the only SpaceX pad capable of launching Crew Dragon, Cargo Dragon, or Falcon Heavy.

Instead of continuing with an older launch pad design, Starship’s 39A facilities will likely be close to a direct copy of Starbase’s first orbital launch site (OLS), which SpaceX began constructing in earnest in late 2020. It’s safe to assume that some lessons have been learned from Starbase OLS construction and that some modifications will be made to the Florida pad’s design, but no obvious changes are thus far visible.

Most of the visible work SpaceX has done this year centers around the company’s KSC-based Roberts Road facilities, where it has built a major Falcon processing facility and a staging yard for Starship pad construction and broken ground on a massive East Coast Starship factory. At that staging yard, SpaceX began assembling prefabricated sections of Starship’s Pad 39A ‘launch tower’ around March 10th after tower parts began arriving at KSC sometime in February. Within two weeks, SpaceX had completed the basic structure of two tower sections. Another two more weeks after that, around April 11th, a third section had reached a similar level of completion and SpaceX had begun assembling a fourth.

Compared to SpaceX’s Starbase tower assembly, Florida Starship work appears to be proceeding at a similar pace. SpaceX began assembling the fourth Florida tower section about 30 days after starting the first, while Starbase took about 25 days to reach the same point. However, SpaceX does appear to be taking a slightly different approach for Pad 39A. On top of tower section assembly, SpaceX is constructing an extra four sets of the small concrete foundations and steel frames each tower section is assembled on, implying that Starship’s Florida launch tower could be almost entirely prefabricated before SpaceX begins to combine those sections.

That differs from Starbase, where SpaceX rarely constructed more than two or three tower sections at a time before removing and stacking each completed section and beginning to assemble the next on the same foundation and jig. However, while undeniably efficient, SpaceX workers then had to spend months outfitting the tower with plumbing, wiring, additional structure, and more. It’s likely that SpaceX has concluded that it’s better to do as much of that work as possible before the tower is assembled, in which case each Florida section may end up spending more time on the ground. Given the obvious challenges imposed by attempting a major construction project at an active, one-of-a-kind launch pad like LC-39A, it would make even more sense for SpaceX to want to complete as much work as possible before moving Starship pad hardware into the line of fire.

Nonetheless, work will still have to be done at the pad itself. In recent weeks, SpaceX has made significant progress on the foundations 39A’s Starship launch tower and mount require. The bottom half of the concrete base that each steel tower section will eventually sit on has also progressed rapidly. All told, SpaceX is will on its way to replicating Starbase’s orbital Starship launch site on the East Coast, hopefully ensuring that Starship will be able to begin orbital test flights within the next 6-12 months even if the company’s Starbase environmental review continues to be bogged down by bureaucracy.