Starship revealed a trio of what appear to be new Raptor engines when SpaceX technicians moved the assembly from stand to ground. (NSF - bocachicagal)

Following a brief ‘hop’ (via crane) off of a concrete build stand, the aft section of SpaceX’s first full-scale Starship hopper (Starhopper?) revealed that SpaceX technicians have already installed what appear to be three real Raptor engines, presumably the first time the propulsion system has ever been mounted to something that might eventually fly.

Star ship hopper might be a bit bigger than we thought and with the crane placements over the nose end of the vehicle. This could suggest, @SpaceX are planning to move the segment elsewhere perhaps to the welding stand? We will have to wait and see. (Austin Barnard?) #2019? pic.twitter.com/kn8hhUPWCU

Despite an already shocking series of rapid-fire developments in the South Texas Starhopper saga, the abrupt appearance of what appears to be three Raptor engines – mirroring CEO Elon Musk’s recent statement that the test vehicle would sport three Raptors – is by far the most unexpected moment yet for the prototype Starship. Purportedly a full-scale prototype of BFR’s upper stage/spaceship (now known as Starship), Musk indicated over the last two weeks that the hopper has been designed to perform a number of hop tests in which the craft’s three Raptors would power it to a range of (relatively low) altitudes above Boca Chica, Texas.

According to a recent FCC filing related to this test program, SpaceX is currently seeking a license for Starship hop tests that will not exceed 5 km (3.1 mi) in altitude and/or 6 minutes in duration. There is admittedly nothing mentioned about the maximum allowed velocity during those tests, but – much like Blue Origin performs supersonic tests of New Shepard in Cape Horn, Texas – SpaceX will likely seek and be granted permission to break the sound barrier during those hypothetical tests. Nevertheless, a 5km ceiling is a fairly significant cap on the range of performance Starhopper will be able to test – accelerating vertically at 2Gs, Starhopper could travel from sea level to 5km in less than 30 seconds while reaching speeds no higher than Mach 1-1.5. 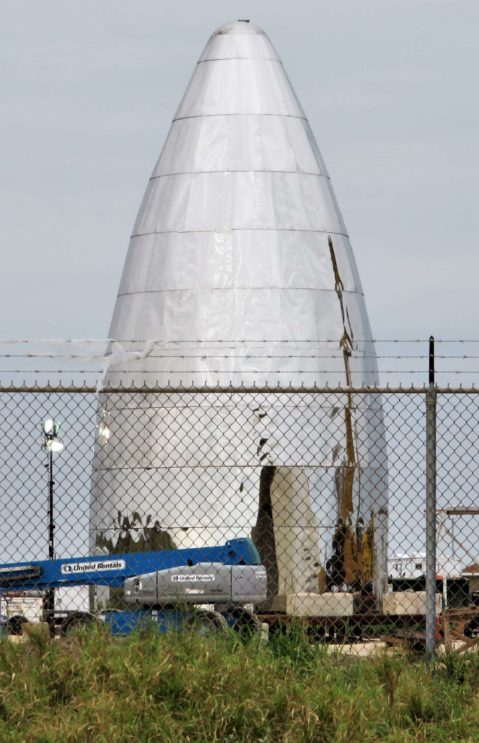 SpaceX technicians and engineers are continuing to work at a breakneck pace on Starhopper. (NASASpaceflight – bocachicagal) 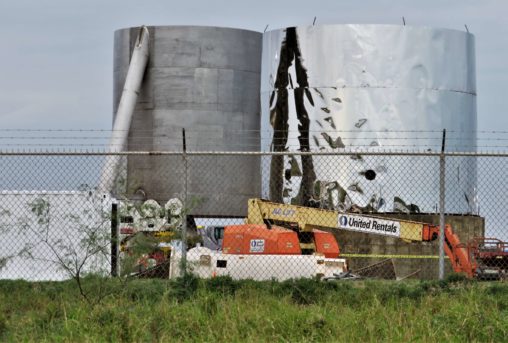 At this rate, the hopper will likely wind up around 40m (130 feet) tall. (NASASpaceflight – bocachicagal) 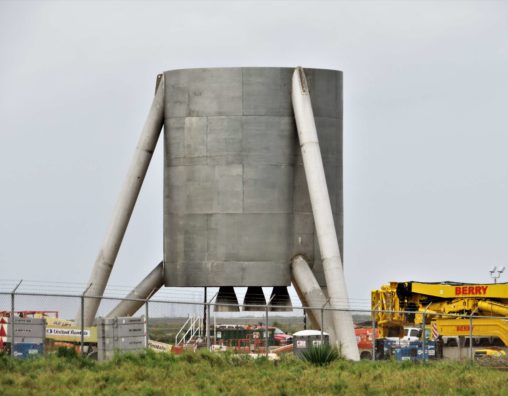 A close examination of these three engine-like protrusions suggests a level of fit and finish far exceeding a boilerplate stand-in. (NASASpaceflight – bocachicagal)

Combined with the apparent fact that this Starhopper’s fins seem unlikely to ever actuate (i.e. no aerodynamic control surfaces), it’s probable that this ad hoc prototype is only meant to perform a very limited range of hop tests, perhaps as basic as ironing out the kinks of operating a trio of gimballed Raptors and ensuring that they can safely and reliably launch, hover, and land a very large Starship-shaped mass simulator. Falcon 9’s Grasshopper and F9R reusability testbeds performed a very similar task some five years ago, offering SpaceX engineers the opportunity to optimize software and hardware needed to reliably recover real orbital-class rockets after launch. Although Falcon 9 has nine gimballed Merlin 1D engines, SpaceX has long sided with the sole center Merlin as the dedicated landing engine and has only briefly experimented with triple-Merlin landing burns.

According to Musk, Raptor –  an advanced liquid methane and oxygen engine with a uniquely efficient propulsion cycle – was expected to produce an impressive ~2000 kN (200 ton, 450K lbf) of thrust in its finished form as of September 2018. However, Musk also mentioned in a late-2017 Reddit AMA that SpaceX engineers were modifying the ship’s design to ensure engine-out reliability during all regimes of flight, landing in particular. To accomplish this feat with an engine as powerful as Raptor, two or three Raptors – capable of producing as much as 600 tons of thrust total – would need to reliably throttle as low as 25%, assuming a landing mass of around 150t. To allow a nearly empty ship (~100t) to still reliably land with three Raptors ignited, the engines would need to be able to throttle to 20% or less.

Known as deep throttling in rocketry, ensuring stable combustion and thrust at 20% (let alone 40%) throttle is an extraordinarily challenging feat, often subjecting engines to forces that can literally tear non-optimized hardware apart. To achieve such a deep throttle capability without excessively disrupting the engine’s design, SpaceX appears to have potentially sided with less efficient but extremely simple alternative, known as a dual-bell (or dual-expansion) rocket nozzle. A 1999 Rocketdyne paper concisely explained the primary draws of such a nozzle:

Given that SpaceX has decided to delay the introduction and certification of a vacuum-optimized Raptor engine, choosing to instead use the same Raptor on both BFR stages, something like a dual-bell nozzle would be one of the best possible ways for the company to retain some of the efficiency benefits of a vacuum engine while also drastically improving design simplicity, ease of manufacturing, and cutting development time. Aside from offering efficiency gains by way of altitude compensation, a dual-bell nozzle also happens to enable a given engine to operate a much wider throttle range by mitigating problems with flow separation and instability. 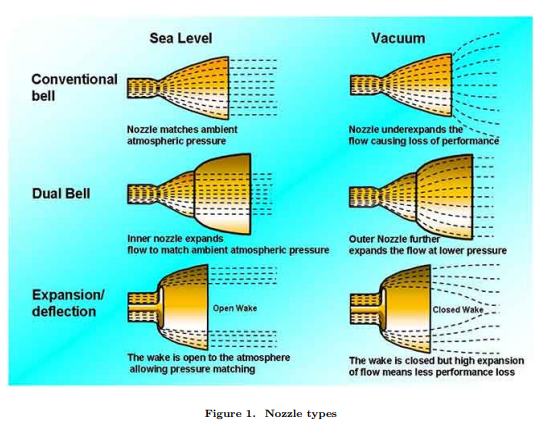 An overview of dual-bell and deflection nozzles. Raptor appears to have now graduated to the former style. (Johan Steelant, 2011) 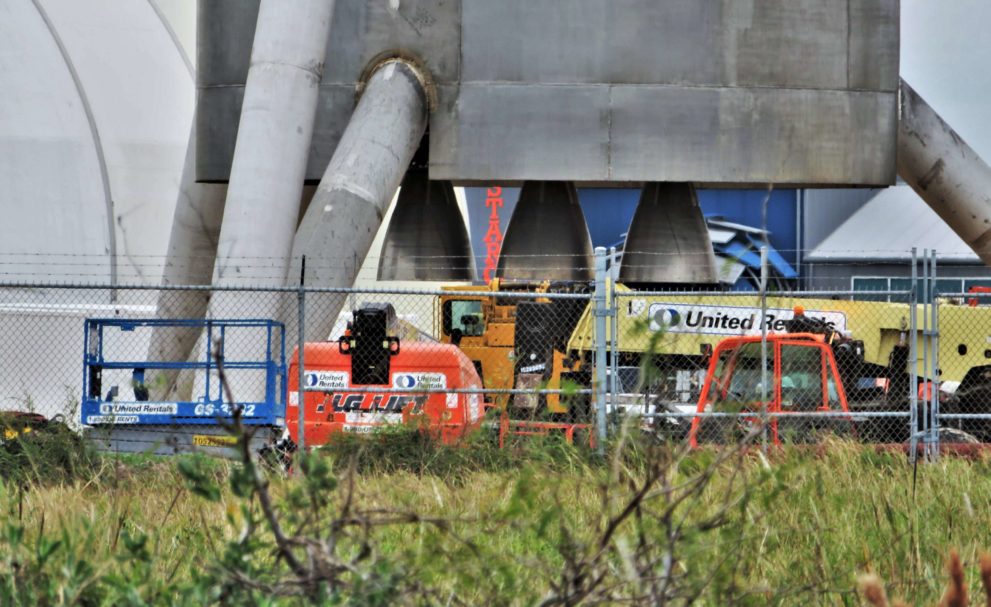 For Starhopper and Starship, both aspects are an undeniable net-gain and it’s entirely possible that these dual-bell nozzles – if successfully demonstrated – could find their way onto Falcon 9 and Falcon Heavy to further boost their booster performance and efficiency.