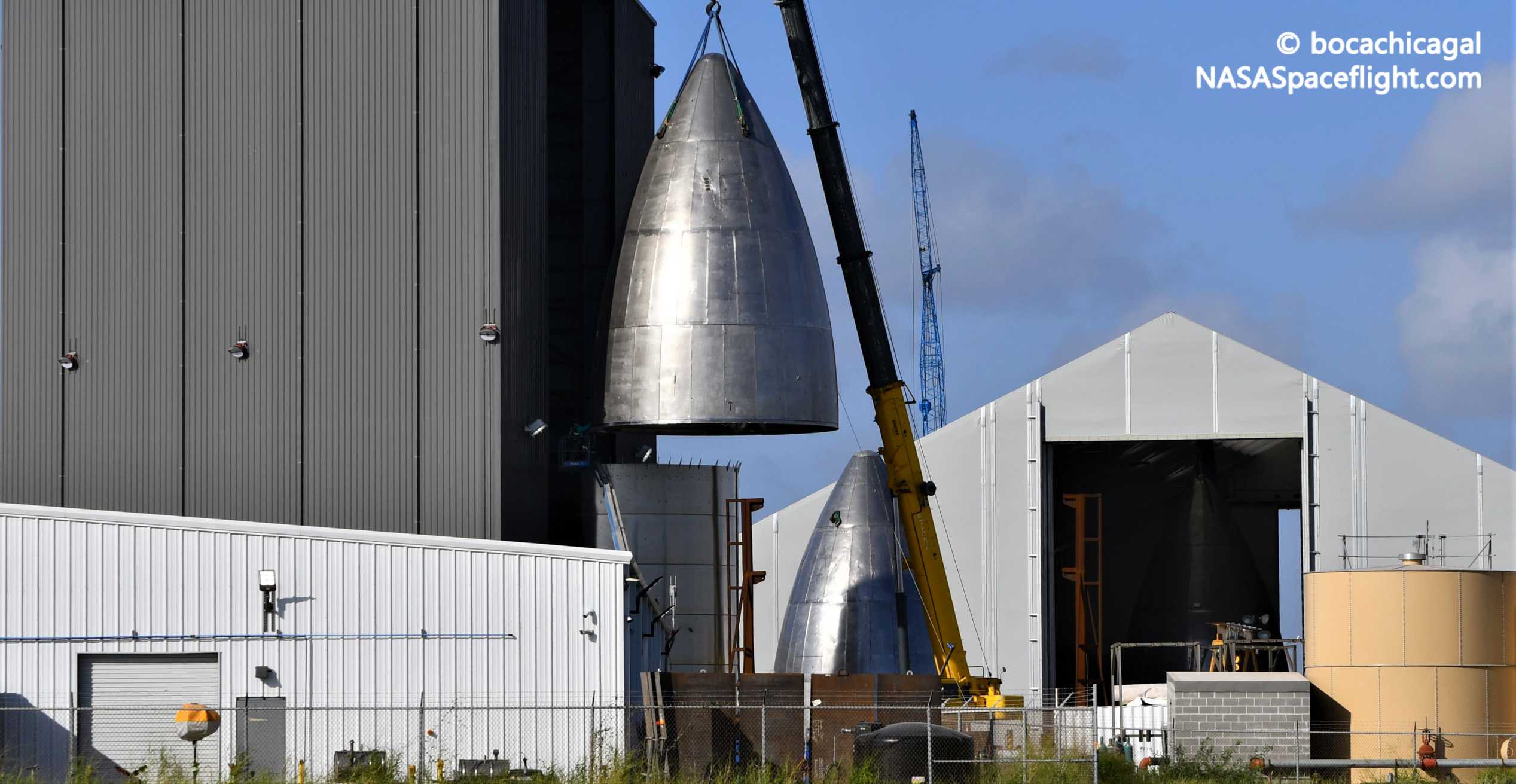 SpaceX has stacked a Starship nose section to its full height for the first time in almost a year. (NASASpaceflight - bocachicagal)

SpaceX has stacked a Starship nosecone section to its full height for the first time in almost a year, featuring an upgraded design that could soon support an ambitious series of flight tests.

Back in August 2019, SpaceX first began stacking the nose section of Starship Mk1 – the first full-scale prototype of any kind. It became clear a few months later that Starship Mk1 was more of a rough proof of concept than a full-fidelity test article, but it still became the first (and only, so far) Starship to reach its full ~50m (~160 ft) height. After serving as a centerpiece during CEO Elon Musk’s September 2019 Starship presentation, SpaceX removed the nose and attempted to test the Mk1 tank section itself, ultimately destroying the ship.

Now eight months distant from Mk1’s demise, SpaceX’s Starship R&D program has entered the prototype mass-production phase. Since January 2020, SpaceX has built five upgraded Starship tank sections (and tested three to destruction), built and tested four stout test tanks, and completed at least 4-5 new nosecone prototypes. For the first time since nosecone production began several months ago, one of the noses has finally been stacked to its full height atop five steel rings.

At the moment, SpaceX is hard at work preparing Starship SN5 for its first wet dress rehearsals (WDRs) with methane and oxygen propellant and either one or several Raptor engine static fire tests. If successful, SpaceX will quickly move to flight test preparations, readying SN5 for a nominal ~150m (~500 ft) hop, though the company is technically no longer restricted to that ceiling. For such a low-altitude test, aerodynamic features like a nosecone or flaps serve no functional purpose, meaning that SN5 is unlikely to ever receive those additions.

Roughly two miles west of the coastal launch and test site SN5 is stationed at, SpaceX has already more or less finished Starship SN6, although the newest ship’s fate is unclear. Pictured above on July 10th, the task of stacking an even newer ship (likely SN8) may already be underway. Last month, SpaceX tested a new ‘test tank’ built out of a different steel alloy said by CEO Elon Musk to be theoretically superior. Two cryogenic pressure tests seemingly confirmed that suspicion, proving that 304L stainless steel fails more gracefully than 301 while still offering similar strength at the pressures Starships operate at. The SN7 test tank was built and tested around the same time as SpaceX was finishing up SN6, implying that the ship was almost certainly built out of 301 steel.

If 304L really is the way forward for future Starship prototypes, the next step will be building an entire ship out of the steel alloy and performing a full cryogenic proof test and wet dress rehearsal. Given that SN5 and SN6 are likely identical (or nearly so), SN6 may have been made redundant before the ship even left the factory floor.

This is all to say that it’s a bit of a mystery where the first upgraded nosecone will find itself in the coming weeks. Like SN6 or SN7, it could either be redundant on arrival, built as practice, or both. It could also be the first nosecone installed on a flightworthy Starship prototype. It’s unlikely but not impossible that SN5 survives its static fires and first hops and is modified to support three Raptors and aerodynamic control surfaces, while SN8 and SN9 are more probable candidates for the first high-altitude, high-velocity test flight(s). SpaceX has at least 3-5 more Starship nosecones strewn about its Boca Chica factory, though, so odds are good that the first new nose section to reach full height won’t be the first to take flight.

For now, Starship SN5 (sans nose) is scheduled to attempt its first wet dress rehearsal (WDR) no earlier than July 16th. If successful, a static fire could follow a few days after that and a hop test another few days later.