The two halves of SpaceX's Starship prototype were separated on Tuesday, Jan 15 to allow for additional work. (NASASpaceflight - bocachicagal)

After a handful of days as an impressive monolith stood along the coastal wetlands of Texas, SpaceX technicians have once again separated the nose and tail sections of the first Starship prototype to allow additional integration and assembly work to continue. The craft’s three Raptors were also removed and stored nearby, shown to be barebones facsimiles standing in for flightworthy hardware that could arrive in the next month or two.

Up next, three or four propellant tank domes – currently being assembled and welded together on-site – will likely be installed inside the steel hull of the giant Starship prototype’s aft barrel section. Known as bulkheads, the installation of those tank domes will bring SpaceX one step closer to performing hop tests of the simultaneously bizarre, confusing, and beautiful craft.

Starship Hopper has been taken apart again (for the installation of the bulkhead etc.)

At this point in time, it appears that Starhopper is some odd combination of showmanship and actual hardware meant to test certain aspects of the first orbital Starship build, said to be complete as early as June 2019 by CEO Elon Musk. In the last week or so, SpaceX technicians attached and welded over Starhopper’s two sections – an aft barrel with legs and Raptors and a conical nose – and even did a sort of photoshoot, removing an on-site fence for a photo that Musk later shared while stating that the vehicle had “completed assembly”.

Starship test flight rocket just finished assembly at the @SpaceX Texas launch site. This is an actual picture, not a rendering. pic.twitter.com/k1HkueoXaz

One could argue that assembly is not exactly complete if the given product has to be pulled in half to install significant new components. Regardless, the external skin, aft barrel section, and rough landing legs do appear to be more or less complete from a very basic structural perspective, although there is clearly much work still to be done if the vehicle’s tank bulkheads haven’t been installed. Aside from completing the liquid oxygen and methane tank structure, SpaceX engineers and technicians will additionally have to complete the vehicle’s aft section, a massive 9m/30ft-diameter thrust structure capable of supporting the thrust of three Raptor engines and the weight of the entire fueled rocket. After that, plumbing, avionics, sensors, attitude thrusters, and more will still need to be completed and integrated.

If Starhopper’s nose section is largely a nonfunctioning aerodynamic shroud and propellant tanks will be primarily located inside the aft section, the fuel and oxidizer capacities of the vehicle’s tanks can be roughly estimated. Assuming a 9m/30ft diameter, the aft barrel stands around 13m/43ft tall. Assuming that the upper tank dome will reach a meter or two above the steel cylinder and that the aft Raptor thrust structure is also roughly 1-2 meters deep, Starhopper would have a total tank volume around 830 m3 or almost 30,000 cubic feet (~225,000 gallons), potentially 1000 metric tons of fuel or more if fully loaded. 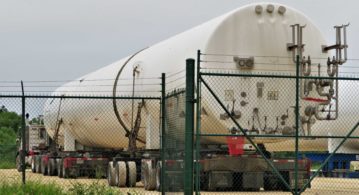 SpaceX has two of these tanks and two others that are smaller but still massive. (NASASpaceflight – bocachicagal, 10/23/18) 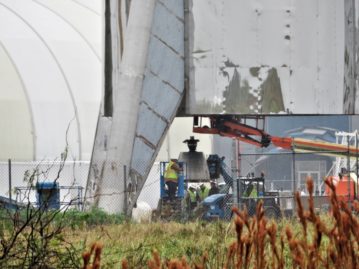 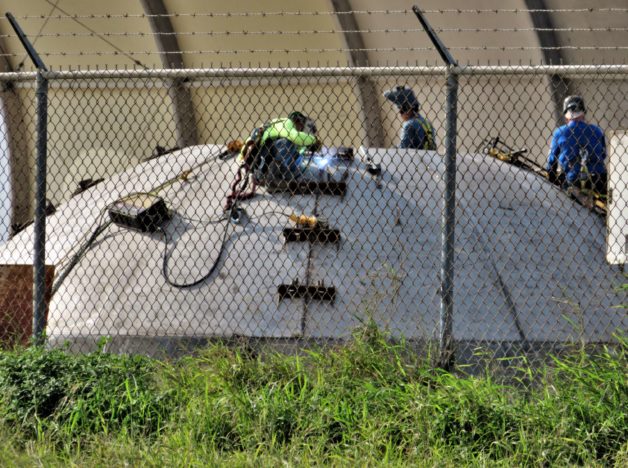 Perhaps less than coincidentally, SpaceX already has liquid methane and oxygen tanks on-site (one is pictured above) with more than enough capacity to meet Starhopper’s potential propellant needs. However, it’s worth noting that current plans (and permissions) only show Starhopper traveling as high as 5km on flights that will last no more than 6 minutes, and CEO Elon Musk has indicated in no uncertain terms that the prototype will remain distinctly suborbital and is primarily focused on fleshing out Starship’s vertical take-off or landing (VTOL) capabilities before SpaceX proceeds to much more aggressive tests.

While it would be safe to take his schedule with many dozens of grains of salt, Musk noted last week that the first orbit-ready Starship could be finished as early as June 2019, while he expects Starhopper tests to begin as early as February or March. Where exactly that orbital Starship and its Super Heavy booster partner will be built is now much less clear after SpaceX has reportedly canceled a berth lease and thus its plans to build a BFR factory in the Port of Los Angeles. Will SpaceX build a BFR factory in Texas or will it build the orbital Starship en plein air like its Starhopper predecessor? And Super Heavy? Where will all three conduct static fires, hops, or launches from?

Stay tuned as more details and photos continue to bubble up from beneath the surface.