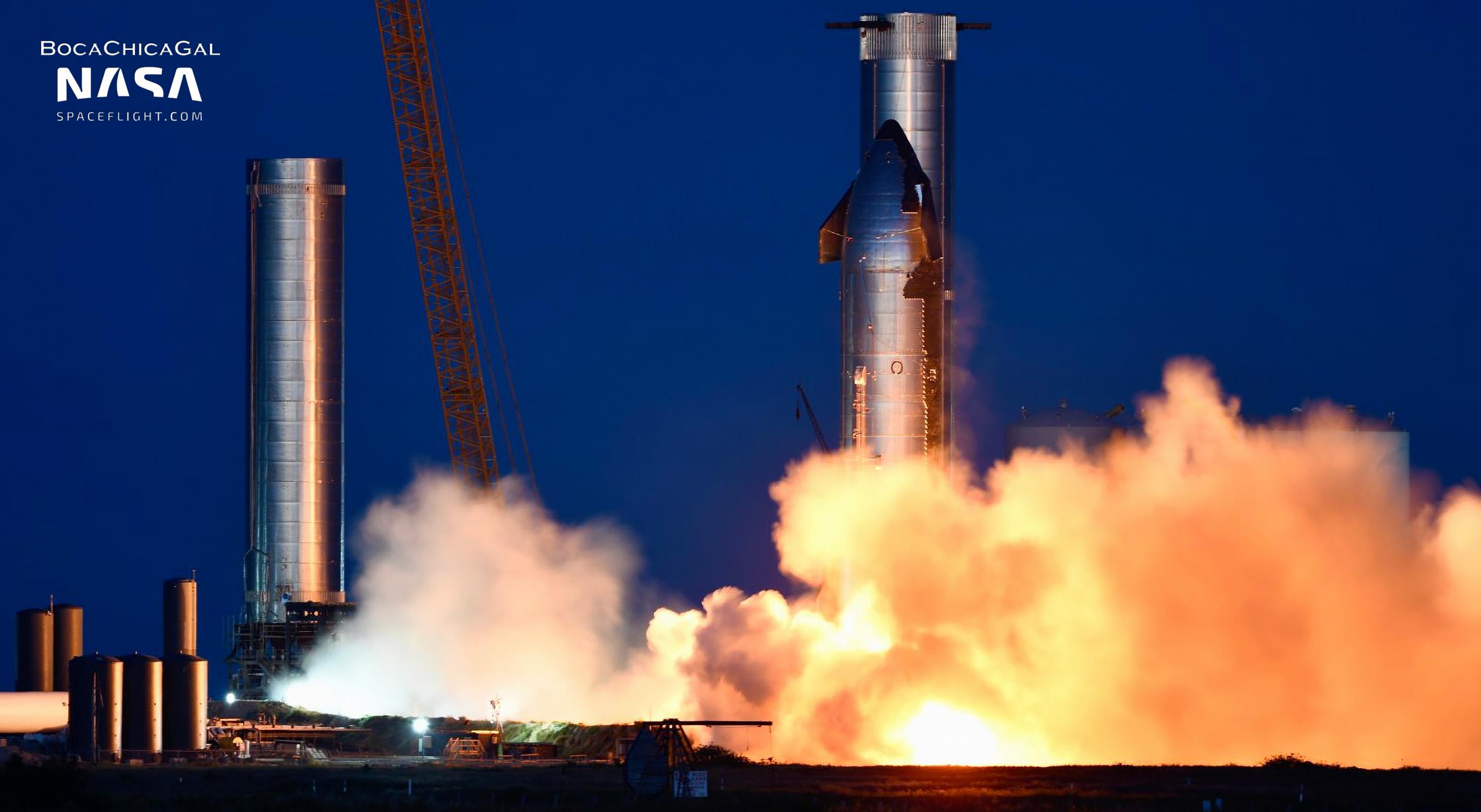 Starship S20 fires up for the first time with Super Heavy B3 and B4 in the rafters. (NASASpaceflight - bocachicagal)

SpaceX first installed Starship S20 on one of two suborbital launch and test stands more than two months ago. After almost six weeks of largely invisible work, longer than any other new Starship prototype has spent inactive at Starbase launch facilities, Ship 20 came to life for the first time during a ‘pneumatic proof’ test completed on September 27th. Two days later, put the Starship through a complex cryogenic proof test, loading supercool liquid nitrogen instead of ambient-temperature gas and simulating the thrust of six Raptor engines with hydraulic rams.

According to CEO Elon Musk, Ship 20 passed its first ‘cryoproof’ without issue, opening the door for static fire testing with real methane and oxygen (LCH4/LOx) propellant and Raptor engines. However, for unknown reasons, it would ultimately take SpaceX more than three weeks of additional work to prepare Starship S20 for its first engine-involved test.

On October 19th, near the end of a seven-hour test window, Starship S20 sort of fired up for the first time, completing what is known as a preburner test. Effectively the first half of static fire test without full ignition, it was nevertheless the first time a Raptor Vacuum engine was operated on a Starship prototype. Originally, based on road closures scheduled with Cameron County, Texas, that preburner test and associated static fire testing was initially scheduled to begin as early as Friday, September 31st.

SpaceX continued to file for and cancel closures throughout the next week, culminating in a few local residents receiving a routine safety notice about a possible test on October 13th. That attempt was canceled soon after and SpaceX ultimately distributed alerts for tests on October 14th and October 18th. Ship 20’s first preburner test was completed on the 19th, followed by another soon-to-be-rescinded notice on the 20th.

Finally, after perhaps the windiest road yet for a Starship from cryoproof to static fire, Starship S20 sailed through a static fire test flow on October 21st and ultimately fired up for the first time ever at 7:16 pm CDT (00:16 UTC). In perfect opposition to weeks of unprecedentedly slow testing, Starship S20 not only completed its first true static fire early in the test window, but it completed the first on-vehicle static fire of a Raptor Vacuum engine and then, just over an hour later, performed a second static fire – this time simultaneously igniting both a Raptor Vacuum and Raptor Center (sea-level-optimized) engine. Aside from also marking the first time that two Raptor variants have been simultaneously fired on the same vehicle, Starship S20’s two-test surprise was technically the fastest back-to-back static fire SpaceX has ever completed, beating Starship SN9 by about 15 minutes.

Back in January 2021, SN9 completed an unprecedented three back-to-back-to-back Raptor static fires in less than 100 minutes as part of what Musk described as “[a day] about practicing Starship engine starts.” SN9 ultimately completed two of those tests in 75 minutes, setting a niche but still impressive turnaround record. Starship S20, however, managed two static fires in 62 minutes on October 21st.

With any luck, Ship 20’s unexpected first-test milestones will mark the start of a more energetic period for the orbital-class prototype, potentially building up to the first Starship static fire with more than three Raptors and the first test with all six engines installed. Super Heavy Booster 4 is also well overdue for its own proof and static fire test campaign, virtually all of which will be new territory for SpaceX.