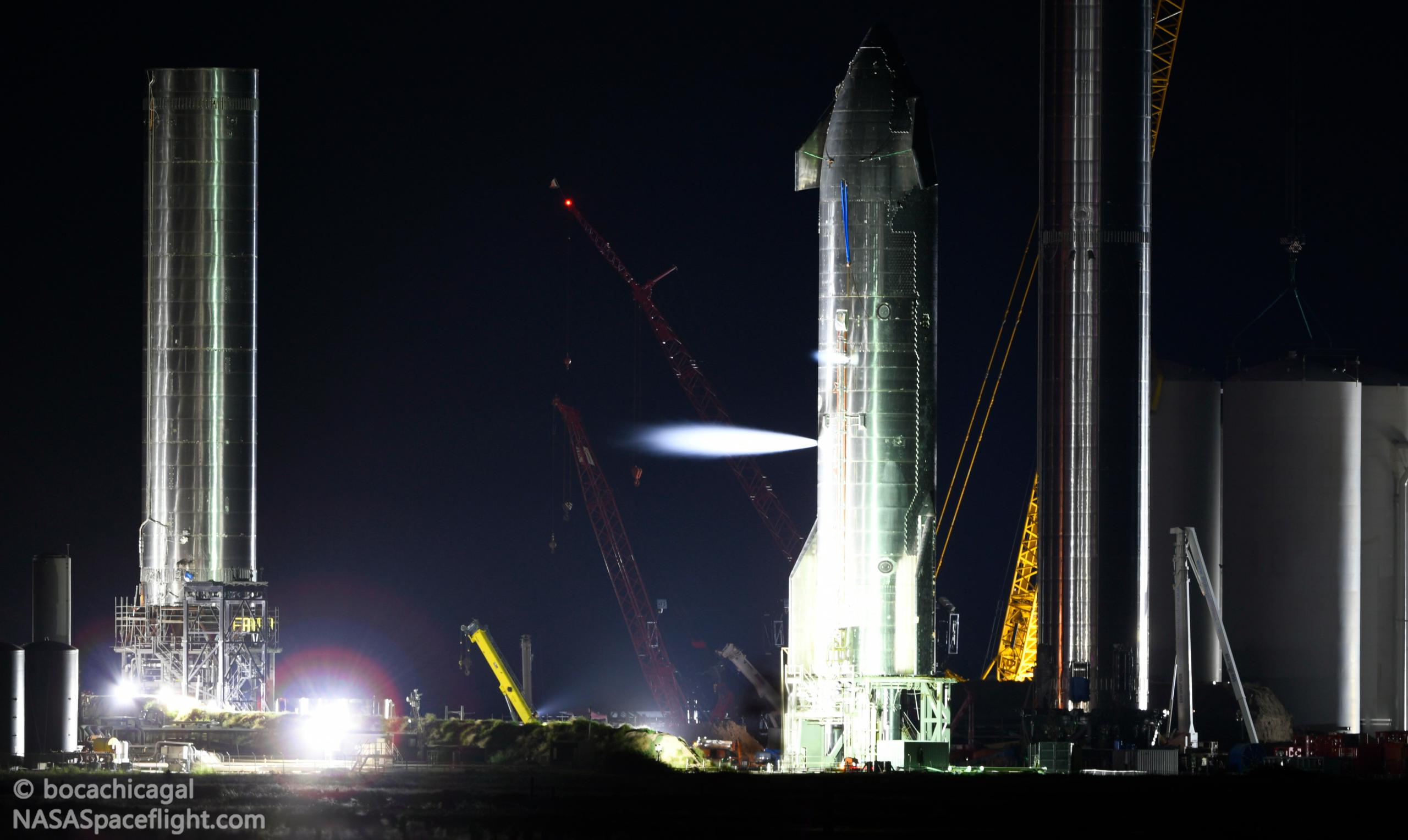 Framed by Super Heavy boosters B3 and B4, Starship S20 comes to life for the first time. (NASASpaceflight - bocachicagal)

After weeks of mostly invisible – albeit slow and steady – work at Starbase’s suborbital launch and test facilities, SpaceX has finally kicked off the first orbital Starship prototype’s first test campaign.

Almost two months ago, Starship 20 (S20) departed the factory it was built in for the first time and was rolled a few miles down a South Texas highway to Starbase’s nascent orbital launch site. There, SpaceX briefly installed Ship 20 on top of Super Heavy Booster 4 (B4) – an important first and one done with the same ship and booster pair CEO Elon Musk says could eventually support the rocket’s inaugural orbital launch attempt. Mere hours after that August 6th photo opportunity and fit test, Ship 20 was rolled back to the Starbase build site for another week of work before again returning to the launch site.

This time around, Starship S20 headed for one of two suborbital launch and test stands and ultimately spent the better part of the next six weeks sitting in place as workers swarmed around the 50m (~165 ft) tall spacecraft and upper stage to prepare it for the next steps. In theory, those steps were simple enough, beginning with the completion of two basic qualification tests – the same tests that a half-dozen prototypes preceding Ship 20 completed without issue.

Effectively SpaceX’s first Starship or Super Heavy test of any kind in more than two months, it thankfully didn’t take long for things to get interesting. Before the pad had even been cleared of the last few remaining workers, Starship S20 violently shed a good dozen or so fragile heat shield tiles. CEO Elon Musk quickly confirmed speculation that Starship S20 had effectively jetted the tiles off its nose during a brief test of high-pressure cold gas maneuvering thrusters, coincidentally around the same time as SpaceX began to pressurize the rocket for its first tests.

Going into what was believed to be Starship S20’s first ambient-temperature pressure test and cryogenic proof test, the loss of some heat shield tiles was almost universally expected. In a structure as large as Starship, even just the thermal contraction of steel at supercool temperatures (and expansion as it warms back up) could change the rocket’s diameter an inch or so, potentially causing tiles to scrape or press against each other. About the size of a dinner plate and the thickness of an average paperback book, Starship’s ceramic heat shield tiles have proven to be very fragile, with dozens routinely chipping, cracking, and shattering during and after installation on Ship 20.

One unique (and no less unproven) aspect of Starship is SpaceX’s decision to mount its heat shield directly to the thin steel propellant tanks and skin that make up the rocket’s entire airframe. SpaceX’s first stab at the problem involves studs/pins welded – by robot – directly to the exterior of Starship’s tanks and skin. By embedding small metal plates inside each cast tile, they can be easily installed by aligning the tile and pressing it against each set of three barb-like pins, which then irreversibly lock in place. Over most of Starship’s hull, SpaceX then tacks on blankets of off-the-shelf ceramic wool insulation before tiles are installed on top of that steel and blanket sandwich. Compared to the Space Shuttle and Russia’s Buran, the only other orbital spacecraft to fly with non-ablative heat shields, Starship’s thermal protection system (TPS) is incredibly simple. Of course, the challenges imposed on heat shields by mechanical stresses during launch/landing, orbital reentry, and a need for rapid reusability are anything but simple.

As such, to see tiles blown off Starship S20 by cold gas maneuvering thrusters that were simply placed too close to adjacent TPS was an unexpected route to an expected outcome. During Monday’s nine-hour test window, SpaceX appeared to partially or fully pressurize Starship S20 at ambient temperatures before aborting a cryogenic proof test either before or just after it began. While an ambient-temperature proof was the easier of the two tests on the docket, it’s still encouraging to see no obvious tile loss caused by the actual mechanical stresses involved in the test.

Most importantly, compared to losing dozens of tiles to regular mechanical or thermal stresses, fixing an issue with thruster impingement is much easier and should only require a few design tweaks to one specific Starship component. The real nail-biting moments will come during Starship S20’s seemingly imminent cryogenic proof and static fire debuts, major TPS issues during either of which could necessitate vehicle-wide design changes and cause delays.

With any luck, whatever forced SpaceX to abort Starship S20’s first cryogenic proof test can be easily rectified, opening the door for additional attempts. Two more test windows are scheduled later this week from 5pm to 11pm CDT on Tuesday and Wednesday. Rewatch today’s brief testing below.