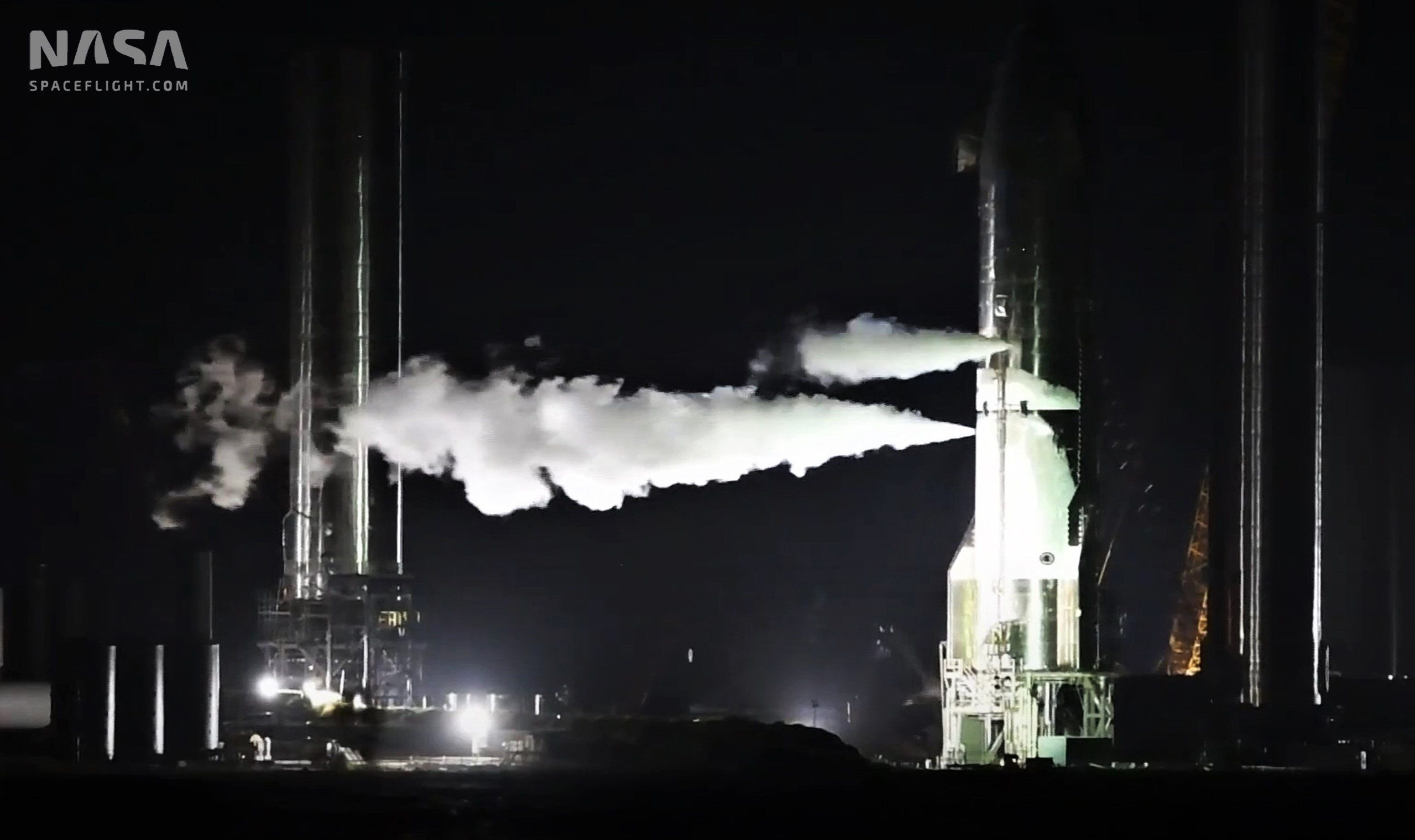 Starship S20 lets off some steam with a vent 200+ feet long during its first cryoproof test. (NASASpaceflight - bocachicagal)

For the first time, SpaceX has put the first orbital-class Starship – a prototype known as Ship 20 (S20) – through a routine cryogenic proof test, filling the rocket with several hundred tons of liquid nitrogen to simulate its explosive propellant.

While it’s impossible to jump to conclusions before members of the public can return to the pad to take photos or CEO Elon Musk takes to Twitter to discuss the results, Ship 20’s first ‘cryoproof’ appears to have been largely successful [Edit: Musk has confirmed that the test went well]. Relative to the almost three-dozen cryoproofs SpaceX has completed with more than a dozen other Starship, booster, and test tank prototypes over the last two years, though, Ship 20’s first major test still has some oddities.

Historically, every cryoproof of a full Starship prototype has been visually unique and virtually impossible to predict. Without any direct insight from SpaceX or Elon on the objectives, plan, or timeline of tests, the process of watching tests (via unofficial webcams, of course) and attempting to interpret why certain things look the way they do or what’s going on at any given moment is a bit trying to interpret eroded hieroglyphics.

At the most basic level, cryogenic tanking tests – whether with Starship, Super Heavy, or test tanks and liquid oxygen (LOx)/methane (LCH4) propellant or neutral liquid nitrogen (LN2) – are fairly simple. The vehicle is attached to pad systems, powered on, and partially or fully loaded with cryogenic fluids. Once the desired test objectives are achieved or attempted, the vehicle is then detanked (drained of propellant or LN2).

Thanks to the fact that they’re incredibly cold (-160 to -200C; -260 to -330F), the LOx/LCH4 or LN2 Starships are filled with quickly chill the thin steel tanks containing them. With no insulation to speak of, that supercooled steel then freezes water vapor out of the humid South Texas air, creating a layer of frost/ice that generally follows the level of the cryogenic liquids in Starship’s tanks. Throughout that process, those cryogenic liquids inevitably come into contact with ambient-temperature Starship tanks and plumbing (white-hot in comparison) and warm up, boiling off into gas as a result.

A gaseous chemical is far less dense than its liquid form, meaning that the pressure inside Starship’s fixed tanks can rapidly become unmanageable after even a small amount of boiloff. To maintain the correct tank pressures, Starship – like all other rockets – occasionally vents off the gas that forms. And thus, the two main methods of interpreting the hieroglyphics that are cryoproof tests: frost levels and venting.

Compared to earlier prototypes, Starship S20’s first cryoproof has been… unusual. Most notably, SpaceX began loading the rocket with liquid nitrogen around 8pm CDT. Its LOx (bottom) and CH4 (top) tanks were then slowly filled to around 30-50% of their full volume over the next hour. However, rather than detanking, SpaceX then partially drained the methane tank but filled the LOx tank further before leaving the LOx tank more or less fully filled for more than two hours, occasionally topping it off with fresh liquid nitrogen.

Then, almost four hours after LN2 loading began, Starship performed several massive vents. Ordinarily, given the hours of testing prior, those vents would have assuredly been detank vents – effectively depressurizing Starship’s tanks as they’re drained of fluid. However, those vents instead coincided with the rapid loading of one or several hundred more tons of LN2, seemingly topping off Starship S20 in the process. Around that point, it’s possible that SpaceX began the pressure testing portion of Ship 20’s cryoproof, (mostly) closing the rocket’s vents and allowing the pressure to gradually increase to flight levels (and maybe even higher).

Many, many months ago, when SpaceX was deep into cryoproofing the first full-size Starship prototypes, Musk revealed an operating pressure goal of 6 bar (~90 psi). Ships were eventually successfully tested above 8 bar (~115 psi), giving Starship a healthy ~30% safety margin. As the first orbital-class Starship prototype, Ship 20 likely needs to hit those tank pressures more so than any ship before it to have a shot at surviving its orbital launch debut and orbital-velocity reentry attempt.

Beyond the basics of cryoproofing, Starship S20 also marked a crucial step forward on September 29th/30th, becoming the first ship to complete a cryoproof test with a full heat shield installed. While it’s impossible to judge exactly how well S20’s ~15,000-tile heat shield performed, views from public webcams showed no obvious signs of tiles shattering and falling off as Starship repeatedly cooled and warmed – contracting and expanding as a result. Additionally, still in contact with the air, the steel tank skin under a majority of Ship 20’s tiles would have likely covered itself in a layer of frost and ice, but the heat shield appeared to handle that invisible change without issue.

It’s possible that dozens or hundreds of tiles bumped together and chipped or cracked in a manner too subtle to be visible on LabPadre or NASASpaceflight webcasts, but that can only be confirmed or denied when the road reopens and local photographers can capture higher-resolution views of Starship. For now, it appears that Ship 20’s first cryoproof was highly successful, hopefully opening the door for Raptor installation and static fire testing in the near future. Stay tuned for more!

Update: As is almost tradition by now, SpaceX CEO Elon Musk didn’t take long to tweet about the results of Starship S20’s first cryoproof, confirming that the “proof was good!”