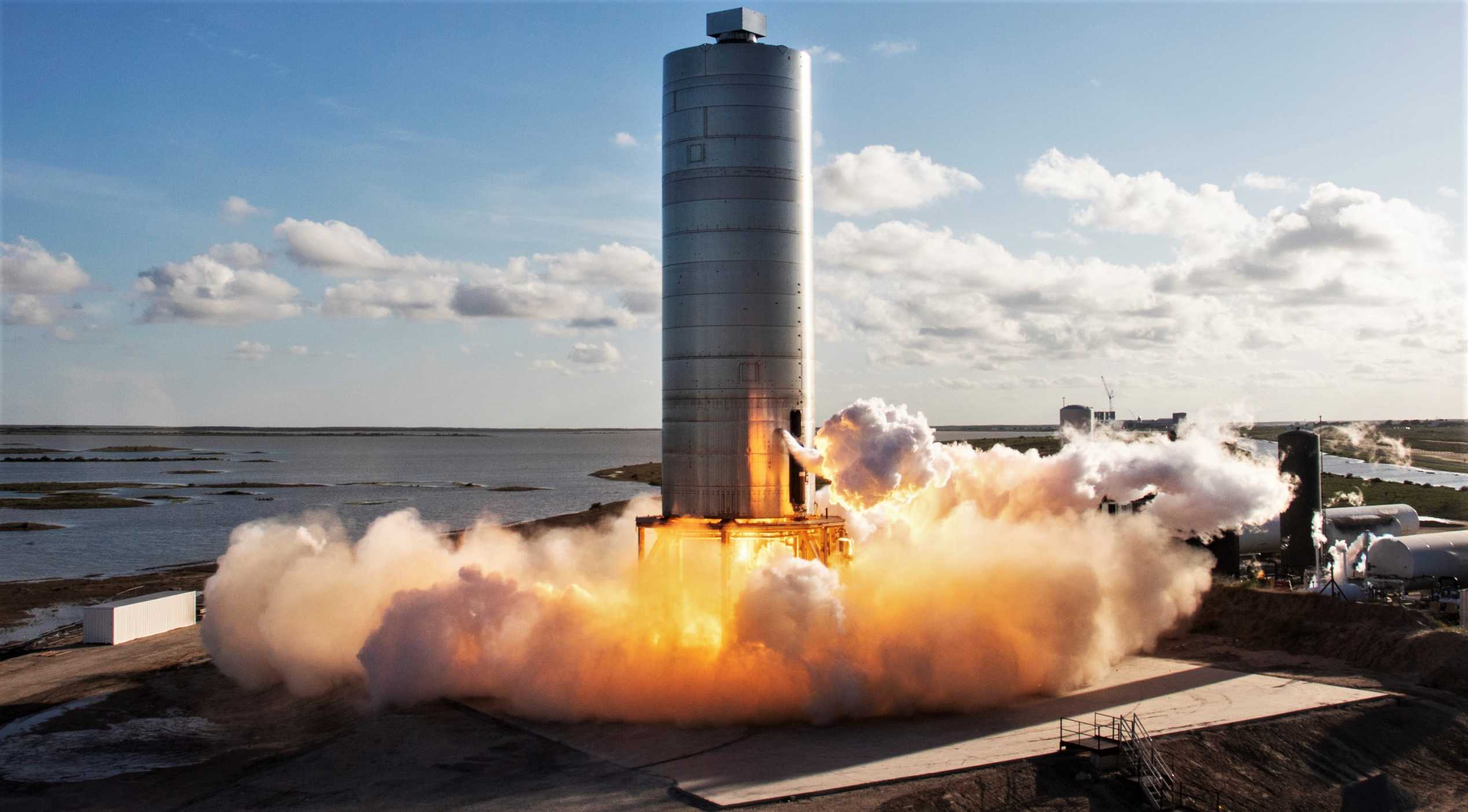 This photo of Starship SN5's August 4th hop debut is effectively exactly what SN6 went through - short of actually lifting off - on August 23rd. (SpaceX)

SpaceX has successfully fired up a new Starship prototype’s Raptor engine, putting the company on track for its second Starship hop test as soon as this week.

The milestone comes not long after SpaceX Starship serial number 6 (SN6) completed its first cryogenic proof, a pressure test with liquid nitrogen (LN2) used to safely verify the structural integrity of tanks (and rockets, in particular). Measuring 9m (30 ft) wide and some 30m (~100 ft) tall, SpaceX rolled Starship SN6 from its Boca Chica, Texas factory to a nearby test and launch facility on August 11th and wrapped up its first acceptance test on August 16th.

Now, just seven days after its cryo proof, SpaceX has installed a new Raptor engine (SN29), prepared SN6 for a much riskier round of tests, and completed a static fire with said engine, leaving just one major step between the Starship and its hop debut. Of course, the process still had its fair share of hiccups.

SpaceX’s first SN6 static fire test window – published by Cameron County in the form of road closure notices – was set for 8 am to 8 pm CDT (UTC-5), August 23rd a few days after the Starship’s cryo proof. The first test attempt began around 9:30 am but was aborted soon after as SpaceX employees returned to the launch pad to (presumably) troubleshoot. The second attempt began around 2:30 pm, leaving a little less than half the test window available.

Attempt #2 very nearly managed to extract a static fire, aborting possibly a second or less before Raptor ignition around 3:41 pm. Once again, SpaceX teams returned to the pad after Starship was detanked and safed, briefly inspecting the general location of the rocket’s Raptor engine before once again clearing the pad around 6:30 pm. At long last, Starship SN6 began a smooth and fast flow that culminated in the ignition of Raptor SN29 around 7:45 pm, just 15 minutes before the end of SpaceX’s test window.

As with all SpaceX static fires, engineers must still analyze the data produced – and possibly inspect pad or rocket hardware – to verify vehicle health before proceeding into launch operations. Unlike all other SpaceX static fires, the company doesn’t announce the results of those tests – nor the solidified launch window – during prototype development programs. In the context of iterative aerospace development, while there may be such a thing as a “good” or “bad” test, all tests – as long as they’re performed safely and produce a large quantity of usable data – are essentially successful.

As such, it’s likely for the best that SpaceX doesn’t put the public focus on the “success” of any given test. Still, it means that unofficial educated guesses are typically the only way to determine the results of any given test and how those results impact the next steps. For SN6, the very broad-strokes conclusions one can draw from unofficial livestreams suggest that the Starship’s first Raptor static fire was a success. Assuming that the unknown cause(s) of the day’s two prior aborts were minor and easily rectified, SpaceX is likely exactly on schedule for Starship SN6’s first hop attempt.

SN6’s first flight is expected to be an almost identical copy of Starship SN5’s highly successful August 4th debut, following the same 150m (~500 ft) parabolic trajectory. Filed before SN6’s August 23rd static fire, SpaceX has penciled in Friday, August 28th for Starship SN6’s own hop debut. Thanks to the fact that SpaceX was able to complete both SN6’s cryo proof and static fire on the first day of their respective test windows, August 28th is likely well within reach. Stay tuned for updates as Starship SN6’s hop debut schedule solidifies.