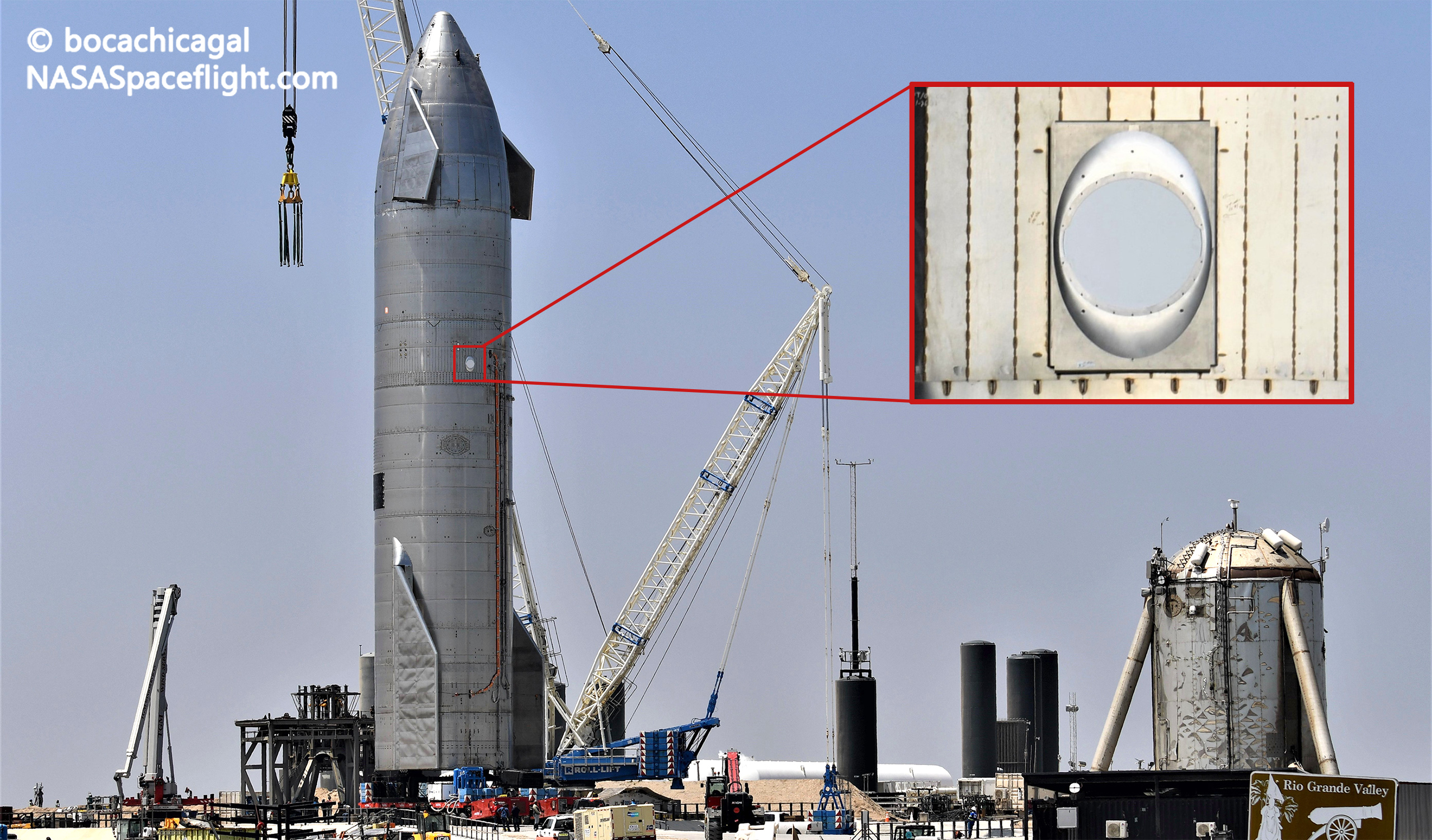 SpaceX has installed a Starlink dish on Starship SN15 and requested permission from the FCC to use the antenna both on the ground and in flight. (NASASpaceflight - bocachicagal)

In the latest in a long line of twists, SpaceX has requested permission from the FCC to operate a Starlink internet antenna installed on Starship serial number 15 (SN15).

The first in a planned batch of four or more upgraded Starship prototypes, SN15 was rolled a mile down the road from SpaceX’s South Texas factory to its suborbital launch pad late last week. Around the same time that its aft tank section was being prepped for nose installation on April 3rd, some of the first 360-degree views of the rocket revealed an unusual porthole-esque addition just above the Starship’s forward tank dome. As far back as Starhopper in 2019, Starships have used that space between tank and nosecone as an installation point for avionics, Tesla batteries, and a number of radio and GPS antennas, among other things.

The new hardware generally fell under the radar but most that took note assumed it was some kind of antenna upgrade. As it turns out, that speculation was almost certainly correct – but not in the way most expected.

When SN15’s new antenna first appeared, the author speculated that it bore a striking resemblance to a SpaceX Starlink dish. However, another forum user argued that it was more likely an upgraded S-band antenna akin to those used on SpaceX’s Falcon rockets. The author later noted that the S-band antenna pass-through located on the interstage of Falcon boosters was almost the same size as the new antenna and shroud visible on Starship SN15, seemingly closing the case.

Nine days later, SpaceX asked the FCC for permission to operate a Starlink dish (user terminal) in Boca Chica “at altitudes not to exceed 12.5 km” during operations “on the ground or during test flights.” In other words, the antenna installed on Starship SN15 is almost certainly a Starlink dish. Surrounded by an aerodynamic shroud, the antenna is firmly fixed on the rocket and would rely entirely upon cutting-edge phased array beamforming to electronically ‘steer’ itself to both transmit and receive from one or more of almost a thousand operational Starlink satellites currently in orbit.

In SpaceX’s FCC Special Temporary Authority (STA) request, the company curiously asked for the 60-day test period to begin on April 20th. Even if the FCC moves extremely quickly and grants the STA within a few days to a week of SpaceX’s April 9th request, it’s unlikely that the company would delay Starship SN15 test or launch plans by almost ten days to wait for permission to use the rocket’s new Starlink antenna. In other words, while SN15 is the first Starship to have a Starlink antenna installed, there’s a decent chance it won’t be the first to actually put that capability to the test – both on the ground or during a launch.

While unlikely, the fact that SpaceX’s Starship SN15 Starlink antenna installation is almost the same size as Falcon 9’s reliable but far more basic S-band setup also begs the question of whether success on Starship test flights could eventually lead to the addition of Starlink dishes on future Falcon boosters. Regardless, Starship SN15 is on track to kick off a busy week of qualification testing in South Texas. If the rocket suffers any significant delays, as has admittedly been the norm for Starship prototypes, there’s a good chance SN15 could begin testing its Starlink dish around the middle of next week.