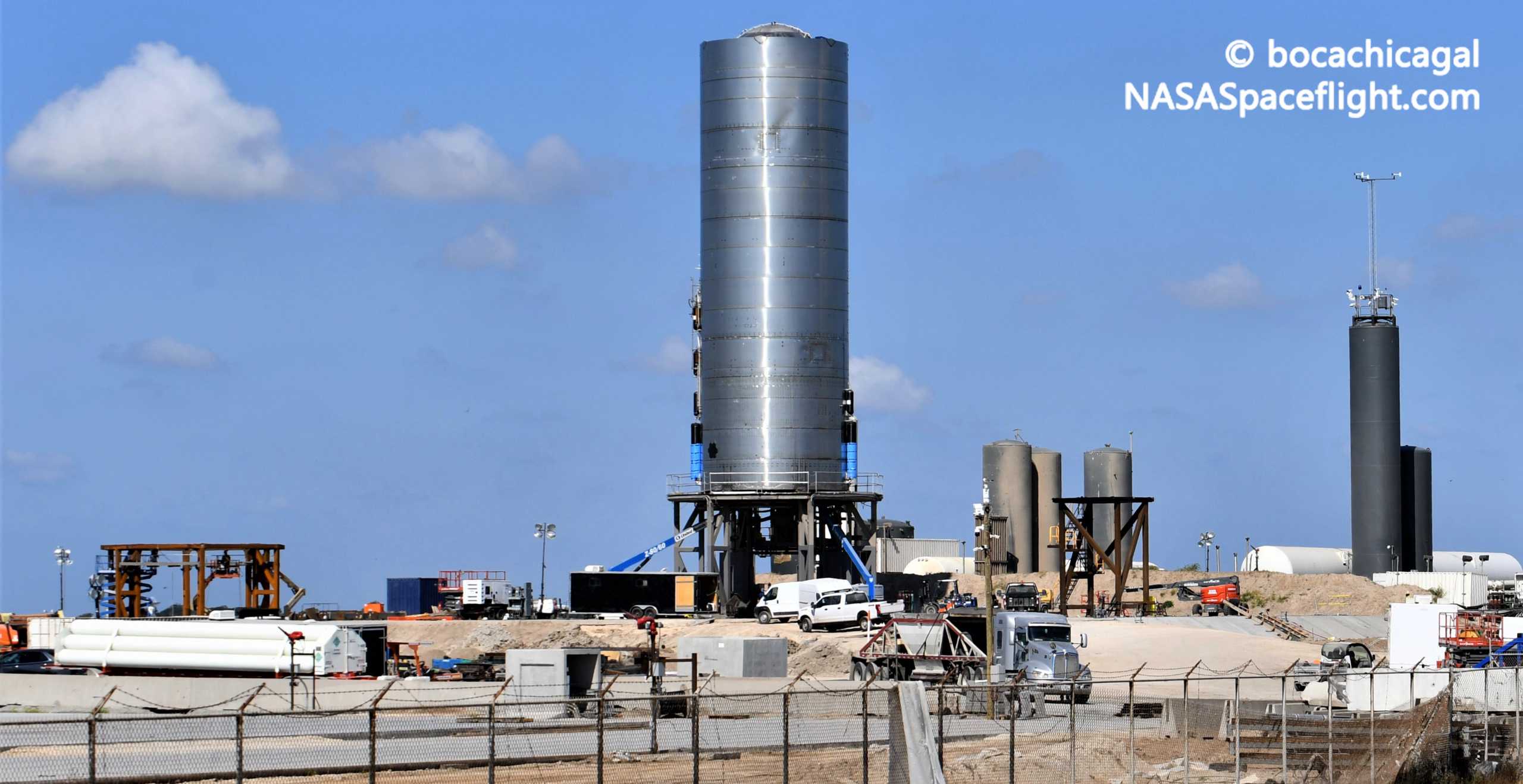 Around the same time SpaceX was preparing for its 100th Falcon rocket launch, bad Texas weather forced the company to abort its second Starship hop test of the month.

Since that abort, SpaceX’s near-term Starship test plans have begun to solidify, offering a clearer picture of what to expect over the next week or two. Pending better weather at its Boca Chica, Texas test facilities, Starship serial number 6 (SN6) is still first in line and has been preparing for its hop debut ever since the prototype completed a Raptor engine static fire test on August 23rd.

Measuring approximately 30m (~100 ft) tall, SN6 is a full-scale Starship tank and engine section – the bottom ~60% and business end of the reusable orbital spacecraft. Of course, SpaceX has a ways to go before Starship is actually ready for its first orbital test flight, let alone reuse after such a test flight, but the company did take its biggest step yet towards that lofty ambitions with Starship SN5’s successful August 4th hop debut.

Effectively twins, Starship SN5 and SN6 have since been expected to take turns completing “several” hops to improve SpaceX’s familiarity with Starship launch operations and work towards a smooth procedure that can be completed multiple times per day. With SN6 now scheduled to hop no earlier than 8am CDT (UTC-5), September 3rd, 29 days after SN5’s debut, SpaceX still has its work cut out for it.

Nevertheless, SN5’s 150m (~500 ft) hop was the first flight of any kind for a full-scale Starship prototype, as well as the first use of an entirely new landing leg design and Raptor’s first flight in almost a year. In the history of rocket development, there is no precedent for launching and landing a prototype rocket and then repeating the same test with an entirely new prototype less than a month later.

Additionally, most of the 29 days since SN5’s first hop have been spent preparing Starship SN6 for a crucial “cryo proof” qualification test. Had that cryo proof been completed before SN5’s hop debut, SN6 could have been ready to fly as few as ~10 days later. That still leaves SpaceX a long ways away from multiple Starship hops per day but does offer encouragement that flight-proven Starship SN5 could be ready for its second hop not long after the pad is clear.

However, it appears that SpaceX instead plans to follow up SN6’s hop debut with a new ‘test tank’ meant to demonstrate an upgraded Starship “thrust puck” built out of a different steel alloy. Known as Starship SN7.1, the test will follow on the heels of a more traditional tank (SN7) that completed a record-breaking pressure test in June 2020 and proved that Starship would likely be better off with a different steel alloy.

While SN7 was a basic test tank (two domes and a few steel rings), SN7.1 adds a skirt section at its base and replaces the aft dome with a thrust dome. Likely built entirely out of a steel alloy closer to 304L than the 301 SpaceX has used for all prior Starship prototypes, that thrust dome features a new ‘thrust puck’ – the structural element Raptor engines attach to and transmit their thrust through.

Unlike past single tank tests, SN7.1 will be put through something more like a full prototype’s cryo pressure test. SN7.1 will be installed on a launch mount, allowing its skirt clamps to firmly secure the prototype to the stand, itself secured to a concrete slab on the ground. That launch mount also allows SpaceX to install a hydraulic ram designed to mechanically simulate the thrust of 1-3 Raptor engines without the risk involved in an actual static fire. SN7.1 is scheduled to begin testing no earlier than (NET) 8 am CDT (UTC-5), September 6th – just three days after SN6’s next planned hop attempt.